Washington DBs popular in 2nd round, Mixon to Bengals 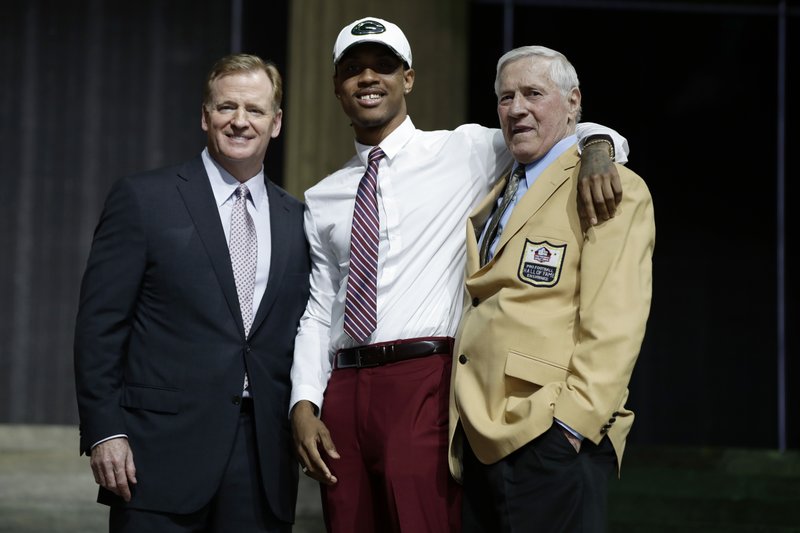 PHILADELPHIA (AP) — It's Philly, so of course they booed.

Not everything got jeered on the second day of the grab bag. The most popular group in the second round came from nearly 3,000 miles away from Philadelphia: the Washington Huskies secondary.

None of those choices drew the attention that Cincinnati's pick at No. 48 overall did: Mixon, who was uninvited to the scouting combine because he was videotaped punching a woman in the face, breaking bones.

He punched Amelia Molitor during an altercation at a restaurant, and was suspended from the team for a year. He came back and had two strong seasons. In 2016, he was an All-Big 12 performer who set the school record for all-purpose yardage in a season.

Fans in the draft theater booed lustily when Bengals Hall of Famer Anthony Munoz announced the choice. Cincinnati has a history of bringing players with off-field problems to the roster.

"For some of our fans, probably (they'll) pause for a second," Bengals coach Marvin Lewis said. "But this thing's got to move forward, and he's got to move on. He's lived with this since the day it's occurred."

Another running back who dropped to Round 2 was Florida State All-American Dalvin Cook. He slipped from the first round because of off-field issues and some injury concerns. Cook is a big-play guy and the Vikings, of course, let go of Adrian Peterson this year.

"You've got to accept things as a man, and I just was waiting my turn," Cook said.

The Steelers took a local standout, running back James Conner of Pitt. Conner overcame cancer to return to the Panthers, and now he gets to stay home in the pros.

Earlier, King's extra-long stay at the draft turned out to be a short stint.

The Washington cornerback was taken by Green Bay as the first selection in the second round. One of five players who were on hand and were not taken in the opening round, the 6-foot-3 former safety isn't particularly speedy, but has the size and aggressiveness pro teams seek.

Plus, the Packers, who acquired the spot from Cleveland in a deal Thursday night through which the Browns got Miami tight end David Njoku, were ravaged by injuries in the secondary last season.

"I am a playmaker, somebody who will go get the ball," King said. "I think everyone wants somebody like that in the secondary.

King was joined by secondary mate Baker on Friday night when Arizona took the Washington safety.

Then the Eagles added yet another Huskies defensive back, selecting Jones. Jones tore his Achilles tendon at his pro day and might not be healthy for the 2017 season.

Through 64 selections, 18 defensive backs had gone, the most for two rounds of any draft.

Cleveland was expected to add a quarterback at some point and did so at No. 52 with Notre Dame's DeShone Kizer. The Browns have started 26 quarterbacks since 1999, when they returned as an expansion team.

Two more QBs went Friday: Davis Webb of Cal to the Giants and C.J. Beathard of Iowa to San Francisco, both in the third round.

Accompanied by former Eagles quarterback Ron Jaworski, an icon in Philadelphia, Goodell thanked the city and the fans — folks in the theater still booed him, but not when "Jaws" repeated the tribute.

Then Jaworski admitted he had been the object of the boo-birds in Philadelphia during his career, drawing cheers. But the jeers were back, as loud as ever, when Goodell stepped back to the microphone to open the second night.

They reached a crescendo when Pearson came onstage to announce the Cowboys' choice at No. 60. With every boast about America's Team and every Cowboys name Pearson uttered, the noise level increased.

"I want to thank the Eagles fans for allowing me to have a career in the NFL," Pearson said with a wide smile.

Seattle, which also traded out of the first round, was at it again. On Thursday, the Seahawks sent the No. 26 overall to Atlanta, then also dealt the No. 31 slot it received from the Falcons to San Francisco in what was a wild opening night of the draft.

Instead of using the 34th spot, Seattle traded it to Jacksonville, which grabbed Alabama tackle Cam Robinson, projected by many as a first-rounder. With their picks of running back Leonard Fournette and Robinson, the Jaguars are trying to build a ground game around inconsistent quarterback Blake Bortles.

Seattle finally made a pick, taking Michigan State defensive tackle Malik McDowell with the third selection of the night.

Oddly, the first five spots in the second round were traded.

So was the ninth, where Minnesota went for Cook.

Chicago, which made headlines with a massive trade to move up one spot on Thursday to get QB Mitchell Trubisky, dug into Division II in the second round, taking tight end Adam Shaheen of Ashland.