Muskan, a 15-year-old 9th grader at Tribhuvan Hanuman Secondary School, Reshamkothi in Parsa district was attacked by three teenage boys on September 6 and left with critical burns to the face, chest and hands.

Shamshad Alam, Sajid Miyan Hajam and Raiful Miyan, the acid attackers, are all Khatun's neighbors. They have been arrested. Investigations showed that the attack was carried out after she rebuffed an approach by one of them. The victim was rushed to Narayani Hospital in Parsa and later referred to Kirtipur Hospital in Kathmandu.

Soon after reports about the acid attack spread on social media, many people reached out to show their concern and support. And recently, Bollywood celebrities Kriti Sanon and Varun Dhawan took on social media with kind messages wishing her proper treatment and encouraging her to stay strong. 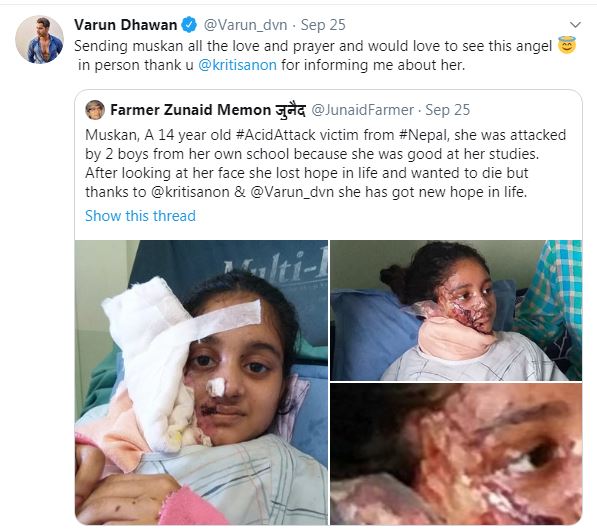 On Wednesday, Dhawan posted a video on twitter saying in part: “Hi Muskaan...I just wanted to tell you that you're doing a great job. Keep resting, keep getting better. I want you to be healthy again so that you can get back to study and chase the passion of yours. I'm sure [with] your spirit and passion, you will make you parents proud...I hope I'll get to meet you after you get fine”.
A video posted by social activist Ujjwal Bikram Thapa on twitter shows Muskan smiling and reacting excitedly to the message from her favorite actor. Speaking with difficultly in a shaky voice, Muskan asked, “Am I seriously going to meet him?”

Thapa has been helping her since the acid attack and he managed a video chat for her with actress Kriti Sanon. An earlier video that Thapa posted on twitter shows Muskaan talking to the actress on the phone. She said, “I love you, I've watched all your films.” Thapa added, “Your co-star Varun Dhawan is Muskan's favorite actor. If you can, please tell him to write a small message”.
In reply Sanon says, “I love you too, please stay bold and be fine soon. I'll surely convey your message to Varun”.

The same day Bollywood actor Jameel Khan also spoke to Muskaan over the phone to boost her spirits.

“My motive is to motivate Muskan... in cases like this, the victims truly require moral and emotional support,” Thapa told Republica.

Thapa went on to stress that he has two demands with the government. “The availability of acids should be controlled and acid attackers should get like life imprisonment,” he said.
Not only Dhawan and Sanon but fellow Bollywood actor Akshay Kumar also showed his concern. On Sept 20, Thapa posted on twitter that Kumar had called to wish her healthy treatment and extend his support for her throughout this journey.

Undoubtedly as a result of all this warm support, Muskan is getting better. “She has now started to smile and her condition is improving,” said her father Rasul Ali. “Recently, the doctors said our little angel is out of danger. I am thankful to all those wishing for her betterment and praying for her. We are very touched.”

The acid attack survivor has also been receiving support from other notable figures in entertainment. On Wednesday, singer Raju Lama of the Mongolian Heart band paid a visit. He sang his most popular song “Timilai dekhera [upon seeing you]” at her hospital bed.

He also posted a video saying, “Dear Muskan, You are strong and brave...a survivor.True beauty has nothing to do with face, its how good we are as a human...”

Miss Nepal International 2017, Niti Shah, has likewise been trying to help Muskan. On Thursday, she wrote on Instagram, “I'm trying to raise funds for Muskan. All the funds collected will be deposited in her mother's account”.

Meanwhile, the government has decided to provide Rs 200,000 each to Muskan and  Jenny Khadka, another acid attack victim. According to Minister for Communication and Information Technology Gokul Banskota, a recent cabinet meeting took a decision to this effect.

The story appeared under the headline "Warm words from show biz celebs light up face of acid attack victim" on Sept 27, 2019.

How hydro companies are cheating shareholders
14 hours ago