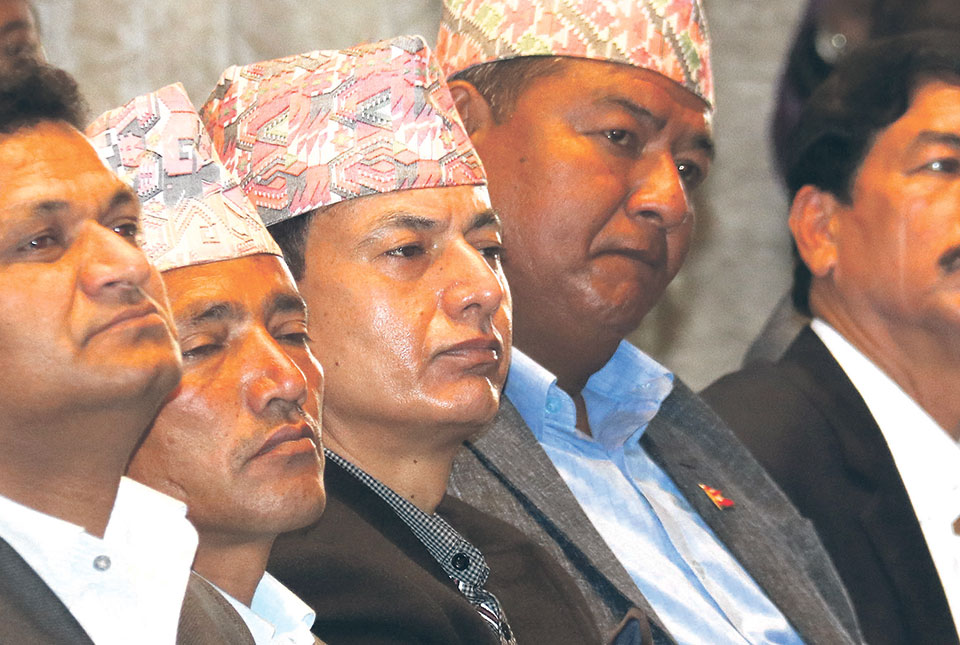 KATHMANDU, Mar 4: CPN-UML lawmaker and former Deputy Inspector General (DIG) of Nepal Police, Nawaraj Silwal, who had been hiding for the past several months to avoid arrest over alleged forgery, has started appearing in public with the change of guards at Singha Durbar.

Silwal, who was elected a member to the federal parliament from Lalitpur-1, was spotted at an orientation program organized by the left alliance for its parliamentarians at the parliament building on Saturday.

It is the second public function attended by Silwal since the formation of the new government. Silwal was first spotted in public at a gathering organized by PM KP Oli at Baluwatar two weeks ago.

Despite a heavy presence of security personnel, Silwal, who is wanted by Nepal Police on the charge of forgery, was not arrested on both occasions. Police said that Silwal, who was the senior-most among the four contenders for the post of chief of Nepal Police, had forged Nepal Police's work appraisal report so as to ensure his appointment.
The indifference shown by police in arresting Silwal has been watched meaningfully because Nepal Police had tried its best to arrest him while Sher Bahadur Deuba was in power.

After repeated failures to arrest Silwal, Nepal Police had also asked the Interpol to help arrest him. Silwal, who has refuted all charges, had accused the Dueba government of launching a "witch-hunt" against him. He has long described the charges against him as an act of vengeance.

Police's apathy to arrest Silwal was perhaps expected because PM Oli has stood by Silwal's side since the appointment of IGP of Nepal police was marred by a row over forgery. It has been understood that PM Oli, after assuming power, had categorically directed the Nepal Police chief not to purse the case against Silwal. Left leaders said that Silwal will take the oath of office soon.

Linking it with the surrender to the police by another lawmaker Resham Chadhary, social media users have criticized the government for treating Silwal differently even as both face serious charges.

A lawmaker elected from Kailali district, Chaudhary, who has been described as the mastermind behind the lynching of seven police officials in Tikapur in 2015, was arrested while appearing before the court. Chaudhary has also refuted the charges against him.
Chaudhary's party, the Rastriya Janata Party Nepal (RJPN), has demanded the immediate release of their leader.

"He should be released without any preconditions and all charges against those arrested in connection with the Kailali incident should be withdrawn. Or else, we will be forced to start a new struggle," said RJPN leader Rajendra Mahato.