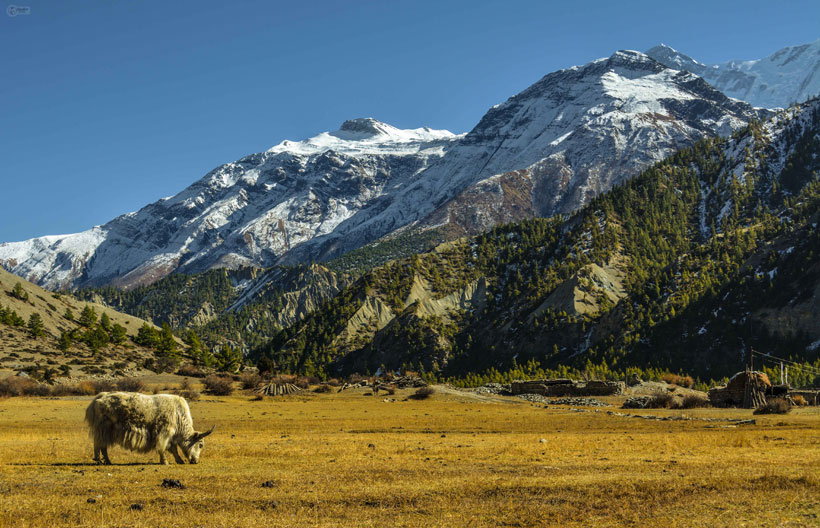 Of difficult hikes and spontaneous detours along the way

Leaving our warm blankets, we had a cup of tea before leaving from Pisang. After walking for just a few hours, enjoying the view of grassfields, snow capped mountains on one side and rocky mountains on the other, we reached Humde. We bought some apples for five rupees. Humde has an airport but reaching here on foot is an experience you shouldn’t miss out on.

As we left the green forest behind us, the altitude rose gradually. With fir trees long gone, there were bushes to replace them. The landscape changed as we moved away from Humde. We could see more Tibetan monasteries, spinning wheels and prayer flags. Kids would either come up smiling and wave at us as we passed by. With the presence of mountains high and low, Yaks grazing in the grassy pastures by the trail, we enjoyed the trek immensely. We reached Brakha walking along a trail beside a river.

We decided to rest at Brakha for the day, as recommended by one of the fellow travelers we met while walking along the trail. Following his suggestion, we also decided to go see the Ice Lake that was off the trail. So we checked into a hotel, left our backpacks there, got the camera and left for Gangapurna lake in Manang first. We reached Gangapurna lake lying in the laps of Gangapurna peak in 30 minutes. Breathtaking blue water, whistling rivers, winds flirting with the prayer flags, and the setting sun, it was peace like we had never felt before.

I was amazed to see a beach football ground up there. I decided to walk up to the top of the hill in order to capture the whole of Gangapurna lake and the peak in one frame. I somehow managed to get to the top crossing fences, while walking along rocky patches and slippery gravel. I was so focused on not falling down the trail that I don’t remember how I actually got down. By the time we had finished exploring Gangapurna, the sun had long set and we headed back to the hotel.

It is recommended that after 3000 meters, you should ascend no more than 350 meters a day to prevent AMS (Acute Mountain Sickness). But we were heading towards Ice Lake which was at an attitude of 1000m above us. Our journey up without a backpack was easy at first. When the mountains came so close that it felt like we could touch it by extending our arms, we were confronted with a loud crashing sound. It was an avalanche in one of the Annapurna peaks. In fact, we witnessed three avalanches that day, giving us the opportunity to re-tell interesting stories after our trip.

As we gained altitude, we slowly paced ourselves. There were not many teahouses in between but still we stopped time and again, caught our breath and grabbed a bite of some chocolate before we proceeded to move up. Every time we thought we had reached a mountain top and we would finally get to see that lake, we ended up being wrong and there was always another one to trek over. Every once in a while we felt like giving up but we persevered and finally reached Ice Lake.

And it was worth it. Two lakes, frozen, at an altitude of 4600m, monuments and mountains guarding the lakes, it was a sight to behold. We ate a cinnamon roll each to celebrate (it is now my favorite bakery item). After spending half an hour around the lake, it was time to go back to Brakha. Unfortunately, there were no teahouses to stop by near the lake either. The trail which took five hours to complete, only took two hours during the return trip.

The alarm went off at 4:30 am. We got up feeling groggy and tired, every muscle in our bodies aching... Read More...

Wanderlust in Annapurna : And the journey continues

After a trip to the Ice Lake, we headed back to our hotels. We had decided to rest for a... Read More...

It had only been a few weeks since I got back from the Mardi Base Camp trail. The phone rang... Read More...

Bodies float down Ganges as nearly 4,000 more die of COVID in India
11 hours ago