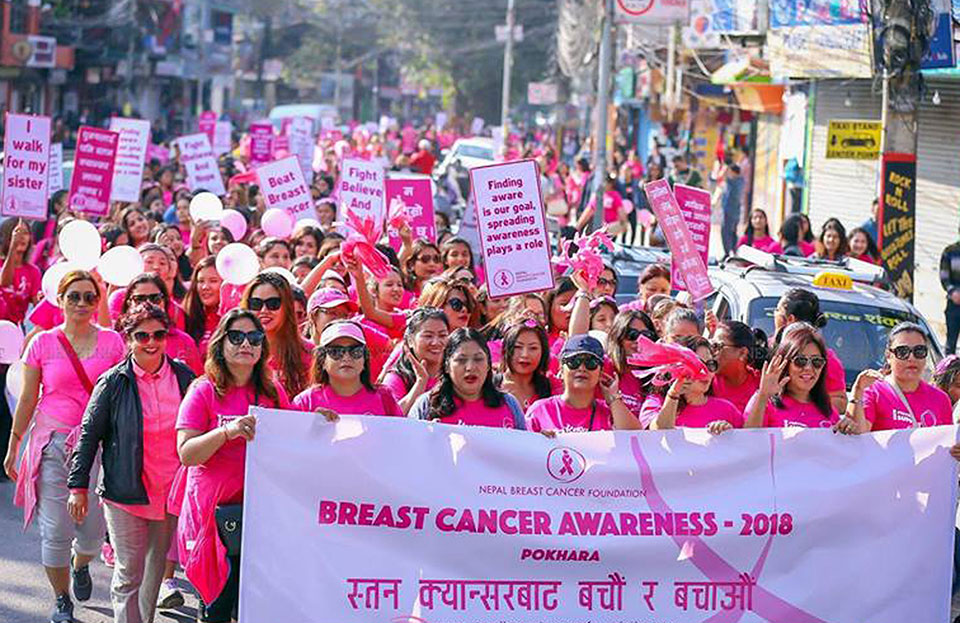 The Walk centered in Lakeside was followed by Open Zumba session and awareness programme.

The participants of the event carried placards and banners supporting breast cancer awareness messages. A medical team was there to provide counseling about the disease to public.

This is the second time that the Walk was held in Pokhara. It was supported by local social organizations and health institutions as in the last year. According to Foundation's President Suzita Hirachan, the objective of the programme is to build an atmosphere so that people could talk about more and more about breast cancer; become aware of it and support the patients with their every step. "Besides, we want women talk openly about their health issues and take preventive measures."

Breast cancer is the second most common form of cancer among the Nepali women after cervical cancer.

Regular health camps about breast cancer, counseling and distribution of drugs in various parts of the Kaski district are in the organiations's calendar.

According to American Cancer Society, women above 45 years of age should undergo screening for breast cancer once a year by mammography as survival rate is more than 90 percent in the case of timely diagnosis of the disease and availability of treatment in early stage.

Japanese cancer specialists and breast cancer surgeon Dr Utsab Man Shrestha from Kathmandu also had been in Pokhara to join the Walk.