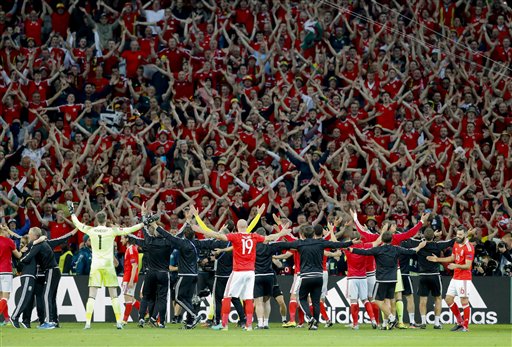 LILLE, July 2:  On the greatest night in its soccer history, Wales swept past the world's No. 2-ranked team at the European Championship on Friday.

Wales stormed back from a rough start to beat Belgium 3-1 in a pulsating quarterfinal won by classy goals from two unheralded forwards.

As usual, Gareth Bale was excellent and, of course, all the talk will be of him and Portugal's Cristiano Ronaldo before the two teams meet in a semifinal next week.

Still, unlike Portugal, Wales and Bale have been wonderful and a truly refreshing surprise in reaching a first semifinal at a major tournament.

"We are so excited to be here. We have never been at this level," said Wales coach Chris Coleman, who took over a team ranked outside the top 100 four years ago. "You dream about nights like this. You're never sure if you're lucky enough to experience it and when you're involved, you can't describe it."

After 25 minutes on Friday, the dream seemed far away against a fast-starting Belgium side that was playing almost a home game just 10 kilometers from its border.

The ferocity of Belgium's opening goal in the 13th-minute, a rifled shot by midfielder Radja Nainggolan rising into the net from 25 meters, did not bode well.

But Wales captain Ashley Williams hauled his team back into the fight in the 30th when he stooped to head in a corner.

Then, two forwards from second-tier clubs in England, Hal Robson-Kanu and Sam Vokes settled the game with goals in the 55th and 85th minutes. In Robson-Kanu's career-best moment, he deceived three defenders with a 'Cruyff turn'.

The big forward shaped as if to shoot, then suddenly dragged the ball back and swiveled into clear space, freeing him to place a shot past Belgium goalkeeper Thibaut Courtois.

"It's instincts," said Robson-Kanu, who is a free agent after letting his contract with English second-tier club Reading expire. "That was the best option to create the space and fortunately I am then in on goal. It's a good feeling."

Vokes came on as a substitute to meet Chris Gunter's cross with a glancing header and spark wild celebrations in the Welsh corner of a stadium packed with Belgium fans among the crowd of nearly 46,000 people.

"It was like playing in Brussels tonight," said Coleman, who also led his side to an upset win over Belgium in their qualifying group last year.

As the stadium emptied, Wales players and fans paid tribute to Iceland by copying the celebration ritual of the other feel-good story of an overachieving small nation at Euro 2016.

Bale and his teammates raised their arms and clapped slowly, exchanging salutes with thousands of fans that built to a crescendo.

By conceding Rainggolan's spectacular strike, Wales failed to open the scoring for the first time in five games at Euro 2016.

Belgium had its chances, and forward Romelu Lukaku missed badly from close range when his team made fast starts in each half.

"For the first 20, 25 minutes we dominated Wales," Belgium coach Marc Wilmots said. "But then we dropped back and I can't explain why."

Belgium had no fewer than four clear opportunities in a hectic seventh minute. Rapid-fire shots from Yannick Carrasco, Thomas Meunier and Eden Hazard were saved, blocked and deflected for a corner. When that was crossed in, Lukaku missed the ball from close range with the goal unguarded.

Belgium's early fast breaks stretched the Wales defenders, who collected three yellow cards before momentum shifted in the 26th. After Aaron Ramsey got behind the Belgium back line, Courtois was forced into a diving save from Neil Taylor's sharp shot.

Soon after Williams scored, he exploited more poor marking to connect for another header that flew too high. A mostly untested Belgian defense, which did not concede a goal in its three previous games, suffered without the injured Jan Vertonghen and Thomas Vermaelen, who was suspended.

Belgium is also missing its captain and first-choice central defender Vincent Kompany at the tournament.

Suspensions will now take a toll on Wales. The tireless and influential Ramsey plus defender Ben Davies were shown yellow cards Friday and will miss the semifinal.

That game against Ronaldo's Portugal will be the biggest in Welsh history. Just like the challenge to overcome Belgium.

BELGIUM, Sept 4: Belgians are famous for taking their beer seriously, but authorities are now moving to preserve some of... Read More...