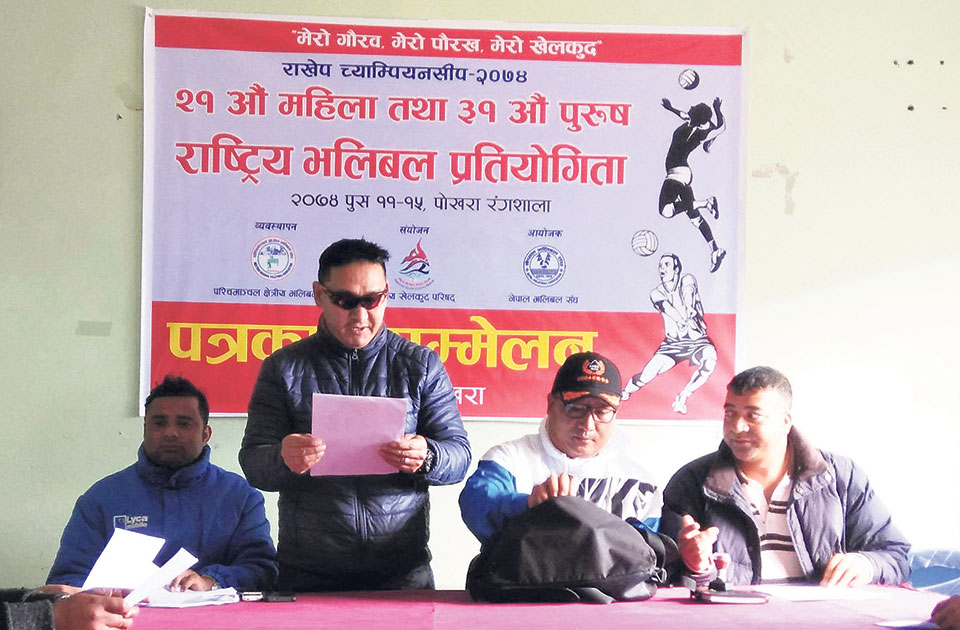 The competition to be held under the management of Western Region Volleyball Association will feature a total of eight teams including five regional and three departmental teams.

Men’s and women’s teams from eastern, central, western, mid-western and far-western regions along with Tribhuvan Army Club (TAC), Nepal Police Club (NPC), and Armed Police Force (APF) will be competing in the tournament. The top three teams in both men’s and women’s categories will be rewarded with Rs 50,000, Rs 30,000 and Rs 20,000 respectively.  Beside the cash prizes for the winning teams, the organizer will also give individual cash prizes to the best players in different categories.

According to the tournament coordinator Raj Kumar Gurung, the competition will also help in selection of players for the national team for upcoming Asian Games and South Asian Games (SAG).
Nepal Volleyball Association (NVA)’s Vice-president Yam Gurung informed that 12-12 players in men’s and women’s categories from each team will be selected for the national training camp.
On the opening day of the tournament, departmental teams TAC and APF will face men’s and women’s teams from the eastern regions, respectively.

“Volleyball is as famous as football in Pokhara. This city has produced top talents for both men’s and women’s national teams. We are hopeful of this tournament drawing high number of spectators to the stadium, including foreigners,” said NVA’s secretary DB Nepali.

BAGLUNG, Oct 8: Preparations for the 22nd National Women's Volleyball Tournament slated tomorrow (October 9) in the district are all... Read More...