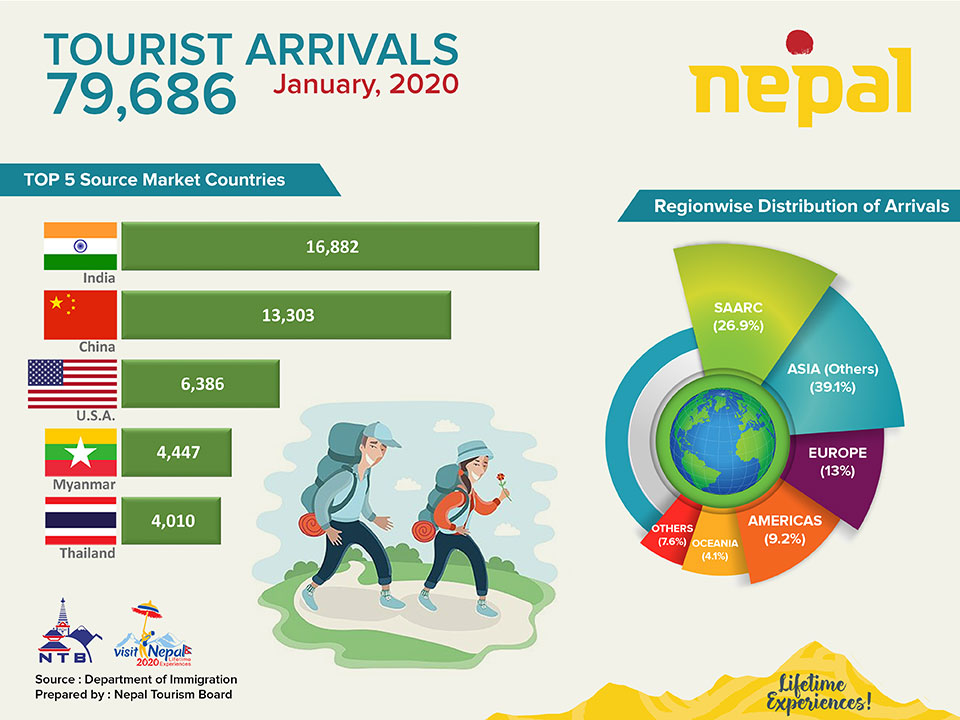 KATHMANDU, Feb 12: Tourist arrivals into the country fell by 2% in the first month of 2020 which is being celebrated as Visit Nepal Year 2020 campaign.

The government inaugurated the campaign amid much fanfare across the country on January 1.

According to data released by Nepal Tourism Board (NTB), a total of 79,686 tourists entered the country in January, down from 81,273 in the corresponding period last year. "Of the total tourists, 65,983 flew into the country whereas remaining 13,703 entered the country through land routes," NTB said in a statement.

Kakarbhitta, Birgunj, Bhairahawa, Banke, Dhanghadi, Kanchanpur and Rasuwa are the port of entries for visitors entering Nepal via land route.

The outlook for February is also not satisfactory, according to immigration officials. "The number is declining in this month as well. The drop could be even harsh in the second month," Ram Chandra Regmi, an information officer at the Department of Immigration, said. “The arrival graph is going down mainly due to drop in tourist numbers from China," he added.

Dhananjay Regmi, CEO at NTB, said tourism is at the receiving end of coronavirus outbreak in China. Not only has Chinese tourists been affected, the fear of coronavirus has taken over its effect on tourists from India and Europe as well, he added.

Meanwhile, the government has started looking for alternative market to fill the gap created by drop in arrivals from China – the second largest source market for Nepal. “We have submitted a report on potential alternative market,” Regmi told Republica. “We are continuously launching promotional events and products in countries including Japan, South Korea, and Sri Lanka, among others, as well as in the Middle East."

The coronavirus outbreak in Hubei province of China has directly impacted the tourism industry of Nepal. Many Chinese have cancelled their trips to the country. To counter the loss, the government has said that it is planning to aggressively promote the campaign in the markets of South Asia and Arabian country. “Though we might face problems in the first few months, we are confident enough to get out target met by the end of the year,” Regmi said, adding: “As our marketing plan has been executed well in other markets, we might double the number of tourists from those destinations. We are positive about meeting the target.”

India, China, the US, Myanmar and Thailand were the top five markets for Nepal in the review month. Nepal received 16,882 and 13,303 visitors from India and China, respectively, while it welcomed 6,386 visitors from the US, 4,447 from Myanmar and 4,010 from Thailand.

KATHMANDU, Mar 2: The government has directed the bodies and organizations under the Ministry of Culture, Tourism and Civil Aviation... Read More...