KATHMANDU, Dec 6: They would wake up before sunrise, and reach their destination early. After short interactions with locals, they would decide whether to give a concert or just quit, and move a little further in the neighborhood. Many people would shower love and affection, and a few would even harass them. An entire day's hard work meant enough money for meals for that day, and a sound sleep. They would even save a bit. And the same routine repeated, day after day. Life was hard, but it was beautiful.

A team of four visually impaired street singers from Kathmandu – Samikshya BK, Devaki Chaudhari, Sudip Oli and Min Bahadur Tamang– were busy with their life until the pandemic hit. They would perform in the streets, lanes and alleys in Kathmandu, Lalitpur and Bhaktapur; one neighborhood at a time, to make a living. The singers lost their job after the government imposed a nationwide lockdown in March. They are desperate, and nobody is concerned about the singers.

"It has been four months, and I have not paid my rent. Managing food is hard. Earlier, the government had provided some relief, and organizations and individuals came to help," Samikshya, 25, said.

Samikshya is from Banke district, and she 'cannot go back to her village'. She had left home after SLC 'to prove herself'. There were heated arguments. "I did not go home even during Dashain. I should not be a burden to my family," she added.

Other friends in her group also have reasons for staying back in Kathmandu. For most of them, 'the hurts are never healed when your own parents or family members treat you poorly or mock your physical disabilities.' 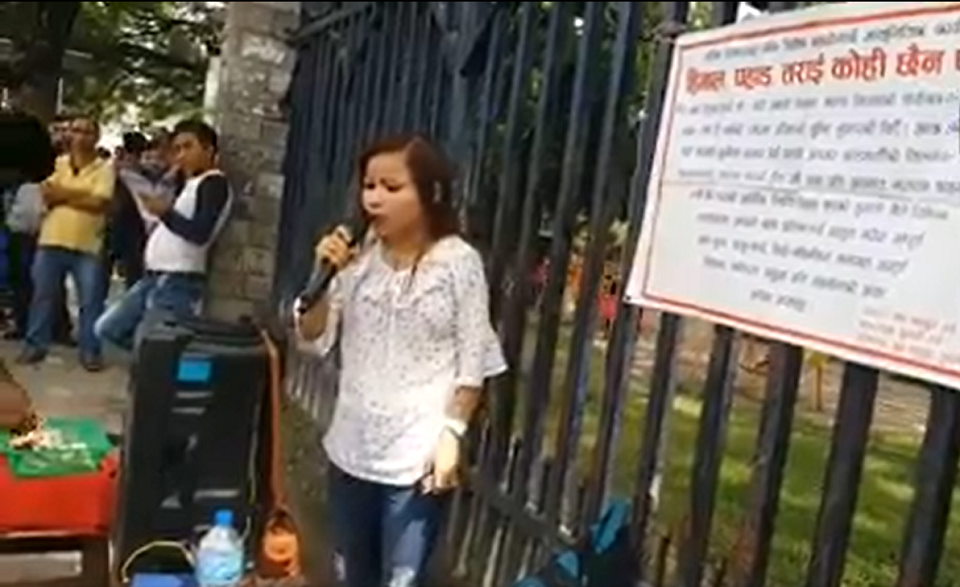 According to Sita Subedi, president of Blind Woman Association Nepal, a majority of visually impaired people in Kathmandu and outside are street singers. It is hard for them to take other jobs, and that is why many of them try their luck in singing.

"We can't pinpoint when this trend started in Nepal, but it must have been around ten years ago," Sita said. "Hundreds of singers have become jobless now, and they do not have any other support in life."

Sujata Rai sings 'Saal ko paat tapari hune hey barai nahune sallaiko' (most viewed Nepali folk song of 2018, with 60 million views on YouTube) quite effortlessly. The 31-year-old visually impaired woman has not been able to sing in the public for eight months now. When she tried singing for Republica over the phone on Saturday evening, she was rather shy. When she sang, her voice and rhythm were flawless.

"I used to sing in Sundhara. People would request that I sing the popular song. But who would listen to my singing now, and I don't know when we can sing again!" said Sujata. "People would enjoy and give money. Some bad people, drunkards would steal money from my bowl. I used to make 200 to 300 rupees or even more per day," she added.

Sujata, who lives in Kapan, is visually impaired by birth. She has no sense of color or images. Her husband, who lost his eyesight at a young age, is also a singer. He was employed at a restaurant. Thanks to COVID-19, both of them are jobless.

"We lost our  source of income. We have to pay 3500 rupees per month for our room. We have a son to raise; his school asks for fees. I have no idea what we are going to do,” she laments.

Subedi says that there must be around 1000 visually impaired singers across the country. Most of them are street singers, and some work at 'dohori restaurants'. As per the 2011 census, 1.94 percent of the population (513,321 people) have some form of disabilities. However, this number has since been challenged by organizations of disabled people.

"We don't have the exact number of the people with different kinds of disabilities and their severity. But the pandemic has hit us the most," she remarked.

A rapid assessment report by the National Federation of the Disabled – Nepal (NFDN) published in June reported that 42 percent of people with disabilities have lost their source of income due to the pandemic.

Visually impaired couple begging in streets after being expelled from home

TIKAPUR, April 17: After being abandoned by their sons, a visually impaired couple in Janakpur have been forced to beg for... Read More...