KATHMANDU, March 19: “It is not the mountain we conquer but ourselves.” The famous quote by Sir Edmund Hillary after the first successful ascent to Mt Sagarmatha along with Tenzin Norgay Sherpa has driven many mountaineers to set out on a conquest to reach the top of the world. As Set Godin has put it “Everybody has their own Mt Sagarmatha they were put on this earth to climb.”

Amit KC, a Nepali climber who is visually impaired, has set his vision on conquering Sagarmatha and is ready for a second push for the mountain this spring climbing season. In his first attempt at the mountain, KC was forced to deal with unfavorable conditions which delayed his summit push even after reaching South Col.  KC embarked on his mission to reach the summit of Sagarmatha eight years ago after quitting his job as a teacher at a government school.

Hailing from a hilly district in western Nepal, KC had never experienced the touch of snow except for that one time when he encountered a light snowfall over a decade ago. KC comes from Jaimini Municipality-4, Baglung district, and had never been to the mountains before he set out on his mission. From never having been in mountains to on a mission to scale Mt Sagarmatha, the highest mountain in the world, KC is ready for a second push to the summit with the person he trusts and respects the most, himself.

In an exchange with Republica, KC recalls a time when an American national provided him with rock climbing training. “During the training, I asked him if I would be able to summit Mt Sagarmatha.” The American’s response was what inspired KC to climb Sagarmatha. “He laughed at my question and said your question is like a fish asking if it can swim in a pond. I was told that a Nepali despite visual impairment or any kind of disability can definitely summit Mt Sagarmatha because it’s a self-motivated factor,” he said.

Despite having the willpower to summit Mt Sagarmatha, the responses he got from people did not match as they treated him as if he had taken up an impossible venture. However, he was confident that with the help of Sherpas, he would be able to reach the top of the world. With a sheer determination to not flinch away from his quest over the years, KC says the perception of people regarding his decision to climb Sagarmatha has changed over the years.

Given the risks mountaineering carries, KC, a husband and a father of two had difficulties convincing his families and friends about his decision to take on the challenge in the beginning, but eventually, with each achievement and his can-do attitude, they have turned into his supporters.

In his quest for making what people said was ‘impossible’ possible, KC has scaled three six-thousanders,  Island Peak (6,160 m), Mera Peak (6,476 m), and Lobuche Peak (6,119 m). KC attempted to summit Mt Sagarmatha (8,848.86 m) in 2017. “When I reached the South Col, I stayed there for about 36 hours due to bad weather,” he says. KC had to return from South Col while attempting to summit Mt Sagarmatha because of a shortage of oxygen canisters. 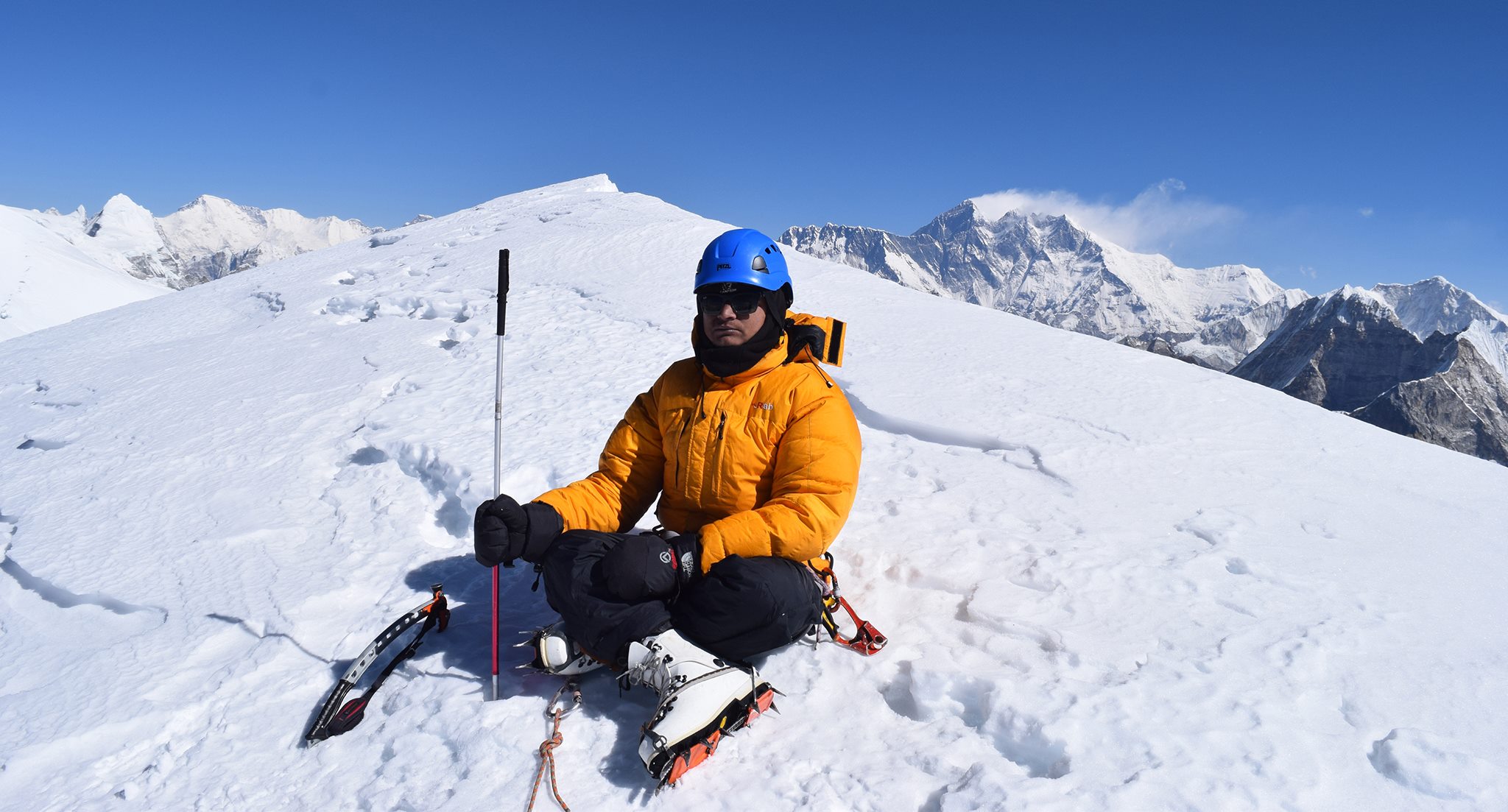 Earlier, the government of Nepal had banned people with disabilities from climbing mountains including Sagarmatha in December 2017. “Madhav Chamlagain, a central member of the Federation of Nepali Journalists (FNJ), and I filed a writ petition in the Constitutional bench of the Supreme Court seeking a mandamus saying that the act was against all national and international laws signed by the Government of Nepal on disability, including the United Nations Convention on the Rights of Persons with Disabilities (UNCRPD).”

The Supreme Court later overturned the government’s decision to ban differently-able people from participating in mountaineering activities in June 2018.

His expedition could not be continued in 2018 and 2019 as he spent his time advocating for persons with disabilities at the Supreme Court.

KC who is also the first differently-abled general member of Nepal Mountaineering Association (NMA) believes that if you create the opportunity yourself, everything is possible.

Over the past eight years, he has faced more social and financial challenges rather than geographical challenges. Before stepping on the mountain, I made up my mind that I might lose my life in the course and I have made peace with it.

KC does not feel the need to answer people who are there to demotivate him from reaching his goal. He complains that he has not received any kind of support from organizations related to differently-abled people. “I have been appealing to all to support me in this campaign. I will be heading to the top with a team of four people,” he states.

He defines Mt Sagarmatha as a symbol of pride and independence and a natural security barrier for his motherland. He will be leaving for the Sagarmatha region for his second summit attempt to Sagarmatha on April 3 and plans to finish the mission by June 10. He will become the first visually impaired Nepali national to scale Sagarmatha if he successfully completes his mission.

KATHMANDU, Jan 3: Nepali team left for Pakistan on Tuesday to participate in the fifth edition of ODI World Cup of... Read More...