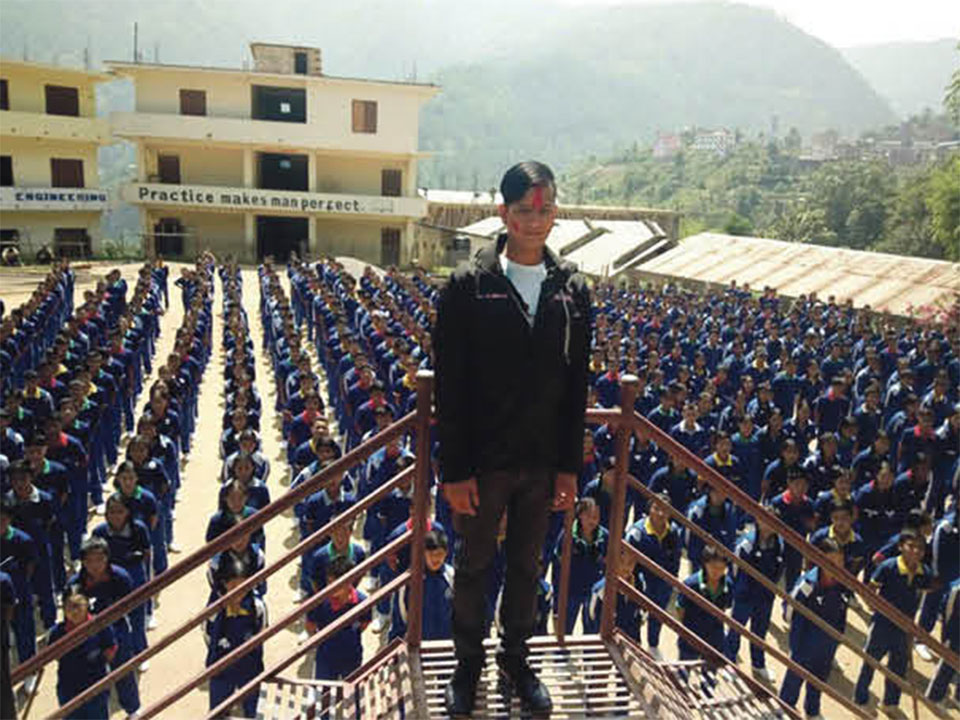 ROLPA, June 29: A visually-impaired student, Lokesh Dangi of Balkalyan Secondary School at Liwang, Rolpa, has topped the SEE (Secondary Education Examination) in the district. With a GPA of 3.55, Dangi has scored the highest from the community schools running in the district. Along with Dangi, his elder brother Shishir Dangi has also scored a GPA of 3.5.

Out of the four children of their parents, both Lokesh and Shishir were born with impaired vision. They initially studied at Tara Secondary School till grade 6 and completed their further studies at Balkalyan. Studying with other peers, who did not share a similar fate, was a challenge but they tackled the hurdles in every phase. “I realized it was possible to excel in the school course that we studied at the school. For now, I am in need of professional guidance so that I can opt for the right subject,” said Lokesh.

“I am looking forward to attending high school at Balkalyan and aspire to contribute my knowledge and learnt skills to the teaching field in the future,” added Lokesh.Lokesh further mentions his inconvenience in using the Braille script for studying. “Since geometrical figures are quite complex to draw, I believe there should be some alternative for students who are visually-impaired,” added Lokesh.

As any of the geometrical figures are not included in the Braille script, he further pledges the government to find some alternatives in order to make the environment conducive for them to go for higher studies. “I wonder what the human heart and kidneys that we study about in the books actually look like. It would have strengthened our area of knowledge if we could be able to imagine them through using out tactile senses,” added Lokesh.

It is a matter of pride that Lokesh Dangi has secured the highest marks in the entire district. The school is planning to provide scholarships for both the brothers who have achieved the best despite many challenges,” said Principal Madhusudan Pokharel. “Since all course books for higher studies are not available in the Braille script, we are planning to arrange cassettes and CDs for them,” added Pokharel.

SEE exams to be held as scheduled from  Thursday

KATHMANDU, March 18: The government has clarified that the Secondary Education Examination (SEE) will be held as per the original... Read More...

BHAKTAPURr, Nov 29: The National Examination Board is set to conduct this year's Secondary Education Examination (SEE) from Chaitra 10... Read More...