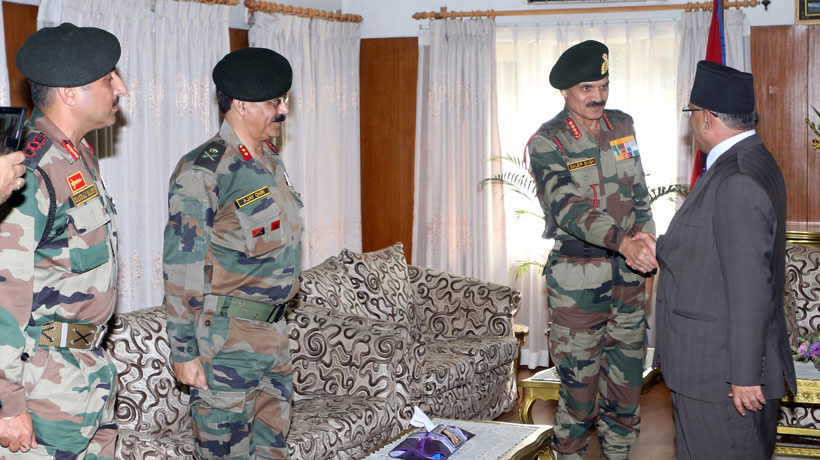 Indian Army Chief Suhag arrived in Nepal on Friday for a three-day official visit at the invitation of the Nepal's Chief of Army Staff Rajendra Chettri.

During today's meeting, PM Dahal told the Indian Army Chief that his recent visit to India during BRICS-BIMSTEC meet and Indian President Pranab Mukherjee's subsequent visit to Nepal had helped further strengthen the ties between Nepal and India, PM's Secretariat quoted the PM as saying.

PM Dahal also said that Nepal was now heading towards the path of prosperity carrying along the undertakings as the implementation of new constitution, post-quake reconstruction drive and concluding the peace process.

On the occasion, Indian Army Chief Suhag spoke of the need to further consolidate the centuries-old Indo-Nepal relations.

He also informed PM Dahal that a new office was in the offing at Butwal to facilitate pension distribution to those Nepali army personnel retiring from the Indian Army. RSS

NGO operators in Kathmandu deny embezzlement of UK donation meant for treatment of street dogs, claim that they are not local board of KAT UK
18 hours ago

20 killed in floods, landslides in past nine days, 3,258 people displaced
22 hours ago

16 DIGs including all provincial police chiefs transferred
7 hours ago