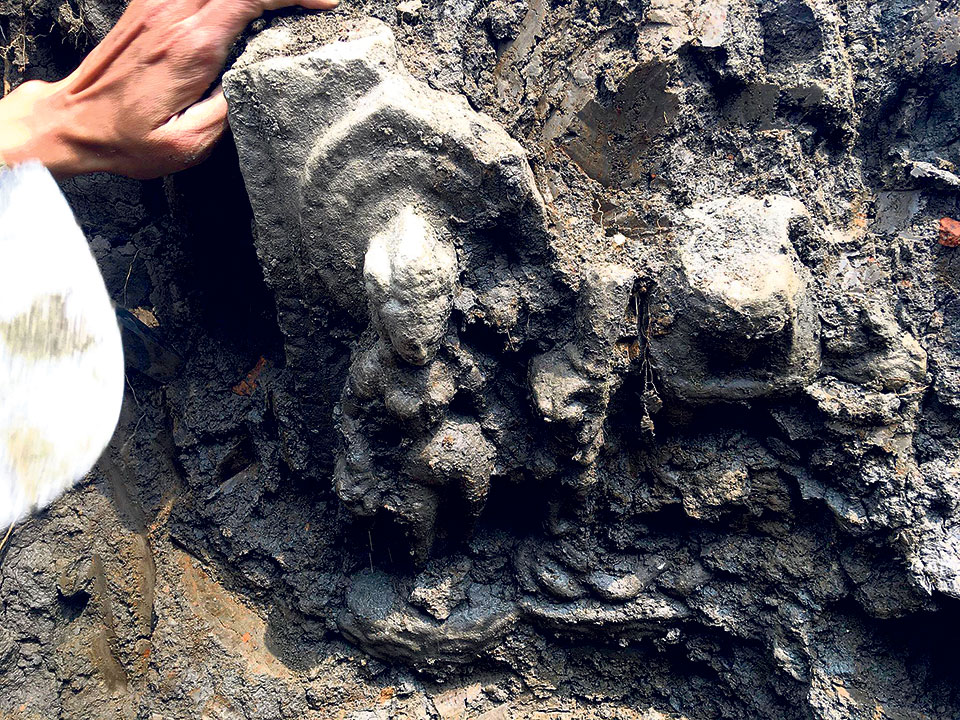 A Vishnu-Laxmi statue, which could be from the Lichchhavi era (400-750 AD), was unearthed in Kirtipur on Saturday. The Department of Archeology is currently working to determine the age of the statue. Photo: Republica

KATHMANDU, April 1: In the process of rebuilding an earthquake-hit temple on the outskirts of Kathmandu on Saturday, locals dug up what is believed to be a Lichchhavi-era stone statue of Hindu god Vishnu and his consort Laxmi.  The locals of Kiritpur Municipality-6, Charghare, which is about 9 kilometers from the capital, were surprised when they found the ancient looking statue while carrying out the reconstruction work at the Jalapadevi temple on Saturday.

The Lichchhavi era is often considered the golden era in Nepali history when art, culture and architecture flourished at its best. However, very few structures built in the era, dating between 400 and 750 AD, still stand today.

Initially, the locals were surprised after discovering the ancient looking statue a couple of feet under the ground on the temple premises. They had no idea how to respond to the discovery. It was only after a local, Binod Basnet, uploaded photos of the find on Facebook which garnered much attention, that the Department of Archeology (DoA) learnt about the statue.

On Sunday, a team from the DoA visited the temple to ascertain whether the statue was from the Lichchhavi era. The team has yet to submit its official report to the DoA.

He added that the team of officials has already returned from the inspection and will submit report on Monday.

He added that the DoA has directed the officials to request the locals to keep the statue safe. “If it is proven to be a Lichchhavi-era statue, then it will be an important archeological find of recent times.”

Work halted due to lack of construction materials, increasing Nepal’s financial liability by Rs 15 million a day
31 minutes ago