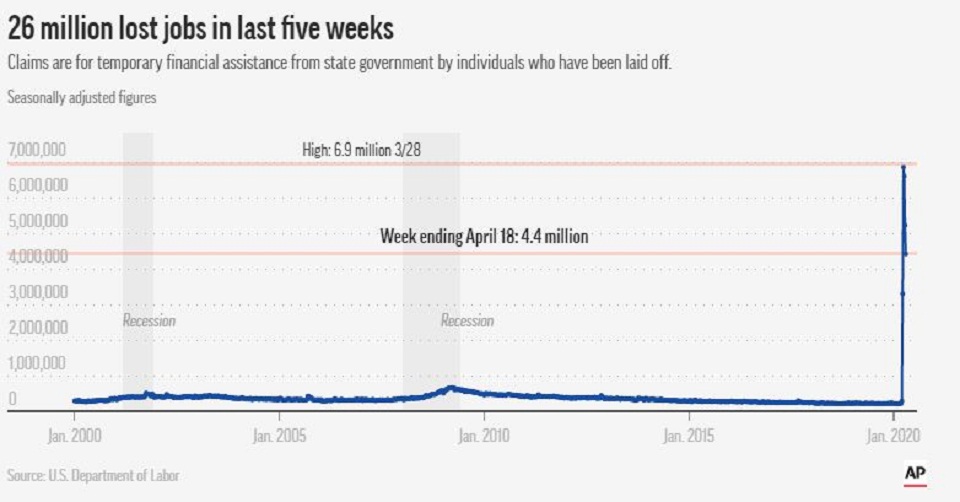 NEW YORK, April 24: Unemployment in the U.S. is swelling to levels last seen during the Great Depression of the 1930s, with 1 in 6 American workers thrown out of a job by the coronavirus, according to new data released Thursday. In response to the deepening economic crisis, the House passed a nearly $500 billion spending package to help buckled businesses and hospitals.

More than 4.4 million laid-off Americans applied for unemployment benefits last week, the government reported. In all, roughly 26 million people — the population of the 10 biggest U.S. cities combined — have now filed for jobless aid in five weeks, an epic collapse that has raised the stakes in the debate over how and when to ease the shutdowns of factories and other businesses.

In the hardest-hit corner of the U.S., evidence emerged that perhaps 2.7 million New York state residents have been infected by the virus — 10 times the number confirmed by lab tests.

A small, preliminary statewide survey of around 3,000 people found that nearly 14% had antibodies showing they had been infected, Gov. Andrew Cuomo said. Just in New York City, with a population of 8.6 million, Health Commissioner Oxiris Barbot said as many as 1 million may have been infected.

In Washington, many House lawmakers wore face masks and bandannas — and some sat in the otherwise vacant visitors gallery to stay away from others — as they debated the latest spending package. A near-unanimous vote sent it to President Donald Trump in the evening.

Anchoring the bill is the administration’s $250 billion request to replenish a fund to help small- and medium-size businesses with payroll, rent and other expenses. Trump said the bill “will help small businesses to keep millions of workers on the payroll.”

Govt has to promote full digitisation to save country from economic impacts of lockdown: Experts

KATHMANDU, May 23: Experts have urged the government to ensure a digital ecosystem and related security system providing access to... Read More...

Locked-down Indian economy in its worst quarter since mid-1990s

BENGALURU, April 23: The Indian economy is likely to suffer its worst quarter since the mid-1990s, hit by the ongoing lockdown... Read More...