Virus exposes US inequality. Will it spur lasting remedies? 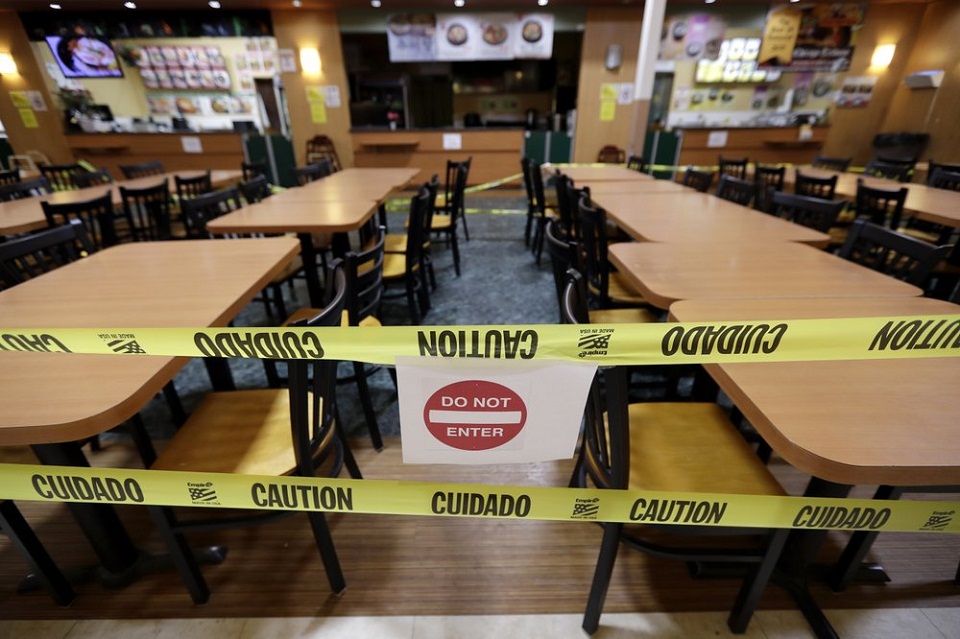 FILE - In this April 3, 2020, file photo, the seating area is closed-off at a food court in Assi Plaza during the coronavirus outbreak in Niles, Ill. For years, financial inequality has widened in the United States and elsewhere as wealth and income have become increasingly concentrated among the most affluent while millions struggle to get by. Now, the coronavirus outbreak has laid bare the human cost of that inequality, making it more visible and potentially worse. (AP Photo/Nam Y. Huh, File)

WASHINGTON, April 14: The sick who still go to work because they have no paid leave. Families who face ruin from even a temporary layoff. Front-line workers risking infection as they drive buses, bag takeout meals and mop hospital floors.

For years, financial inequality has widened in the United States and elsewhere as wealth and income have become increasingly concentrated among the most affluent while millions struggle to get by. Now, the coronavirus outbreak has laid bare the human cost of that inequality, making it more visible and potentially worse.

Congress, the Trump administration and the Federal Reserve have mounted the largest financial intervention in history — a full-scale drive that includes mandating sick leave for some, distributing $1,200 checks to individuals, allocating rescue aid to employers and expanding unemployment benefits to try to help America survive the crisis.

Yet those measures are only temporary. And for millions of newly unemployed, they may not be enough.

The disaster that is igniting what’s likely to be a deep recession also raises the question of what happens once life begins to edge back to normal. Will the U.S. remain an outlier among wealthy countries in providing limited protections for the financially vulnerable? Or will it expand the social safety net, as it did after the Great Depression of the 1930s but largely did not after the Great Recession that ended in 2009?

“Maybe there will be a cultural shift,” said Elise Gould, senior economist at the progressive Economic Policy Institute. “I see it as a great opening to try to (provide) those labor protections that low-wage workers didn’t have before.’’

Gould notes that the government’s suddenly expanded role now in distributing relief checks, expanding health benefits and sick leave and supplementing state unemployment aid would make it easier to extend such programs even after a recession has ended. Doing so could have the longer-term effect of reducing financial inequalities.

Whether the government ends up adopting any long-lasting policy reforms will depend in part on which party controls the White House and Congress beginning in January. In the meantime, the topic is sure to drive much of the campaign rhetoric as the presidential race moves toward the November election.

America’s minimum wages also lag far behind those in most of Europe, though many states have raised their minimums in recent years. In 2018, the Organization for Economic Cooperation and Development concluded that the U.S. national minimum wage paid 33 cents for every $1 earned by workers in the middle of the earnings spectrum. That contrasted with 46 cents in Germany, 54 cents in the United Kingdom and 62 cents in France.

The coronavirus has struck at the most vulnerable. African-Americans account for 42% of the nearly 3,300 COVID-19 deaths that The Associated Press reviewed — twice their share of the population in the areas covered by the analysis. Blacks as a group earn less, endure higher rates of unemployment and have less access to health care than other Americans. They also suffer disproportionately from the underlying conditions that make them more vulnerable to COVID-19: Diabetes, obesity, asthma.

The financial pain, too, has landed hardest on the neediest as the economy locks down to fight the outbreak. The United States last month lost 713,000 private sector jobs. Jobs in leisure and hospitality (mostly restaurants and hotels) accounted for 64% of the losses. And those workers earn an average of just $16.83 an hour, 41% less than the average American.

They are people like Alexi Ajoste, who worked at a Panera Bread shop for three years before being furloughed late last month. Ajoste, a 20-year-old from Tempe, Arizona, has filed for unemployment benefits.

“I have a savings account and have money backed up for emergencies, but it scares me,” Ajoste said. “I don’t know if my savings account is enough for all of this. I feel like the unemployment checks will be enough for the next couple of months....As long as it doesn’t last four or five months, I think I’ll be good.”

Congress’ rescue plans are intended to ease the pain. They require companies with fewer than 500 workers to offer paid sick leave, although employers with fewer than 50 can seek an exemption. The government is sending $1,200 checks to Americans who earn up to $75,000 and smaller checks to many who earn more.

The rescue plan extended unemployment benefits for the first time to part-time and gig workers such as Uber drivers. And it added $600 a week to existing state unemployment payments. But states have been swamped by claims for jobless benefits — nearly 17 million over the past three weeks — and are struggling to deliver the new federal aid.

Shamira Chism, for example, who was laid off from her job as a line cook at a Nashville restaurant three weeks ago, says she’s getting by on state unemployment benefits of $275 a week. But she’s still waiting for Tennessee to upgrade its systems to deliver the additional $600 a week in federally provided benefits.

Throughout U.S. history, economic catastrophes have sometimes led to lasting programs to benefit ordinary people — and sometimes have not. President Franklin D. Roosevelt drove through a series of lasting changes to the economy after the Depression struck, to provide Social Security pensions, for instance, and to make it easier for workers to form unions and bargain for higher wages and better working conditions.

President Barack Obama countered the Great Recession with a stimulus package and pushed through legislation that provided health insurance coverage to millions of Americans. But a backlash by conservative critics, decrying what they called meddlesome and costly government programs, stymied further action. The government ended up doing less to help the economy recover from the Great Recession than it had after previous downturns.

This time, said Alexandra Cawthorne Gaines of the liberal Center for American Progress, “What we want to see are long-term structural changes,” including expanding access to health care. In light of the crisis, she said, there may be more willingness, from Republicans and Democrats alike, to better protect the neediest.

Gould at the Economic Policy Institute said the country needs to strengthen its social safety so the needy aren’t left so vulnerable in the next public health crisis.

“This is not the last time this is going to happen,” she said.

Amid the coronavirus outbreak, B-town celebs on Saturday urged fans to take all the precautionary measures to fight the pandemic. Read More...