Venezuelans again take to streets as death toll jumps to 37 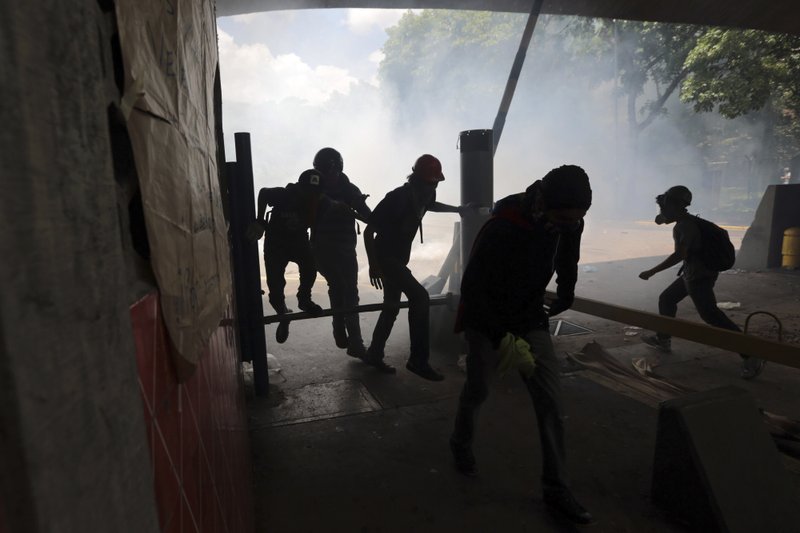 “We are students, not terrorists!” a mass of students chanted as they marched in Caracas.

Soldiers bathed hundreds of protesters in tear gas at the Central University of Venezuela, with medics in gas masks attending to students with bloodied faces and limbs.

“Do you know how many dead there are?” Rafaela Requesens, a student leader, shouted at a wall of National Guard officers standing shoulder-to-shoulder and stopping protesters from advancing. “They are your victims.”

Gunfire erupted at a student gathering in El Tigre, a city southeast of Caracas, leaving Juan Lopez, 33, dead and three others injured, according to the chief prosecutor’s office. Preliminary reports indicate an assailant fired at Lopez toward the end of the meeting and then fled on a motorcycle. Lopez was the president of a university federation.

The student leader’s death brought to at least 37 the number killed in Venezuela’s ongoing political turmoil.

Earlier Thursday, authorities announced a 38-year-old police officer in the central state of Carabobo had died of his injuries after being shot during a Wednesday protest that had hundreds of thousands of people on the street nationwide. Wednesday’s protest also left a 17-year-old student and musician dead.

More than 700 others have been wounded, no small matter in a country with crippling medical shortages. Opposition leaders said 30 were injured in Thursday’s student demonstrations. Overall, more than 1,000 have been arrested.

West of Caracas in Valencia, there were reports of looting at several businesses and at least one factory, the thieves taking off with plastic crates filled with bottles and even a forklift.

Protesters are demanding immediate presidential elections. President Nicolas Maduro accuses the opposition of attempting a coup, and has responded with an initiative to rewrite the constitution.

Walking through an agricultural expo where he pet goats and sampled cheese Thursday, Maduro repeatedly reiterated his call for a special assembly tasked with defining Venezuela’s future. He added that the yet-to-be-created constituent body would decide the South American nation’s destiny “for the next 50 years.”

International pressure on Maduro to hold elections is continuing to escalate amid his call for a constitution rewrite. A group of bipartisan U.S. legislators sent a letter to President Donald Trump Thursday urging him to apply new sanctions against individuals responsible for human rights violations and to push for the delivery of humanitarian relief.

Eight Latin American nations issued a statement decrying the excessive use of force by Venezuelan authorities against protesters, saying such actions only, “polarize Venezuelan society even more.”

And Venezuelan classical music maestro Gustavo Dudamel spoke out against events in his country, calling on Maduro to listen to the protesters.

In an online essay titled “I Raise My Voice,” he urged Maduro to reduce political tensions.

“We must stop ignoring the just cry of the people suffocated by an intolerable crisis,” said Dudamel, who is serving as the Los Angeles Philharmonic’s musical director.

Venezuelans and fellow classical music performers have blasted Dudamel in the past for being cozy with Maduro.

KATHMANDU, March 17: The death toll in Gurjudhara pile-up has reached 2 as one injured passed away while undergoing treatment... Read More...