Venezuela hit with new U.S. sanctions after clashes over food aid on border 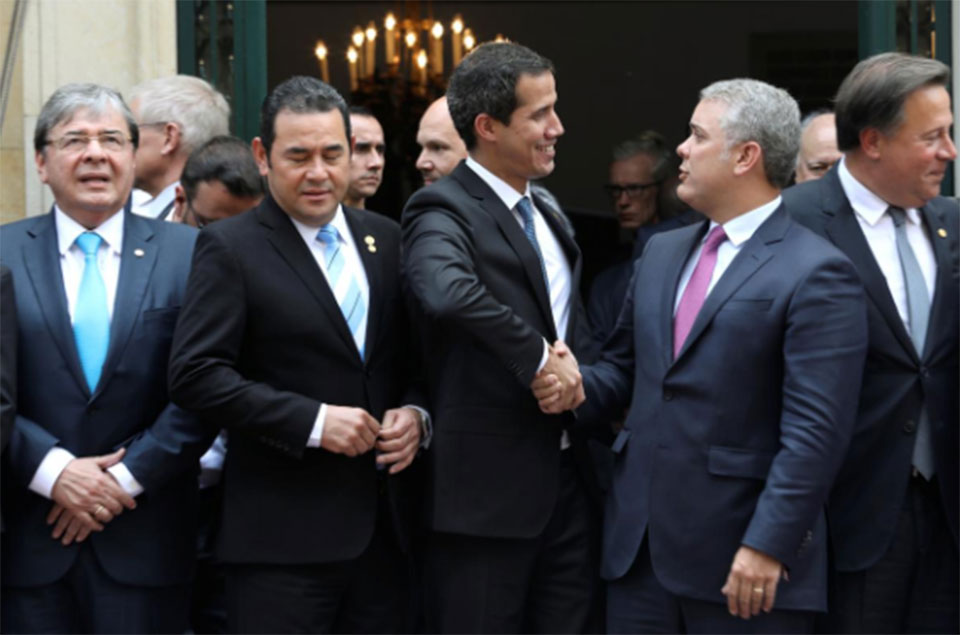 Venezuelan opposition leader Juan Guaido, who many nations have recognized as the country's rightful interim ruler, shakes hands with Colombia's President Ivan Duque, after a meeting of the Lima Group in Bogota, Colombia, February 25, 2019. REUTERS/Luisa Gonzalez

BOGOTA, Feb 26: The United States targeted Venezuela’s government with new sanctions on Monday and called on allies to freeze the assets of its state-owned oil company PDVSA after deadly violence blocked humanitarian aid from reaching the country over the weekend.

As Colombia’s foreign minister warned about “credible threats to the life” of Venezuela’s opposition leader Juan Guaido, the Trump administration also took its pressure campaign to the United Nations Security Council, asking it to discuss the situation in Venezuela, diplomats said.

The U.S. Treasury Department’s sanctions were imposed on four Venezuelan state governors allied with the government of President Nicolas Maduro, blocking any assets they control in the United States.

The new sanctions were announced in Bogota as U.S. Vice President Mike Pence and Guaido met with members of the Lima Group, a bloc of nations from Argentina to Canada dedicated to peaceful resolution of the political and economic crisis in Venezuela.

Pence said the United States would stand by Guaido until freedom was restored. He called for all Lima Group nations to immediately freeze PDVSA’s assets and to transfer ownership of Venezuelan assets in their countries from Maduro’s “henchmen” to Guaido’s government-in-waiting.

He also said tougher measures were coming against the OPEC member.

“In the days ahead ... the United States will announce even stronger sanctions on the regime’s corrupt financial networks,” Pence said. “We will work with all of you to find every last dollar that they stole and work to return it to Venezuela.”

While the day presented a united regional front against Maduro, who is widely accused of coming to power through fraudulent elections, there was no clear sign that the latest measures would succeed in pushing him toward the exit.

On a day that began with Guaido urging “all options” to be considered to remove Maduro, the threat of military intervention seemed if anything weaker after the meeting.

Guaido, sitting next to Pence at the meeting, asked for a moment of silence for those killed in what he called the “massacre” of the weekend.

Guaido himself could be in danger from the Maduro regime, Colombian Foreign Minister Carlos Holmes Trujillo said, speaking on behalf of the Lima Group.

“There’s information about serious and credible threats to the life and integrity of Juan Guaido and his family, as well as to his wife’s family. From Bogotá, we want to hold the usurper Maduro responsible for any violent action against Guaido, against his wife and against their relatives,”

At least three people were killed and almost 300 wounded during protests and clashes on Saturday as U.S.-backed aid convoys attempted to enter Venezuela to deliver food and medicine.

In a joint statement at the close of the meeting, the Lima Group said Maduro was a threat to peace and security in the region and called for his immediate exit, a democratic transition and free elections.

Guaido, recognized by most Western nations as Venezuela’s legitimate leader, has urged the bloc to consider “all options” in ousting Maduro.

But the Lima Group said it “reiterates the conviction that the transition to democracy must be conducted by the Venezuelans themselves peacefully and within the framework of the Constitution and international law,” the statement said.

U.S. says to withdraw all remaining diplomatic personnel from Venezuela

The United States is to withdraw all remaining diplomatic personnel from Venezuela this week, the U.S. State Department announced late... Read More...

US military planes land near Venezuela border with aid