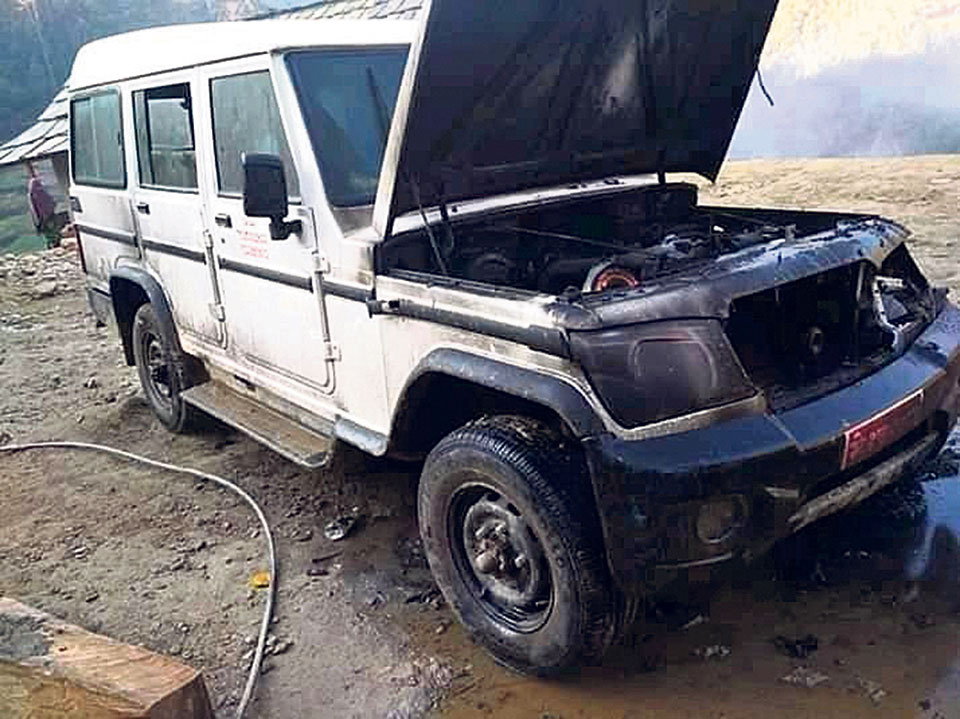 A vehicle used by Gangadev Rural Municipality has been torched by an unidentified group on Wednesday. Photo: Dinesh Subedi/Republica

According to the District Police Office (DPO), Rolpa, an unidentified group set the Scorpio jeep (Bhe 1 Cha 2785) parked outside the ward office in Gangadev-4 on fire.

The rural municipality had rented the jeep for the official use of Chairperson Bir Bahadur Khatri. The vehicle was completely destroyed by the fire.

Deputy Superintendent of Police (DSP) Deepak Khadka of Rolpa, informed Republica that police have started investigation into the case.

Similarly, an unidentified group tried to vandalize another vehicle in Tribeni Rural Municipality of Rolpa the same day. The group broke the window of the vehicle (Ba 2 Jha 3652) by pelting stones. The vehicle belongs to the rural municipality. Police have suspected the involvement of Netra Bikram Chand-led Maoist party behind both the incidents.

The two incidents occurred on the same day when a complaint was filed against Netral Bikram Chand, chief of the CPN Maoist along with a dozen more leaders. Police lodged the complaint against Chand and other leaders accusing them of their involvement in bomb explosion at Ncell's office and 15 towers across the country a week ago.

DSP Khadka further informed that police have already arrested three people for their alleged involvement in the explosions.

"Three cadres of CPN Maoist have been detained from various places for their involvement in the explosions," said DSP Khadka, adding, "We had to arrest them as they tried to disturb the peace and security of the nation."

This is the first time that a complaint has been lodged against Chand in his home district, Rolpa. Reportedly, Chand had instructed his cadres to blast bombs at Ncell's office and towers across the country.

KAPILVASTU, August 11: An unidentified group set fire on government vehicle which was used by the chief of rural municipality... Read More...

One actually realizes the pleasant change that occurred only after personally visiting Thamel. Cleanliness activities have started in the area,... Read More...

One killed, 22 injured in bus accident
29 seconds ago