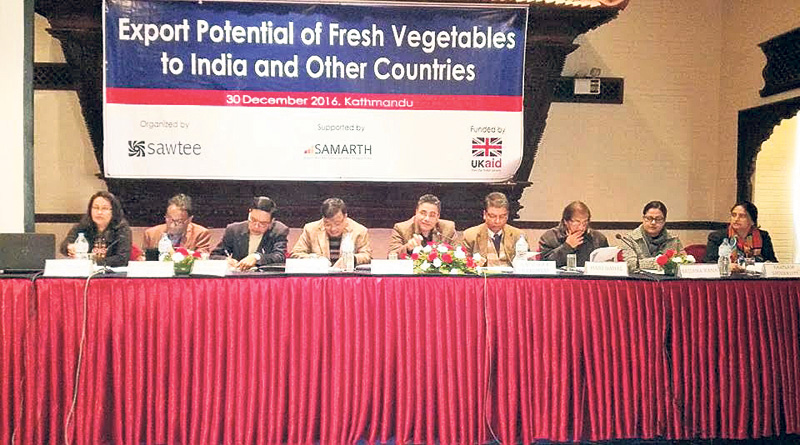 At an event held during the launch of the finds held Friday, experts discussed the export potential of fresh vegetables to India and other countries and the barriers to trade.

The discussion was based on a research study carried out by South Asia Watch on Trade, Economics and Environment (SAWTEE) with support from SAMARTH-NMDP at custom points in Bhairahawa, Birgunj, Biratnagar, Jhapa, Dhangadi, Mahendranagar and Nepalgunj.

Vegetable export was analyzed from the perspective of supply, demand and issues related to the market.

Presenting the findings, former Commerce Secretary and a Senior Consultant at SAWTEE Purushottam Ojha pointed out the problems faced by Nepali traders at border crossings with India, including the produce not being able to meet the Sanitary and Phytosanitary (SPS) standards set by India.

“There isn’t proper coordination and harmonization of standards between the Nepali and Indian SPS and technical standards. Lack of integrated laboratories for quality certifications and the absence of mutual recognition of accreditation between Nepal and India have left the fate of Nepal’s fresh produce exports at the mercy of Indian customs offices,” Ojha said.

He further added that non-tariff measures which discourage trade through the customs points have given rise to high incidence of informal trade. The research found that a huge amount of fresh vegetables were transported informally through the custom points.

Ojha also insisted on the importance of having proper measures related to Pest Risk Analysis (PRA) to make Nepali vegetables suitable for export not only to India but to third countries as well.

Similarly, Neelu Thapa, Program Coordinator at SAWTEE, said off-season vegetables like bitter gourd, pointed gourd, sponge gourd, and mustard leaf, among others were preferred by Indian consumers for their better quality and could be sold at higher price in India. She further added that Bangladesh could emerge as a lucrative market for Nepali fresh vegetables but a high tariff rate of 25 percent was a discouraging factor. At the same time, potential for exporting vegetables to countries in the Middle East was also encouraging, provided that Nepali suppliers were able to meet their strict sanitary and technical standards, she said.

The study suggested measures needed to develop a concerted-action agenda that would need to be followed in order to address the problems related to exporting vegetables and establishing an effective linkage with export markets.

Commerce Secretary Naindra Prasad Upadhyay said Nepal’s inability to meet technical and food quality standard hampered its fresh produce export potential. Investment should be made to increase the productive capacity of vegetable producers and to improve infrastructure in terms of storage facilities and collection centers, he said.

SAWTEE Chairman Posh Raj Pandey urged stakeholders to develop mechanisms so that Nepali products could comply with the technical standards set by importers.

KATHMANDU, July 23: The Narayanghat-Mugling road section saw recurring obstructions the past year, but it had little effect on the vegetable... Read More...

Export of metal craft up by 50 percent