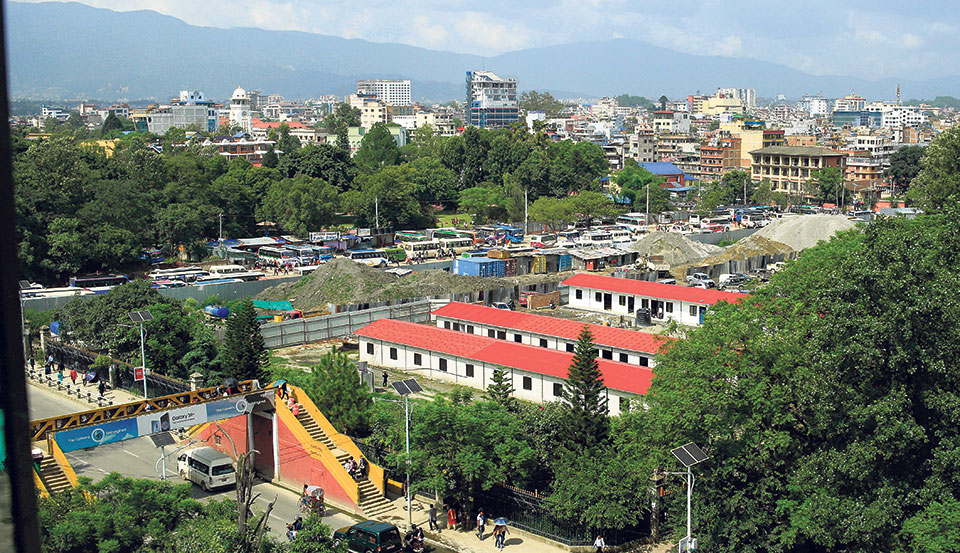 KATHMANDU, June 30: Various public sector bodies are continuing to occupy the Khula Manch space, threatening the very existence of the historic  grounds with  open air theatre for public gatherings in the nation’s capital.

Bir Hospital has started constructing three prefabricated structures inside the public space with the purpose of running an emergency field hospital. According to officials from Kathmandu Metropolitan City (KMC), the hospital is being constructed without seeking permission from KMC, the body responsible for the protection of open spaces within the metropolitan  area.

Meanwhile, KMC has allowed Durbar High School to set up a storage facility at Khula Manch for  construction materials being used for the school’s reconstruction.

KMC  already took up half  the open space when it shifted the old bus park there . The move was widely criticized and seen as an encroachment of the commons on the pretext  of setting up a temporary facility.

The authorities deny that a field hospital is under construction  where the Khula Manch open air theatre stands.

“It is true  we have allowed Durbar High School to use the open space temporarily but we are not aware of a field hospital being constructed by Bir Hospital,” KMC spokesperson Gyanendra Karki said. According to him, KMC has allowed the school to use the open space for no more than six months since the school lacks enough space of its own to store construction material.

“Once the construction work is over, they have to clear out,” he said. He also said  the temporary bus park  will be shifted out after  construction of the bus terminal is completed and the open space will be restored to its earlier state.

KMC claims to be the authority for the management of Khula Manch, and it is ironic that it seems unaware of the construction of the field hospital.  Spokesperson Karki said, “Construction of any structure without  KMC consent is illegal.”

KAVRE, May 16:CPN-UML is taking the lead in Kavre. Nepali Congress and Maoist Center have finished second and third respectively... Read More...

KHOTANG, Feb 17: Protests by the employees of local bodies in Khotang has hampered the day-to-day works of the District Development... Read More...

KATHMANDU, July 5: Nepal, which is said to be at a high risk of becoming a transit point for international... Read More...

Former PM Oli receives tika from his parents
32 minutes ago