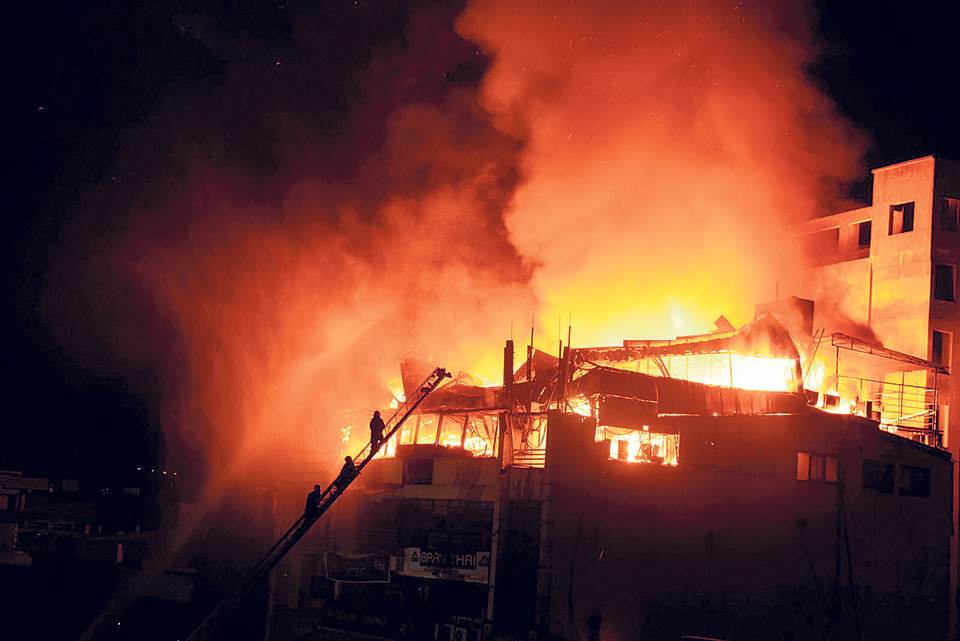 Fire rages at the Victory Lounge, a Durbar Marg-based nightclub, in the evening on October 13. The fire destroyed property but no one was injured. The fire was doused after over two hours. Photo: Keshab Thoker/Republica

KATHMANDU, Oct 19: Last week’s massive fire at Victory Lounge on Durbarmarg destroyed property worth over Rs 60 million. The club located on the sixth floor of a private building caught fire after an electrical short-circuit. Was this a tragedy just waiting to happen? The incident exposes an egregious lack of resources and manpower for dealing with big fires that may break out in Kathmandu Valley.

“Incidents like this are what we have expected all along,” said Lila Raj Gachha Magar, chief of Juddha Vaarun Yantra (fire brigade), Kathmandu. When asked why this state of affairs persisted, Gachha Magar pointed to lack of awareness about fire safety and the public’s tendency to leave it all to the government.

According to him, the Valley reports around 30-35 fire incidents per month.

Gachha Magar also talked about a massive fire back in April at Subisu, an internet service provider, at Baluwatar. The fire started due to a barrel of petrol kept in the building. And last November, a house in Lokanthali, Bhaktapur went up in flames, again because of a short circuit. In both incidents the damage caused was in the millions. “What these cases show is utmost negligence and lack of awareness,” he said.

There are about 300,000 buildings in the Valley. Every year about 1,000 new houses are built and almost all of them are higher than one storey. Only a few buildings have fire fighting equipment.

Victory Lounge also had no firefighting gear. When the security guard first realized that there was a short circuit, he brought a fire extinguisher from the third floor but did not know how to use it.

Gachha Magar also said that a lot of people do not know the emergency telephone number for the fire brigade. “We have seen lots of cases where people dial 100 in case of fire”. The emergency number is 101 and dialing 100 just delays any response.

Kathmandu fire brigade office, which is on-call round the clock, has a team of 33. Depending upon the scale of a fire and the radius, eight to 10 firefighters are dispatched. If the fire is huge, they are joined by personnel from the Armed Police Force and the army. The fire brigade has three fire engines, one rescue vehicle, one fire truck and just two fire ladders of 25 and 30 meters each.

Similarly, the fire brigade in Lalitpur has an operating outfit of 22 members and four vehicles but no special fire ladders. “We have been using ordinary ladders but these can only reach up to a third floor,” said Raj Kumar Thakuri, one of the firefighters, adding, “If fire breaks out on a higher floor we have to call in Kathmandu fire brigade and the police ”.

When asked if the existing equipment could cope with big fire outbreaks in the city, both the fire brigade offices admitted they could not. But they said they have put in demands for taller ladders and some other fire fighting equipment with the government.

KATHMANDU, March 2: The economic cost of traffic congestion in the Kathmandu Valley was above Rs 16.5 billion in 2018,... Read More...