US will take action on Syrian chemical attacks if UN doesn't 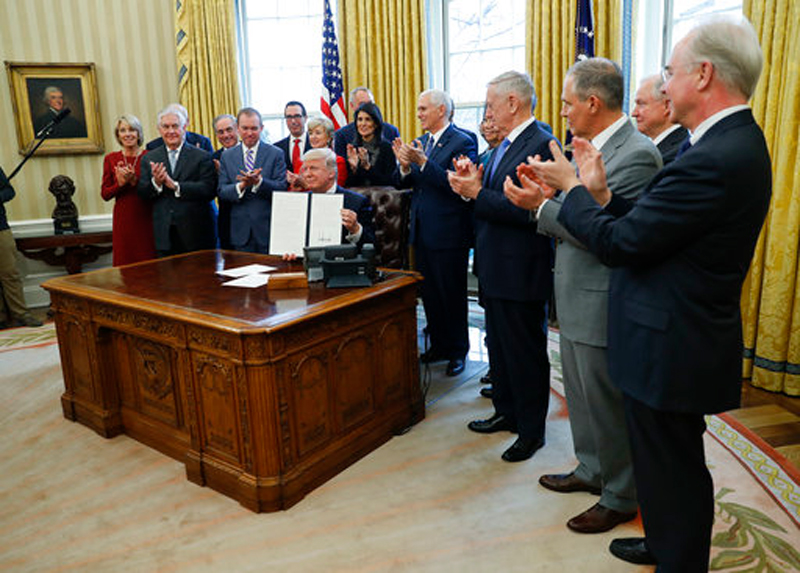 UNITED NATIONS (AP) — U.S. Ambassador Nikki Haley warned Wednesday that the Trump administration will take action against chemical attacks in Syria that bear "all the hallmarks" of President Bashar Assad's government if the U.N. Security Council fails to act.

Haley urged the council at an emergency meeting to immediately approve a resolution drafted by the U.S., Britain and France that condemns and threatens consequences for the use of chemical weapons, especially in Tuesday's attack that killed dozens of people in rebel-held Idlib province.

"For the sake of the victims, I hope the rest of the council is finally willing to do the same," she added.

Haley spoke after Russian Foreign Ministry spokeswoman Maria Zakharova announced Moscow's opposition to the draft resolution. She called it "categorically unacceptable" because "it runs ahead of the investigation results and names the culprit, Damascus."

"The main task now is to have an objective inquiry into what happened," Russia's deputy U.N. ambassador Vladimir Safronkov told the Security Council. "Up to now all falsified reports about this incident have come from the White Helmets or the Syrian Observatory for Human Rights based in London which have been discredited long ago."

He said that from 11:30 a.m. until 12:30 p.m. on April 4, the Syrian government carried out an airstrike on the eastern edge of the opposition-held town of Khan Sheikhoun "on a large warehouse of ammunition and military equipment."

On that compound, he said, there was a facility "to produce ammunition with the use of toxic weapons" which was supposed to be used in Iraq and Aleppo.

"Their use was confirmed last year by Russia and military experts," Safronkov said. "The symptoms of those affected in Khan Sheikhoun were the same as those by people who were affected last year in Aleppo."

"We have every indication that this was a sustained attack using aircraft over a number of hours," Rycroft said. "We see all the signs of an attack using a nerve agent capable of killing over a hundred people and harming hundreds more."

Holding up photos of victims of the attack, Haley accused Russia of blocking action and closing its eyes to the "barbarity" of three previous chemical attacks that investigators blamed on the Syrian government by vetoing a resolution in late February that would have imposed sanctions on those responsible.

"The truth is that Assad, Russia, and Iran have no interest in peace," she said. "The illegitimate Syrian government, led by a man with no conscience, has committed untold atrocities against his people for six years."

Haley said Assad has shown he isn't interested in participating in "a meaningful political process, Iran has reinforced Assad's military, and Russia has shielded Assad from U.N. sanctions."

"If Russia has the influence in Syria that it claims to have, we need to see them use it," she said. "We need to see them put an end to these horrific acts. How many more children have to die before Russia cares?"

The resolution drafted by the U.S., Britain and France would condemn the use of chemical weapons in Syria, especially on Tuesday, "in the strongest terms" and back an investigation by the international chemical weapons watchdog, the Organization for the Prohibition of Chemical Weapons.

It stresses that the Syrian government, under previous Security Council resolutions, is obligated to provide OPCW investigators and a U.N.-OPCW team charged with assessing blame for chemical attacks with information on all flight plans and air operations on April 4 and the names of commanders of any helicopter squadrons.

It reminds the government that it is also obligated to immediately provide investigators with access to air bases where they believe chemical weapons attacks may have been launched.

Russia's Safronkov told the council that several major provisions of the resolution are unacceptable to Moscow and France's U.N. Ambassador Francois Delattre told reporters later that negotiations on the text have started "with a good spirit."

He said he thinks there's a chance for agreement, if everyone is ready to compromise.

"Our objective is to go for a vote the sooner the better ... and we want a swift and strong resolution," he said, adding that a vote was unlikely late Wednesday.

The best option would be united action by the Security Council, he said when asked about possible unilateral action by the United States. "I'm concerned ... by the risk of inaction at this stage."

He said the army doesn't have any type of chemical weapons and "we have never used them and we will never use them."

Mounzer called Syria the victim of "falsification and fabrication" by some permanent members of the Security Council and "armed terrorist groups" backed by several U.N. member states. He didn't name any countries.

KATHMANDU, Dec 1: A group of UN human rights specialists has issued an urgent call for action to ensure a future... Read More...

MCC will be passed without any amendments: PM Deuba
14 hours ago

Permission granted to cut around 7,000 trees to widen Mugling-Pokhara road
12 hours ago

Seven towers ready for construction of transmission line
15 hours ago