US warns North Korea that diplomatic window is closing 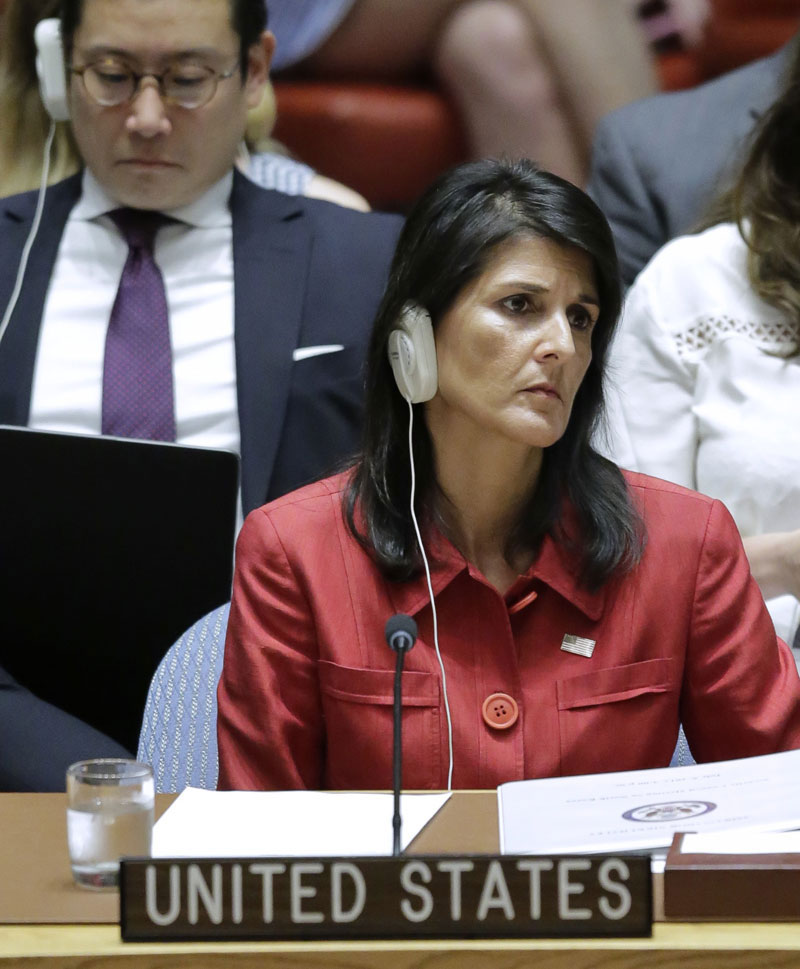 WASHINGTON, July 6: The United States warned Wednesday that North Korea was "quickly closing off" the prospect of a diplomatic resolution to its provocations, as the Trump administration launched a government-wide effort to identify options for confronting Pyongyang following its unprecedented intercontinental ballistic missile launch.

President Donald Trump and other senior officials dangled the prospect of punishing countries that trade with North Korea — a threat aimed directly at China, Pyongyang's biggest benefactor. In a tweet Wednesday morning, Trump questioned why the U.S. should continue what he sees as bad trade deals "with countries that do not help us."

His message was bolstered at the United Nations, where U.S. Ambassador Nikki Haley told an emergency meeting of the Security Council that the Trump administration was eyeing penalties against "any country that does business with this outlaw regime." She also raised the specter of military action, declaring that the U.S. was prepared to use force if necessary.

"Their actions are quickly closing off the possibility of a diplomatic solution," she said of North Korea's leaders.

Some administration officials are still holding out hope of persuading China to ratchet up economic pressure on Pyongyang, despite Trump's increasingly pessimistic attitude toward Beijing. Trump, who departed for Europe early Wednesday, is scheduled to meet Chinese President Xi Jinping on the sidelines of the Group of 20 summit in Germany.

Thus far, both China and North Korea have proven to be impervious to Trump's tough talk and threatening tweets. Pyongyang heightened tensions this week with the test of a missile capable of hitting the U.S., a step officials described as a worrisome escalation by an unpredictable regime and perhaps the most pressing threat facing a new U.S. president with little national security experience.

Following the launch, the White House, Treasury Department, State Department, Pentagon and intelligence agencies accelerated discussions on options for responding to Pyongyang's nuclear pursuits. The talks center in part on the same bucket of ideas prior administrations have considered, including direct diplomatic negotiations and pre-emptive military action.

Haley announced that the U.S. will put forward a new Security Council resolution in the coming days "that raises the international response in a way that is proportionate to North Korea's escalation."

She offered no details but said that if the council is united, the international community can cut off major sources of hard currency to North Korea, restrict oil to their military and weapons programs, increase air and maritime restrictions, and hold senior officials accountable.

South Korea's president said the world should look at tougher sanctions against North Korea and insisted the problems across his border should be addressed through diplomatic channels.

"I think that the North Korean question should be solved by peaceful means," said President Moon Jae-in, who will also meet Trump at the G-20 gathering.

The North Korean threat appears certain to hang over Trump's European trip, which opens in Poland. Trump is expected to use the trip to try to forge consensus with European Union partners, which could also put more financial pressure on North Korea.

As he flew to Warsaw on Air Force One on Wednesday, Trump also spoke by phone about North Korea with Egyptian President Abdel Fattah el-Sisi, emphasizing the need for countries to implement Security Council resolutions. The White House said Trump also discussed the need for nations to "stop hosting North Korean guest workers" — an issue Secretary of State Rex Tillerson also mentioned in his response a night earlier to the missile launch.

Restricting guest workers is one way the U.S. and other countries could try to reduce North Korea's access to foreign currency. Some 50,000 to 60,000 North Koreans work abroad, mostly in Russia and China, South Korea's spy service has said, including at about 130 restaurants North Korea operates overseas. The workers' mission involves earning money to bring into North Korea.

North Korea conducts about 90 percent of its trade through China, giving Beijing enormous sway over the reclusive government. Despite forging a friendly relationship with Xi, Trump has become increasingly dismayed at China's reluctance to take tougher action against North Korea. He asserted Wednesday that "trade between China and North Korea grew almost 40% in the first quarter."

In April, Chinese customs data said total two-way trade between China and North Korea increased 36.8 percent in the first quarter of this year compared with the same period a year earlier. However, raw data from the first quarter showed that total two-way trade increased by only 7.4 percent. It was unclear why the customs agency reported a higher rate.

Anthony Ruggiero, a North Korea expert at the Foundation for the Defense of Democracies, said the U.S. could try to prod Beijing to take a tougher line on North Korea by exploiting Chinese banks and other companies' desire for access to the U.S. dollar.

"The administration can give them a choice: Do business with North Korea or have access to the U.S. financial system," Ruggiero said.

The Trump administration signaled its willingness to take that approach last week when it announced it was blacklisting a small Chinese bank over dealings with North Korea.

China has long resisted intensifying economic pressure on neighboring North Korea, in part out of fear of the instability that could mount on its doorstep, including the possibility of millions of North Koreans fleeing into China. China has also been concerned that a reunited, democratic Korea — dominated by South Korea — would put a U.S. ally, and possibly U.S. forces, on its border.

North Korea said on Sunday it was ready to sink a U.S. aircraft carrier to demonstrate its military might, in... Read More...