US to help Pakistan in war against terror: Mark Toner 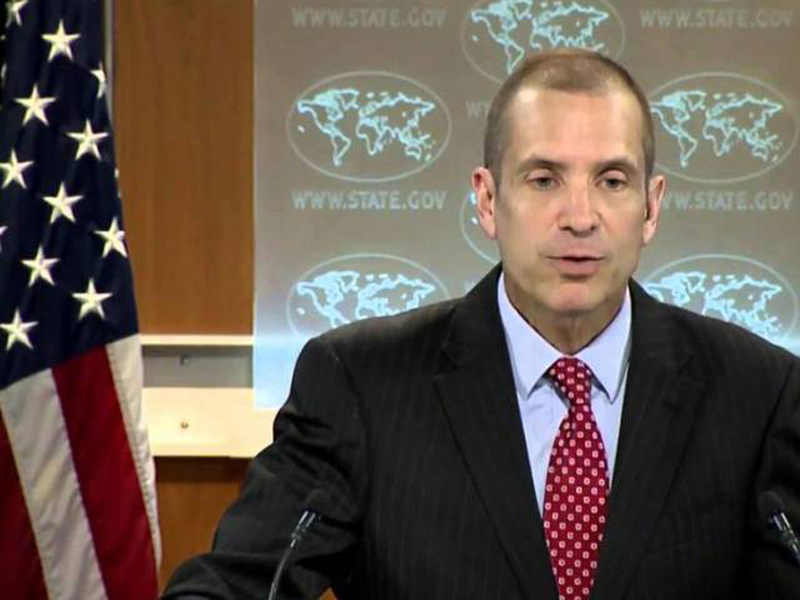 WASHINGTON, Oct 15: Asserting that India and Pakistan should adopt a “conciliatory approach” to resolve their “contentious issues”, the US has called for greater cooperation and dialogue between the two countries to bring down the recent tensions.

In a couple of statements from his press briefing, US State Department deputy spokesman Mark Toner  said that Pakistan has suffered a lot in the hands of terrorism.

USA had always laid stress on Pakistan to take action against all militants and terrorist outfits in the country, he added.

“We want to help Pakistan in its war against terrorism,” he said. “Pakistan should also go after terrorist outfits inside its territory,” he said.

“Our general position on this is that we want to see greater cooperation and greater dialogue between Pakistan and India,”

Earlier, at his daily news conference  Mark Toner said, “It’s frankly to the benefit of both countries. That includes, certainly, security issues. We want to see tensions go down, and we want to see a greater cooperation between the two countries. Now, we’re not there right now, but that’s certainly our inclination.”
\
Noting that the US’ position on Kashmir has not changed, Toner said it was in the interests of both Pakistan and India to see a stable and secure Afghanistan emerge from the years of fighting.

“Certainly, in the interest of regional security as well, there’s a lot of contentious issues between Pakistan and India, but the two countries we would encourage to take a more conciliatory approach to each other and to work through some of these issues for the greater good of the region,” he said.

“We certainly will look into any credible allegations of human rights abuses wherever they occur. I can’t speak as to whether these particular abuses will find their way into the report or not. That’s part of the process of compiling the report,” Toner said.
Toner said the US position on Kashmir remains the same, which is that the two countries should work out a solution between them.

On the overall situation in Afghanistan, the spokesman said that it had been a difficult season and the situation in Helmand was of a particular concern.

He said the Taliban remain a very resilient insurgency to this date and they have continued to challenge the Afghan government forces. He said the latest attack in Helmand was just another example and another effort by the Taliban to create and sow instability and undermine the progress that the country has made over the past 15 years.

“Thus far, while the Afghan security forces have certainly been challenged, they’ve held the line and they’ve performed remarkably well,” he added. However, he said the United States wants to see an Afghan-led, Afghan-owned peace process which still remained the best way to bring about a stable and prosperous future for Afghanistan.

He added the Pakistani media had also been highlighting the issue of Indian atrocities in occupied Kashmir.

The FO spokesman said Prime Minister’s envoys Mushahid Hussain and Dr Shahzia had met with the United Nations General Assembly president and a dossier had been submitted of human rights violations in occupied Kashmir.

According to Zakaria, the PM’s envoys had highlighted the Kashmir issue on the global stage. The spokesman called on the international community to take notice of the human rights violations.

The spokesman further said Pakistan’s stance on the Kashmir issue was supported by Turkey, while a dossier had also been given the British government by Pakistan’s High Commissioner.

Adviser to the Prime Minister on Foreign Affairs, Sartaj Aziz in a televised interview on Thursday said that Kashmir would remain a focus of Pakistan’s foreign policy and clarified that there was no backdoor or track-II diplomacy between Pakistan and India as such contacts were established only when conditions were favourable.

The adviser said India had a history of blaming Pakistan after every terror incident that hit its soil without providing evidence and this was the reason why several peace talks between the two neighbouring countries halted on several occasions.

Aziz said that Pakistan would soon present a dossier to the UN Secretary General on the issue of Indian involvement in the troubled province of Balochistan and Kulbushan Yadav, the Indian spy who was arrested in Pakistan.

He said that Pakistan was moving forward effortlessly with the ongoing political realignments on global and geostrategic fronts.

The adviser clearly dismissed the perception that the country was facing any sort of isolation at the diplomatic level, saying it was not easy as some countries think to isolate Pakistan.

Development of Eurasia by Russia and China, activation of SCO (Shanghai Cooperation Organisation) and the formation of AIB (Asian Investment Bank indicated major realignments, he said.

By 2017, Pakistan would also become a permanent member of SCO, announced the adviser.

Although Pakistan enjoyed good bilateral ties with the United States (US), the United Kingdom (UK), European Union (EU), the Middle East and other regions of the world, few countries of the Western world were not happy with Pakistan’s growing relations with China, Aziz said.

Tensions between Pakistan, India should go down: Mark Toner

The United States has once again called upon Pakistan and India to peacefully resolve all the bilateral issues as it wants greater cooperation and comprehensive dialogues between the two nuclear-capable states.

The Deputy State Department Spokesperson, Mark Toner while addressing a press briefing in Washington said, “The tensions between Pakistan and India should go down.”

Toner also said the US stands by its stance over Kashmir. He further commented on the human rights violations in Indian-occupied Kashmir saying, “The United States will look into human rights abuses wherever they occur.”

“A peaceful and stable Afghanistan is vital for regional peace and security,” he added.

KATHMANDU, June 12: A rally was held on the occasion of the 16th World Day Against Child Labour here in... Read More...

VIDEO: TIA abuzz with passengers after six months  as domestic flights resume on Monday
53 minutes ago