US interrogates detainees in Yemen prisons rife with torture 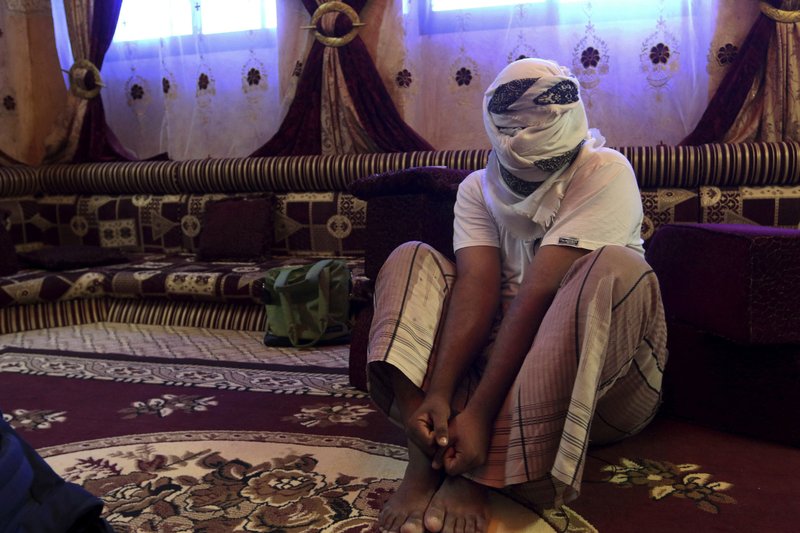 MUKALLA, June 22 :Hundreds of men swept up in the hunt for al-Qaida militants have disappeared into a secret network of prisons in southern Yemen where abuse is routine and torture extreme — including the “grill,” in which the victim is tied to a spit like a roast and spun in a circle of fire, an Associated Press investigation has found.

Senior American defense officials acknowledged Wednesday that U.S. forces have been involved in interrogations of detainees in Yemen but denied any participation in or knowledge of human rights abuses. Interrogating detainees who have been abused could violate international law, which prohibits complicity in torture.

The AP documented at least 18 clandestine lockups across southern Yemen run by the United Arab Emirates or by Yemeni forces created and trained by the Gulf nation, drawing on accounts from former detainees, families of prisoners, civil rights lawyers and Yemeni military officials. All are either hidden or off limits to Yemen’s government, which has been getting Emirati help in its civil war with rebels over the last two years.

The secret prisons are inside military bases, ports, an airport, private villas and even a nightclub. Some detainees have been flown to an Emirati base across the Red Sea in Eritrea, according to Yemen Interior Minister Hussein Arab and others.

Several U.S. defense officials, speaking on condition of anonymity to discuss the topic, told AP that American forces do participate in interrogations of detainees at locations in Yemen, provide questions for others to ask, and receive transcripts of interrogations from Emirati allies. They said U.S. senior military leaders were aware of allegations of torture at the prisons in Yemen, looked into them, but were satisfied that there had not been any abuse when U.S. forces were present.

“We always adhere to the highest standards of personal and professional conduct,” said chief Defense Department spokeswoman Dana White when presented with AP’s findings. “We would not turn a blind eye, because we are obligated to report any violations of human rights.”

In a statement to the AP, the UAE’s government denied the allegations.

“There are no secret detention centers and no torture of prisoners is done during interrogations.”

Inside war-torn Yemen, however, lawyers and families say nearly 2,000 men have disappeared into the clandestine prisons, a number so high that it has triggered near-weekly protests among families seeking information about missing sons, brothers and fathers.

None of the dozens of people interviewed by AP contended that American interrogators were involved in the actual abuses. Nevertheless, obtaining intelligence that may have been extracted by torture inflicted by another party would violate the International Convention Against Torture and could qualify as war crimes, said Ryan Goodman, a law professor at New York University who served as special counsel to the Defense Department until last year

At one main detention complex at Riyan airport in the southern city of Mukalla, former inmates described being crammed into shipping containers smeared with feces and blindfolded for weeks on end. They said they were beaten, trussed up on the “grill,” and sexually assaulted. According to a member of the Hadramawt Elite, a Yemeni security force set up by the UAE, American forces were at times only yards away. He requested anonymity because he was not authorized to discuss the matter.

“We could hear the screams,” said a former detainee held for six months at Riyan airport. “The entire place is gripped by fear. Almost everyone is sick, the rest are near death. Anyone who complains heads directly to the torture chamber.” He was flogged with wires, part of the frequent beatings inflicted by guards against all the detainees. He also said he was inside a metal shipping container when the guards lit a fire underneath to fill it with smoke.

Like other ex-detainees, he spoke on condition of anonymity for fear of being arrested again. The AP interviewed him in person in Yemen after his release from detention.

The AP interviewed 10 former prisoners, as well as a dozen officials in the Yemeni government, military and security services and nearly 20 relatives of detainees. The chief of Riyan prison, who is well known among families and lawyers as Emirati, did not reply to requests for comment.

Defense Secretary James Mattis has praised the UAE as “Little Sparta” for its outsized role in fighting against al-Qaida.

U.S. forces send questions to the Emirati forces holding the detainees, which then send files and videos with answers, said Yemeni Brig. Gen. Farag Salem al-Bahsani, commander of the Mukalla-based 2nd Military District, which American officials confirmed to the AP. He also said the United States handed authorities a list of most wanted men, including many who were later arrested.

Al-Bahsani denied detainees were handed over to the Americans and said reports of torture are “exaggerated.”

The network of prisons echoes the secret detention facilities set up by the CIA to interrogate terrorism suspects in the aftermath of the 9/11 attacks. In 2009, then-President Barack Obama disbanded the so-called “black sites.” The UAE network in war-torn Yemen was set up during the Obama administration and continues operating to this day.

“The UAE was one of the countries involved in the CIA’s torture and rendition program,” said Ryan Goodman, a law professor at NYU, who served as special counsel to the Defense Department until last year. “These reports are hauntingly familiar and potentially devastating in their legal and policy implications.”

The UAE is part of a Saudi-led, U.S.-backed coalition meant to help Yemen’s government fight Shiite rebels known as Houthis, who overran the north of the country. At the same time, the coalition is helping the U.S. target al-Qaida’s local branch, one of the most dangerous in the world, as well as Islamic State militants.

A small contingent of American forces routinely moves in and out of Yemen, the Pentagon says, operating largely along the southern coast. Under the Trump administration, the U.S. has escalated drone strikes in the country to more than 80 so far this year, up from around 21 in 2016, the U.S. military said. At least two commando raids were ordered against al-Qaida, including one in which a Navy SEAL was killed along with at least 25 civilians.

A U.S. role in questioning detainees in Yemen has not been previously acknowledged.

A Yemeni officer who said he was deployed for a time on a ship off the coast said he saw at least two detainees brought to the vessel for questioning. The detainees were taken below deck, where he was told American “polygraph experts” and “psychological experts” conducted interrogations. He did not have access to the lower decks. The officer spoke on condition of anonymity because he feared retaliation for discussing the operations.

Senior U.S. defense officials flatly denied the military conducts any interrogations of Yemenis on any ships.

“We have no comment on these specific claims,” said Jonathan Liu, a CIA spokesman, adding that any allegations of abuse are taken seriously.

The Yemeni officer did not specify if the ‘Americans on ships’ were U.S. military or intelligence personnel, private contractors, or some other group.

Two senior Yemen officials, one in Hadi’s Interior Ministry and another in the 1st Military District, based in Hadramawt province where Mukalla is located, also said Americans were conducting interrogations at sea, as did a former senior security official in Hadramawt. The three spoke on condition of anonymity because they were not authorized to discuss the U.S. role.

Former detainees and one Yemen official provided the AP with the names of five suspects held at black sites who were interrogated by Americans.

One detainee, who was not questioned by U.S. personnel, said he was subject to constant beatings by his Yemeni handlers but was interrogated only once.

“I would die and go to hell rather than go back to this prison,” he said. “They wouldn’t treat animals this way. If it was bin Laden, they wouldn’t do this.”

Associated Press writers Lolita Baldor and Desmond Butler in Washington and Ahmed al-Haj and Maad al-Zikry in Yemen contributed to this report.

Infographics: No end in sight for Yemen conflict

No end in sight for Yemen conflict ... Read More...