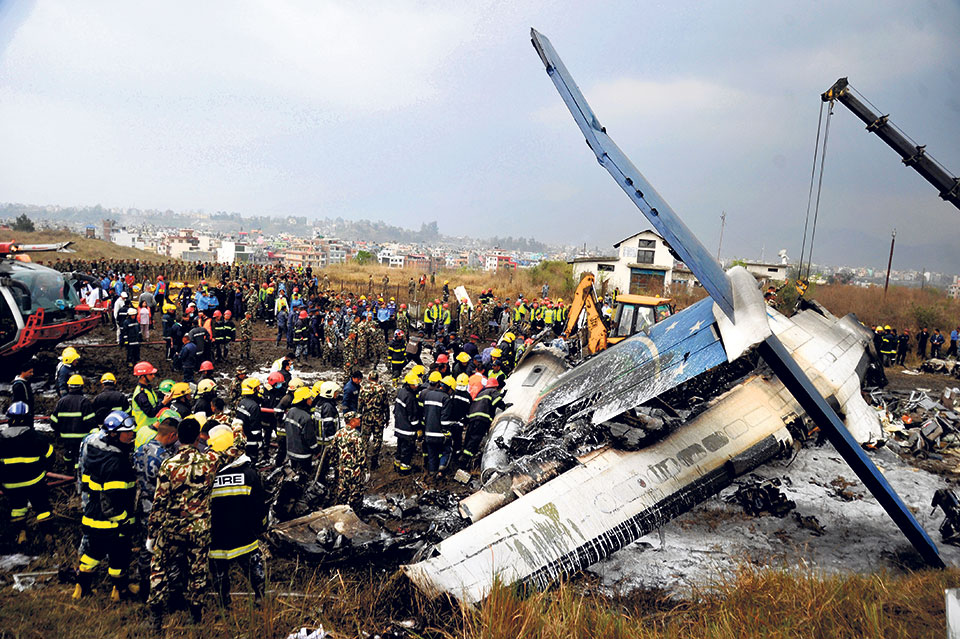 KATHMANDU, Jan 28: A high-level commission formed to investigate the March 2018 US-Bangla Airlines plane crash-landing has blamed the pilot for the fatal accident that killed 51 people including the pilot. Twenty passengers were injured in the crash.

The probe panel headed by former Tourism Secretary Yajna Prasad Gautam submitted its report to the government on Sunday. The report has concluded that the pilot captain Abid Sultan was undergoing “severe mental stress” and was “emotionally disturbed” while landing at the Tribhuvan International Airport in Kathmandu.

The 52-year-old pilot was declared unfit to fly in 1993 due to his medical condition (depression). He was later declared medically fit only in 2002.

“There is clear evidence that PIC (pilot-in-command) was harboring severe mental stress. The effect of stress was evident with the fact that he was irritable, tense, moody, and aggressive at various times,” states the report further. “This is probably the reason for his undue aggressive behavior and anger aimed at ATC personnel as well as operation staff.”

The pilot, according to the report, was fatigued and tired due to lack of sleep the previous night and due to the stress he was undergoing.

Medical examination of pilot in successive annual mandatory “medical” was not focused on his previous medical condition of depression. Probe panel members believe his medical condition was missing in the self-declaration form of annual medical report.

Flight data recorders revealed the pilot was using foul language and abusive words in conversation with a junior female crew member. Before the plane was landing at Kathmandu airport, first officer had asked the pilot about the missed Approach Procedures of Kathmandu but the PIC never briefed her. The PIC, according to the report, rather got engaged in unnecessary and personal talks with the first officer. “Failure to react after missing the runway for the first time, not doing standard go around procedures after missing the Missed Approach Point (MAP) and impaired decision making; all were probably due to stress,” states the report.

It is stated that female colleague of the Company had questioned the pilot about his reputation as a good instructor. “The PIC, who was also an instructor pilot, was flying under stress and emotionally disturbed as he felt that the female colleague of the company questioned his reputation as a good instructor,” states the report further adding, “This together with the failure on the part of both the crew to follow the standard operating procedure at the critical stage of the flight contributed to loss of situational awareness to appreciate the deviation of the aircraft from its intended radial that disabled them sighting the runway.”

The report states the pilot missed the runway while landing at the airport. The crew members were instructed that they had missed their correct position by the Enhanced Ground Proximity Warning System. “Loss of situational awareness indulged the PIC into some dangerous maneuver of aircraft at very low altitude in the hilly and mountainous terrain around the airport,” the report said.

According to the report when the crew saw the runway, they were very low and too close to Runway 20 and not properly aligned with the runway. “For reasons unknown, probably in desperation to land, the PIC maneuvered the airplane in a very unsafe manner by forcing it to land while in a turn, with the right bank, at an angle of about 15 degrees with the RWY [runway] axis resulting the right main landing gear to make hard impact on the left of the centerline of Runway 20, approximately 1700 meters from the threshold,” reads the report in its conclusion.

After hitting the ground the aircraft went out of the runway and rolled down the slope into the grass field and caught fire which engulfed the aircraft.