US Ambassador to Nepal, Randy W Berry was welcomed with a garland of marigold on his visit to Patan Durbar Square this Wednesday. As he entered the Durbar, young girls wearing Hakupatashi (traditional Newari Sari) brought him the auspicious Newari liquor, Aila. Berry, who was accompanied by Chiri Babu Maharjan, the Mayor of Lalitpur Metropolitan City, drank the liquor to exclaim, “It's strong!”

The atmosphere in Durbar Square which was celebrating the accomplishment of the renovation of the Octagonal Krishna temple under the US government’s Ambassador Fund for Cultural Preservation (AFCP) program, and the meaningful expression of US-Nepal relations was truly 'strong'.

AFCP had provided USD 150,000 to the Kathmandu Valley Conservation Fund for the restoration of the temple which was damaged in the April 2015 Nepal earthquake. Built in 1723 AD, the temple which epitomizes the innovative form of Shikhar style masonry remains unparalleled in entire South Asia. Berry thanked everyone for having gotten the opportunity to celebrate the accomplishment of the temple’s renovation.

“America is proud to have supported this project. This temple has not only become beautiful but it has also been improved to withstand earthquakes that may come in the future,” said Berry.

Present on the occasion, Damodar Gautam, the Director General of the Department of Archeology, expressed his gratitude to the US Government for its support in the restoration and protection of Nepal's cultural heritage sites.

Similarly, Lalitpur Mayor Maharjan thanked the US government for its continuous assistance to the preservation of heritage and culture.

Secretary of Culture and Tourism, Maheshwar Neupane said that the assistance provided by the United States, in not only Patan but also in other parts of the country, has been beyond comparison. He mentioned that the help extended by the American government in bringing back lost idols and statues to Nepal had won the hearts of the Nepali people. “I would like to thank the US government for not only protecting the heritage of Nepal but also helping to bring back the lost idols of the country,” he said. He stated that it was actions like these that helped foster strong relations.

In recognition of the efforts of the talented masons, carpenters, metalworkers, and other artisans who contributed to the renovation of the Krishna Mandir and other structures in Patan, their photos have been hung in the square. The common people were delighted to witness the photos of the artisans who built the temple next to the temple itself. “We had been brought up hearing that only kings would make temples,” said 83-year-old Natibhai Maharjan of Pinchetol. “It brings me happiness to see the photos of the very brothers that built the temple,” he says. He expressed his acknowledgement of those who renovated the temple as he observed the temple that he had been worshiping since his childhood become robust again. “We have come to welcome them,” he added. “This has made us very happy.” 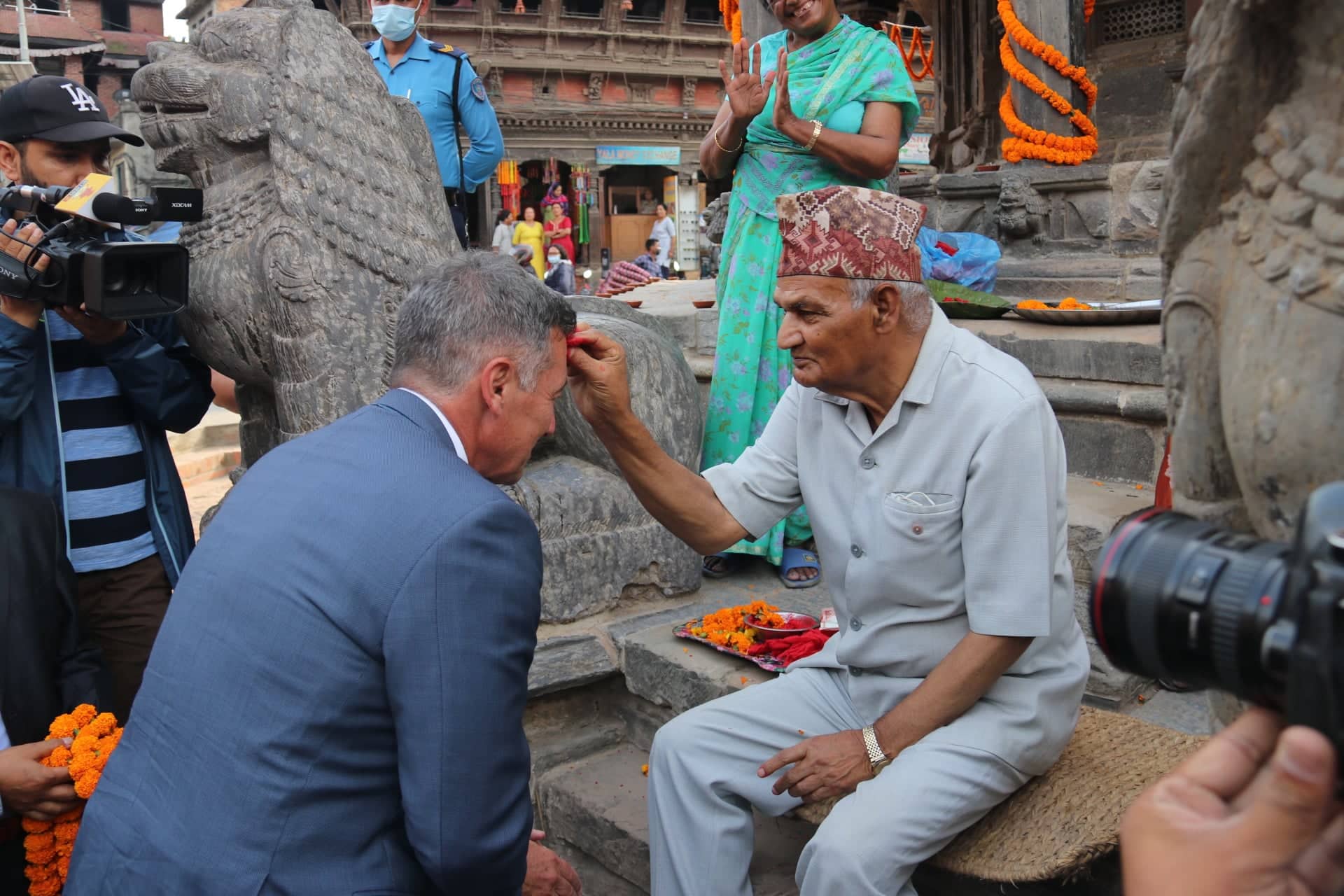 This year marks the 75th anniversary of the establishment of diplomatic relations between the United States and Nepal. On this occasion, a musical event is to be organized Thursday in Patan Durbar Square. Musical and cultural performances by musical group Kutumba, Jyapu Samaj, Mangal Toll Reform Association, Nepal Hip-Hop Foundation, Lok Dhun Nepal and Tunna Bel Thapa will be performed at a program called ‘Sangrahalaya Ma Sangeet’ at the Bhandarkhal Garden in Patan.

“Culture unites society,” said Surendra Awale of Chyasal, “This support is unforgettable.” He praised Ambassador Berry and said that the ambassador had long been working for effective US-Nepal cooperation in various fields.

Ambassador Berry said, “The Durbar Square and other similar projects across Nepal are a  testament to the 75 years of vibrant US-Nepal relations.” He went on to say, “The United States will always be a proud partner of Nepal in its efforts to preserve Nepal's unique and irreplaceable heritage.”

A Mature Relationship: Nepal and the US at 75

Relations between Kathmandu and Washington over the past seven decades have grown steadily covering a wide range of cooperation. The... Read More...

US and UK join hands to combat human trafficking in Nepal

KATHMANDU, June 14: Amid concerns from various quarters that there was duplication in the work of donor agencies, the USA and... Read More...