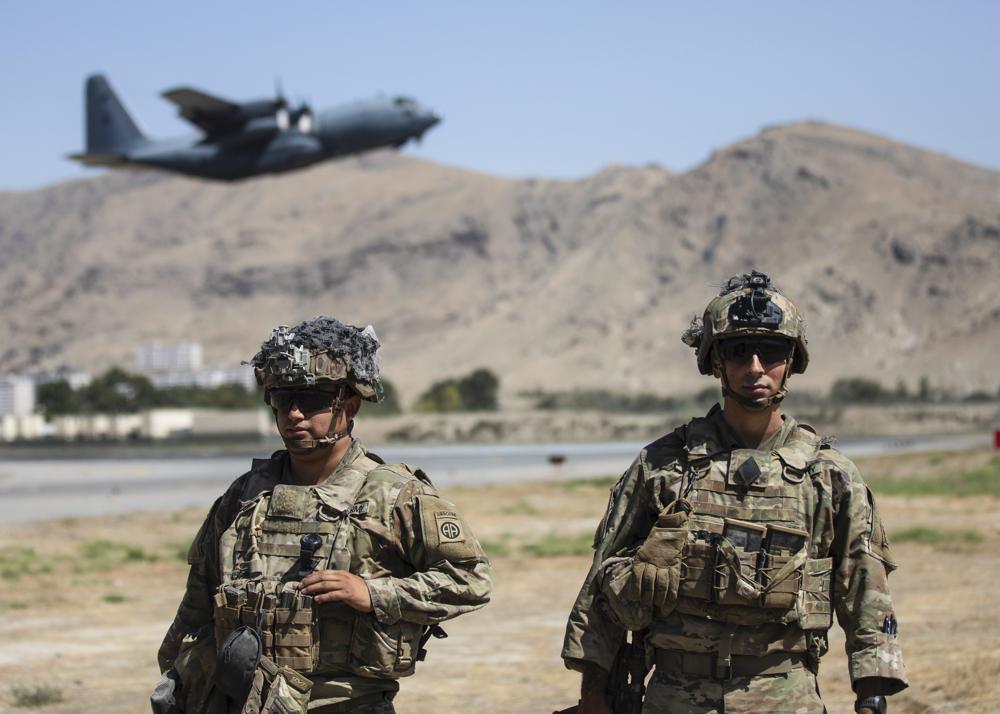 In this image provided by the Department of Defense, two paratroopers assigned to the 1st Brigade Combat Team, 82nd Airborne Division conduct security while a C-130 Hercules takes off during a evacuation operation in Kabul, Afghanistan, Wednesday, Aug. 25, 2021. (Department of Defense via AP)

WASHINGTON, August 28: The United States military struck back at the Islamic State on Saturday, bombing an IS member in Afghanistan less than 48 hours after a devastating suicide bombing claimed by the group killed as many as 169 Afghans and 13 American service members at the Kabul airport.

U.S. Central Command said the U.S. conducted a drone strike against an Islamic State member in Nangahar believed to be involved in planning attacks against the U.S. in Kabul. The strike killed one individual, and spokesman Navy Capt. William Urban said they knew of no civilian casualties.

It wasn’t clear if that individual was involved specifically in the Thursday suicide blast outside the gates of the Kabul airport, where crowds of Afghans were desperately trying to get in as part of the ongoing evacuation from the country after the Taliban’s rapid takeover.

The airstrike fulfilled a vow President Joe Biden made to the nation Thursday when he said the perpetrators of the attack would not be able to hide. “We will hunt you down and make you pay,” he said. Pentagon leaders told reporters Friday that they were prepared for whatever retaliatory action the president ordered.

“We have options there right now,” said Maj. Gen. Hank Taylor of the Pentagon’s Joint Staff.

WASHINGTON: By promising to strike the extremists who killed 13 Americans and dozens of Afghans, President Joe Biden now confronts the reality of finding and targeting them in an unstable country without U.S. military and intelligence teams on the ground and no help from a friendly government in Kabul.

“They advised the president and vice president that another terror attack in Kabul is likely, but that they are taking maximum force protection measures at the Kabul airport,” Psaki said, echoing what the Pentagon has been saying since the bombing Thursday at Kabul airport that pushed the White House deeper into crisis over a chaotic and deadly conclusion to a war that began nearly 20 years ago.

Late Friday, the State Department again urged Americans to stay away from airport gates, including “the New Ministry of Interior gate.”

Few new details about the attack emerged a day later, but the Pentagon corrected its initial report that there had been suicide bombings at two locations. It said there was just one — at or near the Abbey Gate, followed by gunfire. The initial report of a second bombing at the nearby Baron Hotel proved to be false, said Maj. Gen. Hank Taylor of the Pentagon’s Joint Staff; he attributed the mistake to initial confusion.

Based on a preliminary assessment, U.S. officials believe the suicide vest used in the attack, which killed at least 169 Afghans in addition to the 13 Americans, carried about 25 pounds of explosives and was loaded with shrapnel, a U.S. official said Friday. A suicide bomb typically carries five to 10 pounds of explosives, said the official, who spoke on condition of anonymity to discuss preliminary assessments of the bombing.

Biden said in an address to the nation after the attack that the perpetrators cannot hide, and he vowed to strike back at the Islamic State group’s Afghanistan affiliate. “We will hunt you down and make you pay,” he said.

Taylor said the Pentagon will be prepared.

“We have options there right now” to enable whatever retaliatory action may be ordered, Taylor said.

Beyond the prospect of a one-time retaliatory strike to answer Thursday’s suicide bombing, Biden faces the problem of containing over the longer term an array of potential extremist threats based in Afghanistan.

In an Oval Office appearance Friday, Biden again expressed his condolences to victims of the attack. The return home of U.S. military members’ remains in coming days will provide painful and poignant reminders not just of the devastation at the Kabul airport but also of the costly way the war is ending. More than 2,400 U.S. service members died in the war and tens of thousands were injured over the past two decades.

The Marine Corps said 11 of the 13 Americans killed were Marines. One was a Navy sailor and one an Army soldier. Their names have not been released pending notification of their families, a sometimes-lengthy process that Pentagon spokesman John Kirby said involves “difficult conversations.”

Still, sorrowful details of those killed were starting to emerge. One Marine from Wyoming was on his first tour in Afghanistan and his wife is expecting a baby in three weeks; another was a 20-year-old man from Missouri whose father was devastated by the loss. A third, a 20-year-old from Texas, had joined the armed services out of high school.

Biden ordered U.S. flags to half-staff across the country in honor of the 13.

They were the first U.S. service members killed in Afghanistan since February 2020, the month the Trump administration struck an agreement with the Taliban that called for the militant group to halt attacks on Americans in exchange for a U.S. agreement to remove all American troops and contractors by May 2021. Biden announced in April that he would have all forces out by September.

Psaki said the next few days of the mission to evacuate Americans and others, including vulnerable Afghans fleeing Taliban rule, “will be the most dangerous period to date.” Biden has set Tuesday as the deadline for completing the airlift.

The White House said that as of Friday morning, about 12,500 people were airlifted from Kabul in the last 24 hours on U.S. and coalition aircraft; in the 12 hours that followed, another 4,200 people were evacuated. Psaki said about 300 Americans had departed and the State Department was working with about 500 more who want to leave. The administration has said it intends to push on and complete the airlift despite the terror threats.

“We certainly are prepared and would expect future attempts,” Kirby said. He declined to describe details of any additional security measures being taken, including those implemented by the Taliban, around the airport gates and perimeter. He said there were fewer people in and around the gates Friday.

Biden promised that the Islamic extremist perpetrators would made to “pay” for their actions, and Psaki on Friday said this was his way of saying “he does not want them to live on the earth anymore.”

Effective retribution, however, will be harder with fewer U.S. intelligence assets and no military presence in Afghanistan.

Emily Harding, a former CIA analyst and deputy staff director for the Senate Intelligence Committee, said she doubted Biden’s assurances that the United States will be able to monitor and strike terror threats from beyond Afghanistan’s borders. The Pentagon also insists this so-called “over the horizon” capability, which includes surveillance and strike aircraft based in the Persian Gulf area, will be effective.

Harding says she cringes when she hears Biden restate this assurance.

“It’s way too rosy an assessment of what’s possible,” said Harding, now a senior fellow at the Center for Strategic and International Studies.

The U.S. is still scrambling to establish bases closer to Afghanistan while at the same time removing people who have worked with the CIA and other intelligence agencies in the country, former officials have said.

The IS affiliate in Afghanistan has carried out many attacks on civilian targets in the country in recent years. It is more radical than the Taliban, who seized power less than two weeks ago and are an enemy of IS. The most heralded American attack on IS came in April 2017 when the U.S. dropped the largest conventional bomb in its arsenal on an IS cave and tunnel complex. The group more recently is believed to have concentrated in urban areas, which could complicate U.S. efforts to target them without harming civilians.

Gen. Frank McKenzie, the U.S. Central Command chief who is overseeing the airlift and is responsible for all U.S. military operations in the greater Middle East, told reporters Thursday that the first step will be determining with confidence who carried out the attacks.

“Yes, if we can find who is associated with this we will go after them,” he said. “We’ve been clear all along that we retain the right to operate against ISIS in Afghanistan, and we are working very hard right now to determine attribution, to determine who is associated with this cowardly attack, and we are prepared to take action against them — 24/7, we are looking for them.”

Over 50 IS militants killed by U.S.-led airstrikes in eastern Syria

DAMASCUS, March 29: At least 50 Islamic State (IS) militants were killed Thursday by U.S.-led airstrikes on a caves area... Read More...

The Trump administration has ordered the military to start withdrawing around 7,000 troops from Afghanistan – an abrupt shift in... Read More...