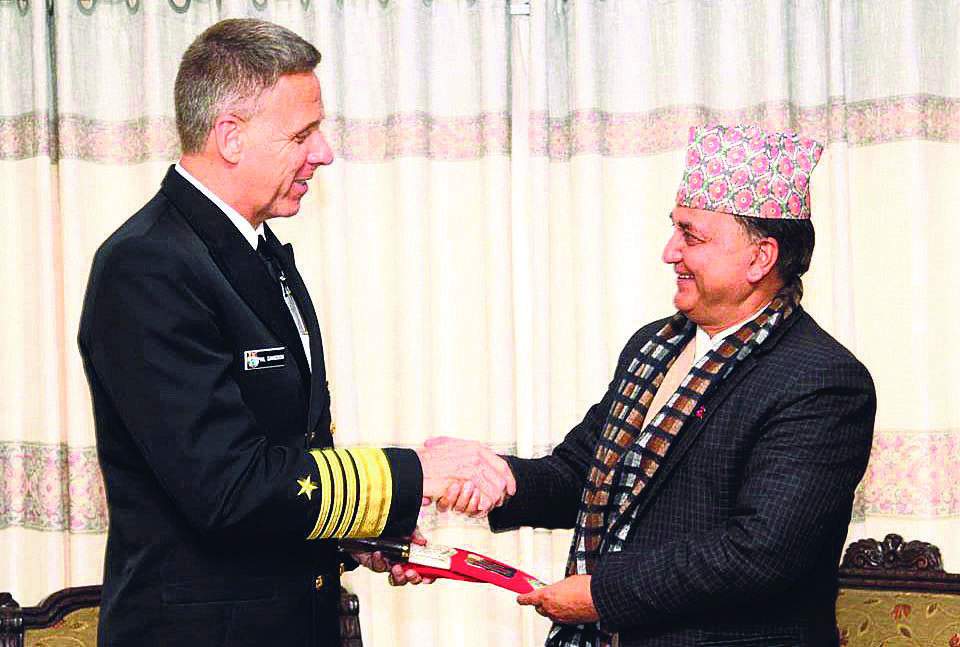 KATHMANDU, Jan 12: Visiting commander of the US Indo-Pacific Command, Admiral Philip S Davidson, has urged the Nepal government to resolve legal hurdles at the earliest to importing arms from the US for Nepali soldiers deployed in conflict countries under UN peacekeeping missions.

In a meeting with Deputy Prime Minister and Defense Minister Ishwar Pokharel at the latter’s office at Singha Durbar, Admiral Davidson stressed timely implementation of an arms purchase deal. While both countries have agreed to the purchase of 6,000 plus M-16 rifles and other arms, Nepal’s procurement laws have complicated matters.

The US wants 100 percent payment for the arms cleared before the supply of weapons whereas Nepal’s law does not allow payment clearance at a single go. The payment needs to be on an installment basis.
At the bilateral meeting, Pokharel assured the US admiral that the government was working to ease the procurement complexities to seal the arms deals. “We are working to ease the process. It will happen soon,” an informed source quoted the minister as saying.

Nepal is under pressure to procure the arms as the UN has tightened the requirement for countries contributing peace-keepers to equip them with modern arms and ammunition.

During his meeting with senior political leaders and defense officials, Davidson expressed concern for peace in the Indo-Pacific region and vowed to extend support to Nepal. He renewed a commitment to provide two sky truck military aircraft to the Nepal Army for use in relief and rescue operations during disasters, and to provide support in upgrading the peace-keeping training center.

Two sky trucks will be provided without further delay but it will take some time to provide two additional such trucks, according to the sources.

KATHMANDU, Jan 4: The trailer of ‘BhurBhura Rahar’ released on Thursday. The movie is based on ‘Sakhya Nach,’ a form... Read More...