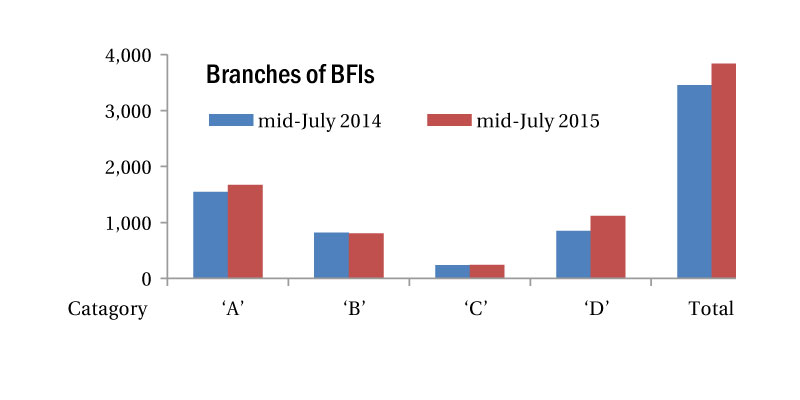 KATHMANDU, July 8: Growing concentration of branch offices of bank and financial institutions (BFIs) in urban and semi-urban areas is making the government's objective of financial inclusiveness and access to finance for all unachievable.

BFIs, which are rushing to open their offices in urban and semi-urban areas where geographical access is relatively easy, are hesitating to expand their services in rural areas, citing higher operating cost.

According to Nepal Rastra Bank (NRB), BFIs, along with microfinance development banks, have a total of 3,838 branch offices across the country as of mid-July 2015, up from 3,456 in the same period last year.

Despite the central bank's continuous efforts to increase the outreach of financial services in remote areas, the result is still not satisfactory in terms of expansion of branch offices in far-western development region. The remote, which has many remote settlements, have only
123 branch offices. Bajura and Mugu have only two bank branch offices each.

The budget for Fiscal Year 2016/17 states that 'Bank Account for All Nepali' program will be launched as a campaign to encourage people to open bank accounts. “An arrangement will be made through the central bank to open zero balance bank account," the budget speech reads.

As the NRB is preparing to bring monetary policy for 2016/17 next week, it is expected that the central bank would announce programs to promote financial inclusion and 'zero balance bank account'.

Bankers say that microfinance institutions should be nudged to serve in rural areas. "The government, in its budget, has announced to open bank account for all its citizens. The central bank should do a mapping to find out where banking services are available and where not. If the central bank says that there should be a branch of microfinance in every VDCs, as commercial bank might not be logical, it is possible within two or three years," Bhuvan Dahal, CEO of Sanima Bank Ltd, said.

KATHMANDU, July 16: The level of financial inclusion in Nepal is better with 61 percent adults having access to formal... Read More...