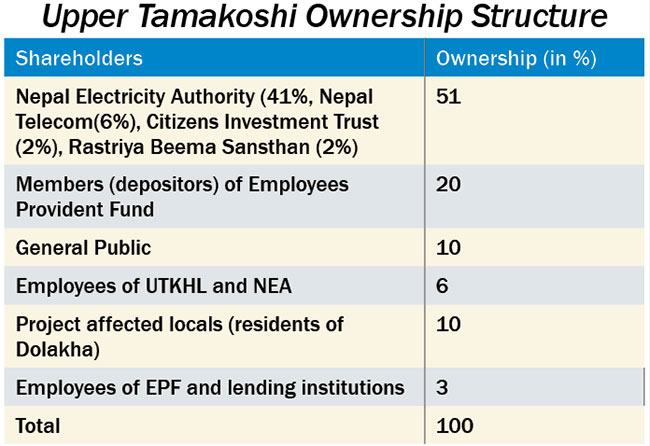 KATHMANDU, June 10: Upper Tamakoshi Hydropower Ltd has received approval from the Securities Board of Nepal (Sebon) to float its primary shares to the affected communities in the project area and the general public.

With the Sebon's approval last week, the hydropower company, promoted by the Nepal Electricity Authority (NEA) and three other public entities, will issue its shares as part of its initial public offering (IPO).

The company will offer 10.59 million units of shares, of which the general public will be able to subscribe 15.89 million units. The shares will be up for sale at the par value of Rs 100 each.

Residents of Dolakha district can apply for a minimum of 30 units of share and a maximum of 300 units. The minimum units of share for the general public are 10 with no upper limit.

“We have received the approval from the Sebon to float primary shares to the residents of Dolakha and the general public,” Roshan Jung Karki, a deputy manager at the Citizens Investment Trust—the issue manager of the Upper Tamakoshi—told Republica.

“First, we plan to complete the issuance and allotment of the shares to the residents of Dolakha. Only then the shares for the general public will be floated for subscription,” he added.

According to Karki, the issue manager is planning to float the shares to the project-affected locals by the second week of Asadh as per the Nepali calendar (last week of June).

The company has already floated its 24 percent shares to the contributors in the Employees Provident Fund (EPF), the NEA and employees of these companies and financing companies.

The NEA along with Nepal Telecom (NT), CIT and Rastriya Beema Sansthan (RBS) hold a total of 51 percent of the shares of the Upper Tamakoshi. The NEA has 41 percent stakes, NT has 6 percent and CIT and RBS each hold 2 percent stakes in the hydropower company.

The first plant of the 456-MW hydroelectric project is expected to generate electricity from January 2019 while the rest of five other plants will come into operation by June 2019. It is currently regarded a national priority project and when it is completed, it will be the largest hydroelectric plant in Nepal. The project is entirely financed by domestic financial institutions and companies with an estimated cost of over Rs 45 billion.

KATHMANDU, Nov 24: Securities Board of Nepal (Sebon) has approved a proposal to auction off 6.16 million units of promoter... Read More...

KATHMANDU, 24: Securities Board of Nepal (Sebon) has approved a proposal to auction off 6.16 million units of promoter shares... Read More...

KATHMANDU, April 3: As many as 18 companies have sought the approval of the Securities Board of Nepal (Sebon) to float... Read More...