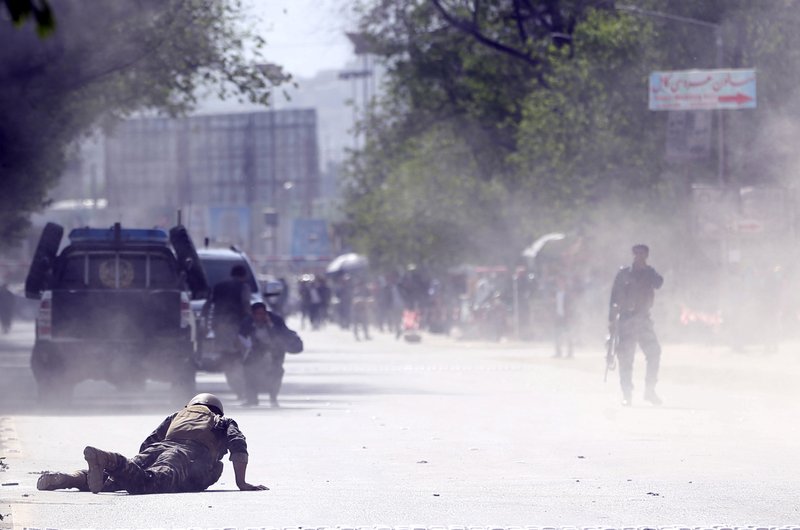 A security force and a civilian lie low at the site of a suicide attack after the second bombing in Kabul, Afghanistan, Monday, April 30, 2018. A coordinated double suicide bombing hit central Kabul on Monday morning, (AP Photo/Massoud Hossaini)

At least 45 people were wounded in the twin attacks, according to Kabul police spokesman, Hashmat Stanekzai, who also added that four policemen were among those killed.

The attack was the latest in a relentless string of deadly large-scale bombings and assaults that have struck in Kabul and elsewhere in Afghanistan so far this year. No one immediately claimed responsibility for Monday’s attack, but both Taliban and Islamic State group are active and have repeatedly claimed attacks in Kabul.

The suicide blasts took place in the central Shash Darak area, which is home to the NATO headquarters and a number of embassies in Afghanistan.

Stanekzai, the police spokesman, said the first suicide bomber was on a motor bike. The second explosion was meant to hit those rushing to the scene of the attack to help the victims of the first blast.

He said the second attacker was on foot, in a crowd of reporters that had rushed to the scene of the first attack, pretending to be one of the media. He then detonated his explosives while still among the reporters, the spokesman said, intentionally targeting journalists.

Agence France-Presse reported that the news agency’s chief photographer in Kabul, Shah Marai, was among those killed. AFP said Marai died in a blast that struck a group of journalists who had rushed to the scene of the earlier suicide attack in Kabul.

Kabul chief of police Dawood Amin said the area of Kabul that was targeted, which includes many foreign offices, was quickly sealed off and authorities were investigating. Mohammad Mousa Zahir, director of Wazir Akbarkhan Hospital, said several people suffering injuries from the blasts were being treated at the hospital.

The local Islamic State group affiliate and the more firmly established Taliban carry out regular attacks around the country, with the Taliban usually targeting the government and security forces and IS targeting members of the country’s the Shiite minority, whom the affiliate perceives as apostates. Large-scale attacks by the Taliban and the Islamic State group have also hit the Afghan capital, the seat of Afghan President Ashraf Ghani’s government.

The relentless underscore the struggles that Afghan security forces have faced to reign in the militant groups since the United States and NATO concluded their combat mission at the end of 2014. Both groups want to establish strict Islamic rule in Afghanistan.

Last week, an Islamic State suicide bomber attacked a voter registration center in Kabul, killing 60 people and wounding at least 130 others. There were 22 women and eight children among the fatalities.

And the month before, an IS suicide bomber targeted a Shiite shrine in Kabul where people had gathered celebrating the Persian new year. That attack killed 31 people and wounded 65 others.

New govt in next few days, claims Dahal
23 hours ago

IN PICS: Biska Jatra kicks off in Bhaktapur
22 hours ago

19 injured on first day of Bisket Jatra
6 hours ago

Six houses gutted in fire in Kalikot
56 minutes ago