KATHMANDU, July 14: At least 60 people have been confirmed killed and 26 others are missing following landslides and flooding triggered by incessant monsoon rain across the country. With the downpours now shifting toward the south, monsoon which had been in full swing since Friday has gradually decreased today.

The death toll rose to 60, according to the latest update issued by Nepal Police on Sunday afternoon.

As many as 24 are missing in landslides and floods and 38 have been receiving treatment at various hospitals and health centers according to the latest update released by Nepal Police.

Likewise, one thousand four hundred 44 people have been rescued from the natural catastrophe.

According to Meteorological Forecasting Division, as the monsoon trough starts moving towards the south, India will see active monsoon.

Widespread rain from light to moderate scale with general clouds is expected throughout the country today with the chance of heavy rain at one or two places. Rain is predicted at few places across the country on Monday. 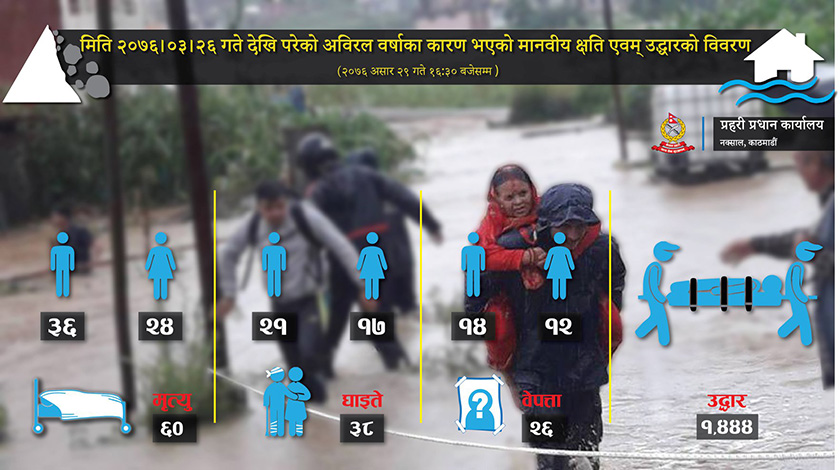 KATHMANDU, July 18: As many as 90 people so far lost their lives in landslide, flood and inundation across the... Read More...

Where are Sino-Indian relations heading?
22 hours ago

85 dead, 46 missing due to monsoon-induced disasters in Nepal
11 hours ago

Nepal Oil Corporation projects Rs 11 billion in profits, up by 26% this fiscal year
20 hours ago

85 dead, 46 missing due to monsoon-induced disasters in Nepal
11 hours ago

Nepal Oil Corporation projects Rs 11 billion in profits, up by 26% this fiscal year
20 hours ago