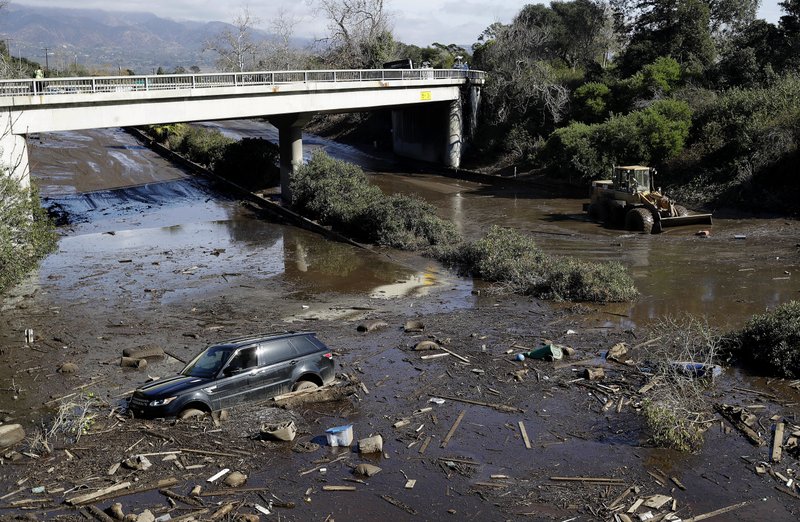 MONTECITO, Jan 11: Anxious family members awaited word on loved ones Wednesday as rescue crews searched for more than a dozen people missing after mudslides in Southern California destroyed an estimated 100 houses, swept away cars and left at least 17 victims dead.

“It’s just waiting and not knowing, and the more I haven’t heard from them — we have to find them,” said Kelly Weimer, whose elderly parents’ home was wrecked by the torrent of mud, trees and boulders that flowed down a fire-scarred mountain and slammed into the coastal town of Montecito in Santa Barbara County early Tuesday.

The drenching storm that triggered the disaster had cleared out, giving way to sunny skies, as hundreds of searchers carefully combed a landscape strewn with hazards.

“We’ve gotten multiple reports of rescuers falling through manholes that were covered with mud, swimming pools that were covered up with mud,” said Anthony Buzzerio, a Los Angeles County fire battalion chief. “The mud is acting like a candy shell on ice cream. It’s crusty on top but soft underneath, so we’re having to be very careful.”

Buzzerio led a team of 14 firefighters and six dogs in thick debris. They used long-handled tools to search the muck in the painstaking task.

A dozen people were hospitalized at Santa Barbara Cottage Hospital and four of them were in critical condition, Dr. Brett Wilson said.

“Most injuries we saw were related to fast-moving debris,” Wilson said. “You can’t even fathom what these poor patients went through to finally make their way to the emergency department.”

Some 500 firefighters and other rescue workers were searching debris spread across a wide swath of Montecito, a wealthy enclave of about 9,000 people northwest of Los Angeles that is home to such celebrities as Oprah Winfrey, Rob Lowe and Ellen DeGeneres.

Helicopters were used to hoist more than 50 people to safety from roofs, where they scrambled to escape the mud or because debris had blocked roads and left them stranded.

At one point, a Coast Guard helicopter rescued a family of five and their two dogs. Video shot from the hovering chopper showed a house surrounded by muck and debris as a mother, muddy from the waist down, handed her infant to two rescuers on the roof and then got help onto it. She and her newborn were hoisted to safety, followed by the rest of the family.

Weimer’s missing parents, Jim and Alice Mitchell, didn’t heed a voluntary evacuation warning and stayed home Monday to celebrate her father’s 89th birthday. She hoped to find them in a shelter or hospital.

“They’re an adorable couple, and they were in love with their house. That’s their forever home,” Weimer said.

People in Montecito had counted themselves lucky last month after the biggest wildfire in California history spared the town. But it was the fire that led to the mudslide, by burning away vegetation.

“We totally thought we were out of the woods,” said Jennifer Markham, whose home escaped damage in both disasters. “I was frozen yesterday morning thinking, ‘This is a million times worse than that fire ever was.’”

Only an estimated 10 to 15 percent of residents fled when ordered and much of the damage occurred where evacuations were voluntary.

Marco Farrell, a real estate agent, cited “evacuation fatigue” as his reason not to leave — a decision he wouldn’t make next time. He woke to the sound of pounding rain early Tuesday and went outside to investigate.

He was two blocks from home when he heard a rumble that he realized was the mudslide he feared.

“I ran as fast I could and yelled, ‘Flash flood!’ as I passed neighbors’ homes,” he said.

Farrell warned his parents inside, and within a minute, a boulder plowed through the kitchen door. The mud flow went through the home and burst through a backdoor.

Farrell planned to float his elderly parents to a hillside on a surfboard, but it was unnecessary. The mud never got above their thighs and after about an hour of huddling in a hallway, he led his folks and dog outside where a passing fire truck took them to safety.

The flow was so powerful it swept several homes off their foundations, crushed others and wrapped cars around trees. At least two unrecognizably mangled cars were carried like driftwood all the way to the beach, where they were partly covered in seaweed.

In Montecito, heavy debris still covered a stretch U.S. Highway 101, closing the main link between Ventura and Santa Barbara for 30 miles. It was not expected to be open until Monday.

Another storm-related death was reported in Northern California, where a man was killed when his car was apparently struck by falling rocks in a landslide Tuesday evening in Napa County.