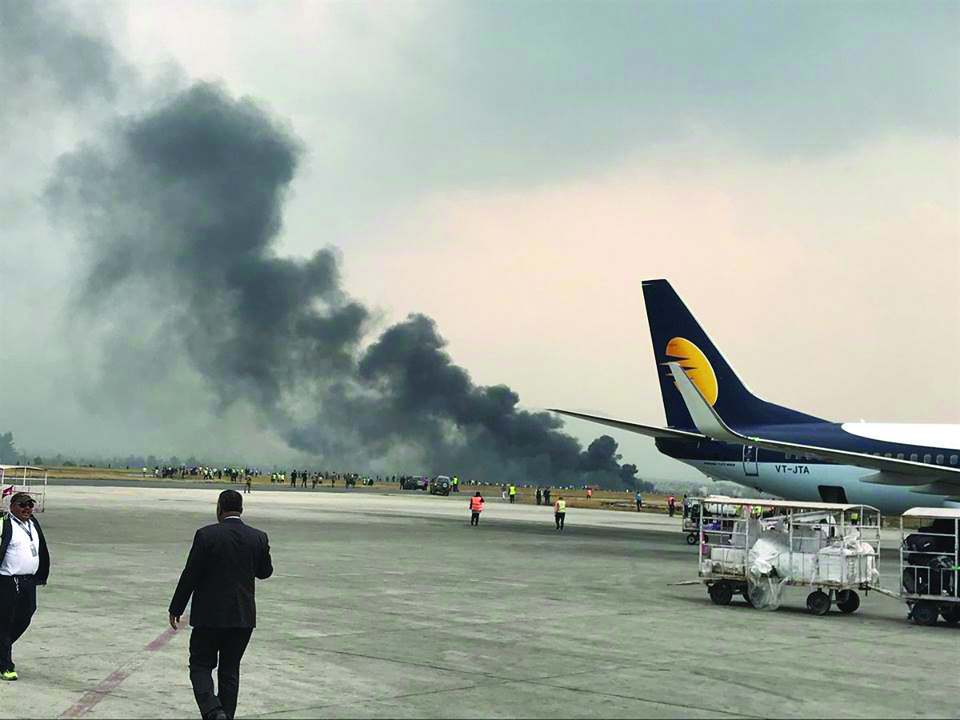 The author is a Pilot in Himalaya Airlines Pvt Ltd
news@myrepublica.com

The official report on the US-Bangla plane crash is out. We all have read the document, which points fingers at the pilot as well as the ground staff at Tribhuvan International Airport (TIA) for the crash that claimed 51 lives. But there are several aspects to it. The report, like any such investigation in the past, looks at the symptoms and not the underlying causes.

To start off, let’s imagine the scene inside the cockpit of the US-Bangla flight. On the controls was this captain, who was a highly decorated veteran with lots of flying experience and to his right was the first officer, a novice who’d barely had few hundred hours of flying time. When the plane returned to Dhaka, the captain would have to submit an assessment of the first officer’s skill, as she was under training. This high-stake assessment would determine the FO’s career prospects. With so much weight and power with the captain, the FO could not utter a word in ‘disrespect’, as offending the pilot could cost her job. When the captain started talking about his personal issues on the cockpit, it would take incredible strength and guts on the part of the FO to tell him to focus on the flight. She did not dare say, “Captain, shall we talk about this on the ground?” or “Captain, let’s focus on work.”

Numerous studies on air traffic accidents across the world have talked about the ‘cockpit culture’—how crewmembers interact with one another and how power relation impacts decision-making. The theory is best described as ‘high power distance index’ by Malcolm Gladwell in his book Outliers. On that US-Bangla flight, the power distance between the Bangladeshis, who are culturally similar to Nepalis, was so high that the FO couldn’t even act to save her own life.

Gladwell, in his book, says that Korean Airlines came up with an innovative idea to tackle the problem. It understood that a steep cockpit authority gradient drives pilots to lose their professionalism and breaks down their line of communication, all this through, ‘respect’ for the senior or in other words their inability to question the authority of their senior.

Korean Airlines changed its name to Korean Air and made English its official language. This change surprisingly made it easy for the first officers to address their captains, as the only word they needed to talk to their pilot was ‘you.’

Something similar needs to happen in this part of the world. It’s our culture that forces us to bow our heads in front of our teachers. It is our culture to speak softly before our seniors; it is our culture to assume that someone with more experience than us always does the right thing. Unfortunately, in aviation, such assumptions kill people.

After every aircraft accident that we witness in Nepal, we go through a vicious cycle of grief, anger and acceptance. When we heard the news and saw videos of the US-Bangla accident, we were down with grief. We felt so sorry for the lives lost; we lighted candles and shed tears. Right now we are in anger phase. We are angry that the captain didn’t do his work in a professional manner. We are angry that he smoked in the cockpit while crying, complaining and lying. But rest assured, we will accept this crash soon.

We will accept it as God's will and we will thank god for saving 20 lives. After sometime, we will forget the whole episode. Then suddenly, there will be another accident and we will go through the same cycle again.

That was what happened after the Tara Air and Agni Air crash in Jomsom, Sita Air in Kathmandu, Buddha Air in Kathmandu and many others. Although the US Bangla wasn’t our aircraft, it crashed on our soil killing Nepalis. We cannot go through this cycle again. We now need to look into the cultural reasons of plane crashes in Nepal.

It is time we emulate what Korean Air did to ensure the safety of its flight. It is time we train our first officers to ask questions and challenge wrong decisions taken by the captains and empower them to act freely without the chains of ‘respect.’ Unless we do that, we cannot make our skies safer.

The author is a Pilot in Himalaya Airlines Pvt Ltd

Provincial capital, a challenge for leaders

DANG, Aug 1: When Krishna Chaudhary of Bardiya got elected to the post of Provincial Assembly member, one of her major... Read More...