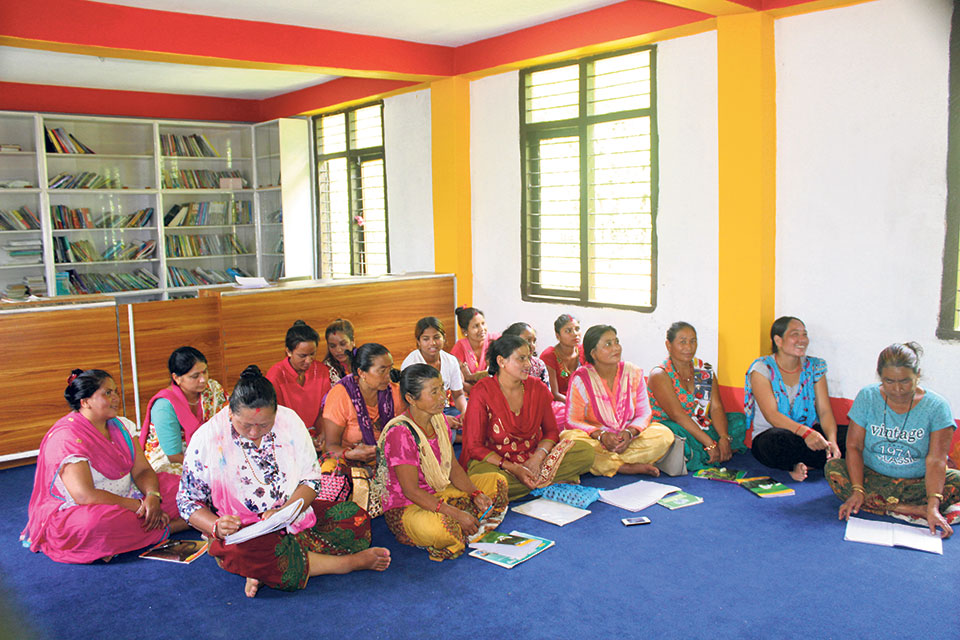 (The author is a section officer at the Ministry of Foreign Affairs, Nepal)
news@myrepublica.com

Although women are revered, loved and cared as mothers, spouses and sisters in our society, they still live a marginalized life formed by patriarchal norms and system. Women so deeply internalize the patriarchal values that they are unable to distinguish between their rights and duties as well as privileges and prejudices. Even women themselves torture other women if they fail to comply with those norms. However, women in this scientific era of globalization are not supposed to be so submissive and gullible, maintaining the status quo. Rather change is a must and women living both in rural and urban areas must strive for it, complementing each other; building on educational blocks as well as creating an enabling environment for empowerment.

Despite women being more educated, advanced and self-dependent these days, they are not able to make an impact. Women living in rural areas, in particular, not only lack socio-cultural and economic empowerment, but also decision-making capacity. Several pathetic stories of women’s financial illiteracy remain untold. As such, many Nepali rural women work hard in farms to grow some vegetables. But they can never sell them in the market since their husbands do so and ultimately become breadwinners. Thus, rural women survive unpaid job throughout their life without ever thinking that their efforts need to be valued. Similarly, women are no better than storekeepers lacking decision-making capacity on financial issues. For every single activity, women normally need guidance either from husbands or seniors.

Rural girls discontinue their study after they reach puberty due to the absence of toilets in rural schools and confine themselves in domestic chores. Expecting dowry from daughters-in-law, preferring baby boys to baby girls, forcing grown-up girls to early marriage fearing aging, young girls being trafficked for physical pleasures and witchcraft accusations are some examples of women being chained in the fetters of deep-rooted patriarchy. These untold stories are needed to be told for change and for raising awareness that women’s rights is human rights.

Empowerment and creating enabling environment for women empowerment are the proper solutions and education is the only tool to do so. Education will enhance women’s self-confidence, self-esteem, decision-making capacity and strengthen their sense of agency. Only empowered women will be able to contribute to the sustainable development and social prosperity.

Governments, international agencies, civil societies, non-governmental organizations and other stakeholders including men and women must work together for gender equality, justice and fairness.

Much has been done for gender equality at the international level. Every year at the United Nations, the Commission on the Status of Women convenes its important session dedicated to gender equality and women’s rights. International Women’s Day is observed on March 8 annually. Yet at the UN itself, only three women out of 72 have presided over the General Assembly till date. No woman has ever been trusted for the responsibility of Secretary General yet and only 20 percent of Permanent Representatives at the UN are female. On a positive note, the current UN Secretary-General has maintained gender parity in the appointment of senior posts ensuring the increased gender representation at the UN.

The UN focuses on the implementation of Sustainable Development Goal 5 for gender equality, SDG 4 for education for all and SDG 16 for justice for all including women and girls. International organizations like UN Women make best efforts to leave no one behind through the implementation of relevant SDGs on gender issues.

Nepal has made sincere efforts for its commitment to gender equality. Our democratic, inclusive and rights-based constitution guarantees for political representation of women at all levels, through mandatory provisions to have either President or Vice President from different sex or community. Either the Speaker or the Deputy-Speaker of the House of Representatives as well as either the Chair or the Vice-Chair of the National Assembly must be a woman. Our constitution also guarantees at least 33 percent seats in Federal Parliament, 34 percent in provincial parliaments and 40 percent seats in local bodies for women.

Nepal has been elected to the Convention on the Elimination of all Forms of Discrimination against Women (CEDAW) as well. Despite limited resources, government of Nepal has increased the allocation of gender-responsive budget up to 22.3 percent in the annual budget. Safe abortion services are provided free of cost in public health posts enabling women to exercise their reproductive health rights.

But these legal and policy frameworks are inadequate unless they are implemented practically. Women are still discriminated, and a large number of women are still unaware about the rights and privileges enshrined in the constitution. Untold stories of rural women need to be told and voiceless should get voice.

Measures like creating an enabling environment for empowerment through education, awareness-raising, information-sharing, capacity-building, facilitating access to technology, health-care and decent work, inculcating leadership and professional skills as well as boosting self-confidence for decision-making are essential. Ensuring political and economic independence for women is crucial to create sustainable economies benefiting society and humanity at large. After all, an inclusive and just society is a real foundation for a peaceful, prosperous and sustainable world.