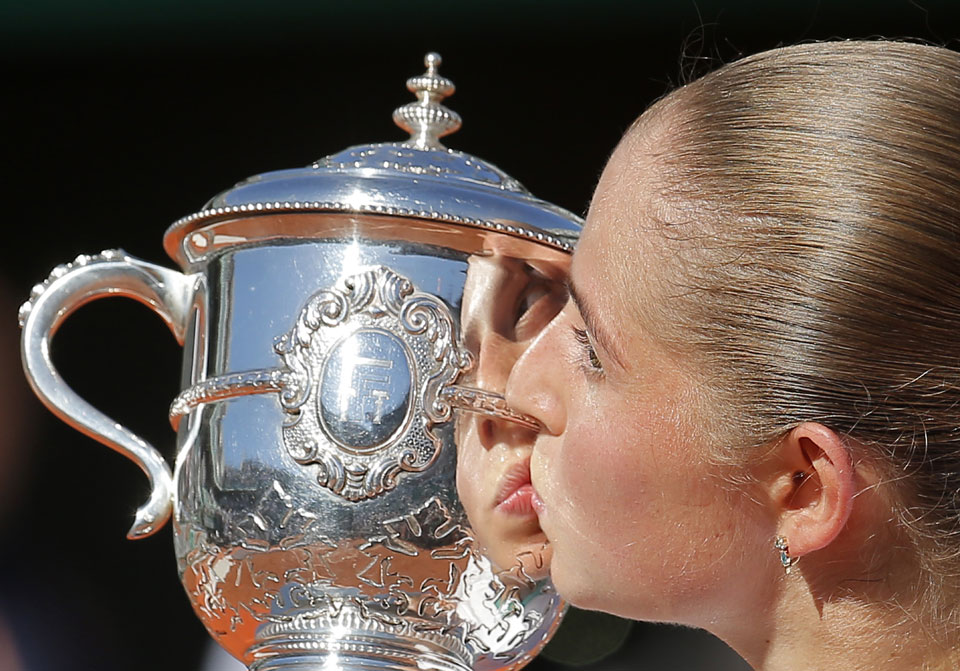 PARIS, June 11: Right from the start of the French Open final, Jelena Ostapenko made quite clear to anyone unfamiliar with her name, or her game, what she is all about.

She began what would become an enthralling, 2-hour encounter by breaking No. 3-seeded Simona Halep at love with a series of grip-it-and-rip-it shots , eliciting loud, appreciative gasps from spectators. So what if Ostapenko wound up dropping that set, then facing big deficits in the second and third? Ostapenko never wavered, using bold strokes and an unbending will to come back and stun Halep 4-6, 6-4, 6-3 for an unlikely championship at Roland Garros.

"Before the match, 5-10 minutes, I was a little bit nervous," said Ostapenko, the first Latvian to win a major. "But then, when I went on court, I felt quite free."

Halep, a 25-year-old from Romania, was the 2014 French Open runner-up and would have moved up to No. 1 in the WTA rankings if she had won Saturday. She appeared headed for a runaway victory when up a set and 3-0 in the second, plus holding three break points for the chance to lead 4-0. But Ostapenko would not go quietly, winning that game and the next three en route to forcing a third set.

"I felt a little bit nervous," said Ostapenko, the first woman since Jennifer Capriati in 2001 to win the French Open after losing the final's opening set. "But then I felt: 'I have nothing to lose, so I'm just going to enjoy the match and do my best.'"

She again summoned a veteran's resolve down 3-1 in the third set, taking the match's last five games and, fittingly, striking a pair of winners on the last two points.

"Enjoy, be happy, and keep it going," Halep told Ostapenko during the trophy ceremony , "because you're like a kid."

Sure is. Quite a precocious one.

Ostapenko was playing in only her eighth Grand Slam tournament and never had been past the third round before. Clay isn't even her preferred surface — she likes grass better, and won the Wimbledon junior title in 2014 — which made this two-week joyride even more unpredictable.

"Everybody knows she can play very good, but I think nobody expected (her) to (do) what she did," said Anabel Medina Garrigues, who began coaching Ostapenko in April.

Asked why Ostapenko never won a WTA Tour event until now, Medina Garrigues began answering, then interrupted herself after 10 words and laughed.

"I mean, I don't know," she said. "Actually, it's something I cannot understand. It's unbelievable."

The last woman to win her first tour-level title at a major was Barbara Jordan at the 1979 Australian Open. Not coincidentally, that was also the last time at any Grand Slam tournament that none of the women's quarterfinalists had previously won a major championship.

So Ostapenko stepped into the considerable opening created by the absences of Serena Williams (who is pregnant) and Sharapova (denied a wild card after a drug ban). Also missing was two-time major champ Victoria Azarenka, while No. 1 Angelique Kerber lost in the first round.

Ostapenko burst onto the scene with a brash brand of tennis. Accenting shots with high-pitched exhales, she likes points quick. The impatience of youth not only showed up in Ostapenko's play but also, occasionally, in her demeanor. When she'd miss, she would slap her thigh or crack her racket on the red clay or raise a palm as if to say, "What was up with that shot?"

Things went her way to the tune of 54 winners, a remarkably high total that was 46 more than the defensive-minded Halep. Ostapenko also made 54 unforced errors, to Halep's 10.

When Ostapenko is at her best, Halep's coach, Darren Cahill said, "You don't touch the ball. You become a spectator."

A telling statistic: Of the 33 points Halep won in the first set, only one came via a winner off her racket.

Still, there were plenty of entertaining points during the back-and-forth match between the disparate styles, played in a slight breeze with the temperature at about 80 degrees (above 25 Celsius) and with nary a cloud marking the azure sky.

But the difference on this day: Halep faded at the end of the second and third sets, while Ostapenko surged, bringing her mother — a tennis instructor who taught young Jelena how to play — to tears in the stands.

"I've been sick in the stomach with emotion," Halep said. "Maybe I was not ready to win it."

Ostapenko certainly was ready, sooner than even she could imagine.