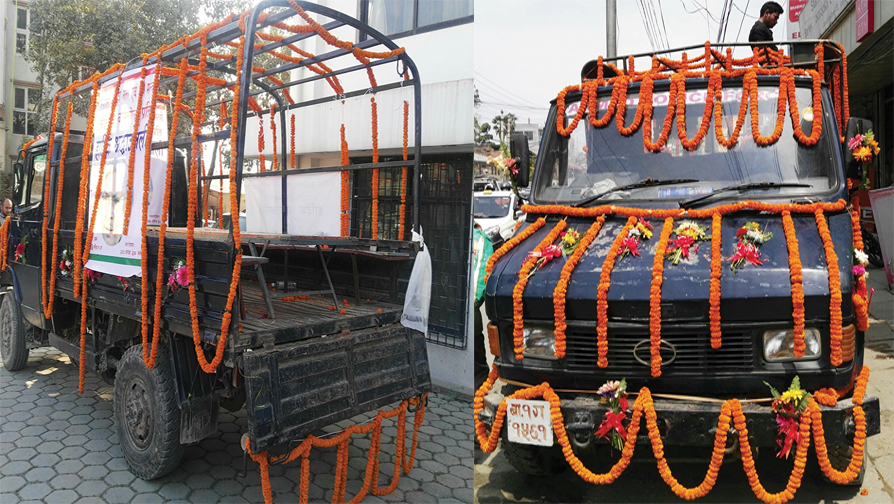 The ebullience of Dashain was still in the air when the news came that the Nepali Congress leader Chakra Prasad Bastola, 72, had left us. Ever since suffering a brain hemorrhage more than five years ago, his soul was almost a prisoner and its release had appeared to be merely a matter of time.  One suspects that if he had to choose the timing of his departure from this world, Chakra Dai would have certainly preferred the balmy weather of autumn in Kathmandu. Streets were almost quiet and the sky was clear when the freed passerine flew away toward its unknown destination.

Marigold blooms and chrysanthemum buds make the end of autumn a season of memories when personalities of the past come alive during cool and dark nights. Friedrich Nietzsche thought that autumn was more the season of soul than of nature. The two, however, aren’t always separable.

Had he heard the comment, Chakra Dai would have offered some counterpoint as was his wont. His favorite remark, whenever our paths crossed, “What you have said may be correct, but there is another side of the story.” In politics, an obsessive activity that presupposes clarity of purpose, few practitioners have the inclination to spare a thought for the alternative versions of reality.  He always had an explanation, a point of view or simply a casual remark that threw light on a subject from a different angle.

Lest the piece read like a eulogy, I must make it clear that despite the Dai honorific, I wasn’t close enough to understand his beliefs or fully appreciate his character. My relationship with him was ambivalent at best. I admired him because he was one of very few politicos with whom it was possible to discuss ideas rather than just events and personalities. He kept abreast of contemporary intellectual debates in the East and West coasts of the USA. He was well-informed about discussions being held at the India International Centre and other such venues of intellectual conversations in the neighborhood of Lodhi Gardens in New Delhi.

Contrary to Pradip Giri, another bookish politico in the higher echelons of Nepali Congress who continues to hold on to classic ideas of democracy and socialism with the fervor of a preacher, Chakra entertained seemingly sacrilegious views with complete openness. He was a democrat, but willing to debate whether majoritarian democracy without a leader ‘in the mold of Nehru’ could ever take root in Nepal. Few doubted his nationalist credentials, but he had little hesitation in admitting that closeness to India was sine qua non of Nepal’s foreign policy.  His attitude toward Madheshis or Janjatis, however, was as elitist as any other member of the Khas-Arya aristocracy.

He would sometimes admit that there weren’t enough Madheshis in the mainstream to create a sense of belongingness among inhabitants of the plains. However, the solution that he had in mind was far from revolutionary. He would suggest that competent Madheshis should be promoted in public life to strengthen national integration.

The intention of picking up winners from marginalized and externalized communities may have been benign, even generous, but the tone would invariably be condescending and implied as if people like him were the rightful givers and the status of Madheshis could never be more than that of grateful receivers.

Aspirations based on the illusion of entitlement that came with the claim of having been champions of democracy during its darkest hour—the 1960s and 1970s—perhaps made politicos of what can perhaps be termed the Banaras School in NC believe that they were the people of destiny and hence could do no wrong.

The idea of rational revolutionary is an oxymoron. Revolution is a romantic enterprise characterized by undiluted idealism and a passion to change one’s world, which is often antithetical to reason and logic of reward and punishment. However, it’s perhaps equally true that the prospect of appropriate prize is seldom outside the thought of even the most radical of all political activists.

In practical terms, Chakra’s achievements were remarkable. He was the Foreign Minister during the Narayanhiti Massacre and had to explain an event to the world that was unexplainable by its very nature. He had been an ambassador in New Delhi in early-1990s and had played some role in facilitating talks with the Maoists after the late-1990s. But his expectations were perhaps somewhat higher, which remained unfulfilled.

Till the later part of the last decade, when elections for Constituent Assembly appeared uncertain, he seemed to be under an impression that destiny had the premiership of the country in store for him. He wasn’t alone in harboring such illusions.

When the body wrapped in the flag and flowers lay below a makeshift canopy in the premises of NC headquarters in Sanepa, a hearse was ready close by for the cortege to proceed to the Arya Ghat. I may have been hallucinating, but the vehicle decked for Chakra’s last journey looked eerily similar to the one that was used for the funeral of Khum Bahadur Khadka who had died earlier in the year in March.

Almost contemporaries, Khadka was earthy, pragmatic and unlike Chakra, had no pretence of intellectualism. If Chakra’s claim to fame was his association with the plane hijacking case to raise funds for the Revolution, Khadka established his credentials by accompanying BP Koirala to Kathmandu in the same flight in the mid-1970s with clear instructions from GP Koirala to take the first bullet if it was fired at their Leader.

Chakra spent his last years in blissful semi-consciousness while Khadka had to endure the ignominy of being jailed in some corruption cases. Politics is strange business: It rewards some alleged murders and convicted criminals with premiership but prosecute others for petty crimes. Little wonder, an agonist earlier, Khadka had turned deeply religious toward the end of his life.

At one time or the other, almost every politico of the Banaras School in NC perhaps entertained the thought that they were destined for bigger things in life. Ambitions of Shailaja Acharya (1944 – 2009), the first female Deputy Prime Minister in the history of the country, had shot through the roof when GP Koirala had mentioned in passing that Nepal was ready for a lady as the head of government. Suffering from Alzheimer’s complications, the crusader against corruption spent her last days in anonymity. Shailaja and Chakra were too revolutionary to compromise but not radical enough to go against their own party and its leader.

While a revolutionary chasing an impossible dream is a romantic by definition, it’s possible to be a political radical and work for the gradual transformation of the system through a combination of extremist and reformist strategies of resistance and compromise. One of the reasons behind Ganesh Man Singh’s choice of Krishna Prasad Bhattarai over others to be the first Prime Minister after the restoration of parliamentary democracy in 1990 was that the descendent of the priestly family of House of Gorkha personified NC’s Kathmandu School of pragmatic politics.

Politicos of the Banaras School had little faith in political correctness. Khadka dealt with the PEON in Kathmandu with the blitheness characteristic of a war hero. Shailaja had little time and even less patience with dealmakers that made things go round and round in the corridors of Singh Durbar. Chakra had no hesitation in speaking out his doubts. There was no way complicity of foreign powers could be proven in the Narayanhiti Massacre or involvement of India in the Maoist insurgency could have been established in a credible manner. But that didn’t deter him from voicing his suspicions from public forums.

The contrast with circumspect statements emanating from politicos of the Kathmandu School is impossible to miss. Ramchandra Paudel once pointed fingers at Nirmal Niwas but demurred when it came to admitting that the Maoist leadership was operating from the Indian soil. Sher Bahadur Deuba’s infamous statement that he had received justice from the Gorkahli king will go down in history as one of the most brazen avowal of loyalty to an autocratic king by a democratic politician.

It is said of the authoritarian regimes that if one had survived, it was proof enough that one had compromised one’s principles. Chakra was one of the last pillars of Banaras School. Pradip Giri has been like a bridge connecting the two competing schools. Little wonder, these days he appears so forlorn. There is nothing to bridge in the party anymore as pragmatism reigns supreme. Ideology has left the BP Smriti Bhavan in Sanepa for good.

Myagdi district is self-sufficient in oxygen
21 hours ago