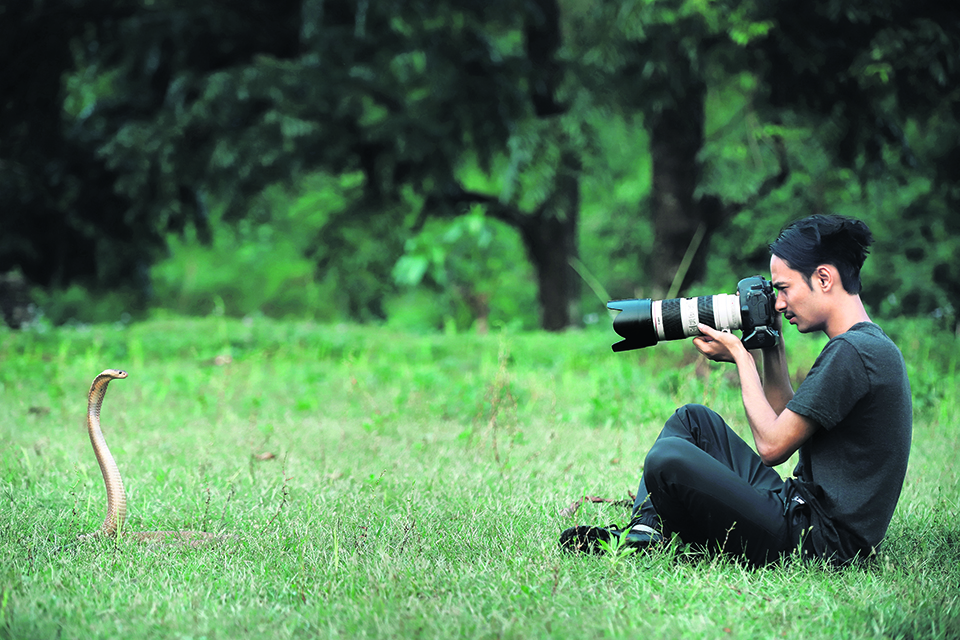 Rohit Giri can’t exactly say why he loves snakes. All he knows is that he’s been fascinated with them ever since he can remember. As a child he recalls trying to catch a glimpse of snakes that were sighted in his area. Later on, he gathered enough courage to approach them and soon started holding them. When he was 12 years old, he rescued his first snake and since then snake rescuing has been a fairly regular activity in his life.

Today, his daily schedule consists of attending college, going to a snake rescue mission (sometimes more than a couple of missions) and then reading up on serpents whenever he has some free time. Anyone who knows Rohit knows just how much he loves these creatures. He’s always seen whizzing around his town rescuing one snake after another and also advocates for their rights.

The first snake he rescued was a green colored one. It had sneaked into a neighbor’s garden and everyone was scurrying about trying to find ways to chase the snake away and, if possible, even kill it. He knew it was wrong and he couldn’t let that happen, not on his watch. Despite people warning him and telling him off, he took a long stick, captured the snake by the tail and let it go in a distant field. The snake, he later learned, was a Green Pit Viper, a highly venomous snake. “If a single moment of being courageous could save a life, I didn’t see why I shouldn’t do it again so I kept at it,” says Rohit.

Today, he not only volunteers on rescue missions he also encourages local communities to safely dispose off the trespassing creatures and shows them how they can do that. In Pokhara, which is where he lives, people ring him up every time there’s a snake sighting and he makes it a point to reach the place as soon as possible, equipped with his snake hook and bag. When he is not volunteering as a snake rescuer, he is at college, working towards a Biology degree to fulfill his lifelong dream of becoming an herbalist.

On regular days, he gets two to three rescue calls and he never hesitates to skip classes to go save a snake. Sometimes, his brother (who also shares his passions for snakes) accompanies him. Last summer, Rohit rescued more than a 100 snakes and this year too he has already saved around 60 snakes. Sometimes when he gets more calls than he can handle (as it often does, he admits) he rings up his friends from the Snake Conservatory Society in Pokhara and they go for the rescuing in his stead. Snake Conservatory Society is a newly formed non-governmental organization that Rohit is a member of. The NGO carries out local rescue operations and actively works to make people aware about how harmlessness most serpents that are commonly found actually are.
“80 percent of snakes are non venomous. And of the venomous kind only 21 percent are found in

Nepal. Snakes most people end up killing are not dangerous so I have taken it upon myself to educate people on this issue,” explains Rohit adding that he gets really upset when he hears instances of snakes being badly injured or worse killed on a daily basis. Everything he does is to ensure that incidents such as these don’t happen around him.

His love for snakes has also led him to pursue photography. His Instagram page (@lureyrohit) is followed by almost 12,000 users and most of his images feature close up shots of snakes. King Cobra or Common Rat Snake, there’s a dizzying variety of snakes on his page. People often take to calling him the “Snake Guy”, both in real life and on the internet.  Rohit stresses that his love for snakes is tied to how these creatures are generally feared. “The more people shy away from them and mistreat them, the more compassionate I feel towards them,” he says. “My hope is that my images breathe new life into the way people view them,” he writes under a shot of Common Bronzeback Tree Snake.

Studying and rescuing snakes have taken him to many places as well. He recalls a rescue operation that took him to Syangja and another one that took him to Ghandruk. He was also a part of a survey trip that took 96 days to complete and covered from Mechi to Karnali. The group Rohit traveled with was responsible for collecting data on the various types of snakes found in Nepal. Their search especially took them all around the Chure belt in the Tarai region.

The group would take walks or ride jeeps through national parks and jungles, often in the dead of the night in search of snakes. Upon sighting one, they took a picture, and made brief studies on its behavior. Sometimes they had to trap and capture the snakes as well. The late night wanderings were extremely dangerous, especially with wild animals roaming freely. On one occasion, they encountered an elephant and very nearly got trampled.

The work also entailed grading areas, speaking to the locals of the community about their unique species and going exploring late at night. This continued for nearly a 100 days. And there are scenes of nighttime that Rohit can never forget: Birds flying to their nests, the change in the colors of the sky, and snakes slithering back into their holes.

Even though Rohit is an expert at handling snakes there are times when his work has put him in great risk. Just recently, he spent four days under medical treatment recovering from an attack. A King Cobra spit some venom into his eyes while he was clicking its photos. But he admits that it was his own fault. “No matter how comfortable you are with them you should always maintain some distance. I moved too close to the cobra this time,” he says.

Everything Rohit knows about snakes is self-taught. From the internet and especially YouTube, he has taught himself all there is to know about snakes. He learnt to pick up his rescue tools by watching the many rescue missions uploaded on the video-sharing platform. “I have great love for these creatures. All I’m doing is making sure they don’t die just because they cross our paths and I’m also trying to encourage others to let them live,” he concludes.

When you see a snake
Do not panic. This is not basic advice. This is important advice. Snakes attack and bite when they are in a defensive mode. As long as you don’t show intentions of harming them, they will not attack. There are snake rescuers all over Nepal – in Kathmandu as well – ring them up or get in touch with the forest department in your town. If you’re trying to remove them from their immediate location, take a stick and very lightly poke them on the tail in the direction you want them to go. Never poke them on their heads. Ask people to move away as this will only make it feel threatened.

To prevent snakes encounters
Since snakes prefer open spaces, they only have two reasons for entering a building: They’re looking for shelter from rain or they detect certain animals to prey on. If your house is infested with mice, there is a greater possibility for snakes appearing in your home so take measures to chase the mice away. Manage bushes around your residence, especially in this rainy season. Seal the cracks and holes of your doors, you can also spray some kerosene around the doors – this will repel the snakes altogether. I always tell people to search for what snakes are found around their areas. Only then will you know which snake you are up against and how you can deal with it.

In case of bites
Do not move. If the snake is venomous, moving will only help spread the venom through the blood stream. Remember most snakes you will find are non-venomous so the most that will happen is you’ll get a wound. The bites hurt but not all of them will be venom laced. You will need medical attention no matter what so panicking will not help you at all. Get medical help immediately.

Nischhal Pradhan was like any other kid who liked taking pictures at family gatherings. He started out by clicking people... Read More...

BUTWAL, September 3: Butwal Sub-Metropolitan City has published a budget of Rs 1.633 billion for the Fiscal Year 2017/18. The municipal... Read More...