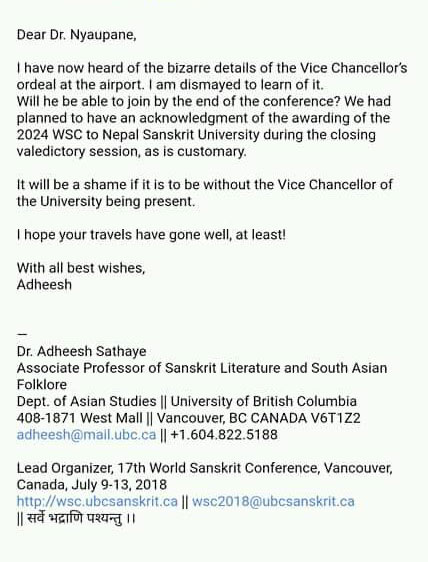 KATHMANDU, July 9: The University of British Colombia termed the absence of Kul Prasad Koirala in the conference a ‘shame’ and that they were ‘dismayed to learn of it.’

“I have now heard of the bizarre details of the Vice Chancellor’s ordeal at the airport. I am dismayed to learn of it,” an email by Dr Adheesh Sathaye, associate professor of Sanskrit Literature and South Asian Folklore reads. Sathaye however pinned hopes if the Vice Chancellor would be able to join by the end of the conference in an email to Dr. Kashi Nath Nyaupane, Director of Research Division, NSU. Nyaupane is attending the conference.

Home Minister Ram Bahadur Thapa said that Koirala was barred from flying to Canada because he had not sought prior permission from the government for the visit. Prof Koirala was flying to Vancouver, Canada to participate in the 17th World Congress of Sanskrit Language. He led a seven-member delegation and was one of the speakers of the conference.

Koirala accused the government of treating him as a criminal, just when he was to board the airplane on July 7. "They took me to the Prime Minister's Office and asked me to wait for an hour," Koirala said adding that he was later snapped back: "The Prime Minister is very busy in a meeting. Please leave and meet the PM tomorrow."

The Nepali Congress has taken strong exception to the government move to bar Prof Koirala from visiting Canada. Several NC leaders took to the social media to condemn the decision, terming it as “fascist terror” by the communist government.

Robbers loot jewelry and Rs 1.2 million in cash from IME at Taplejung
6 hours ago

About 20,000 observers to be deployed to monitor upcoming elections
2 hours ago