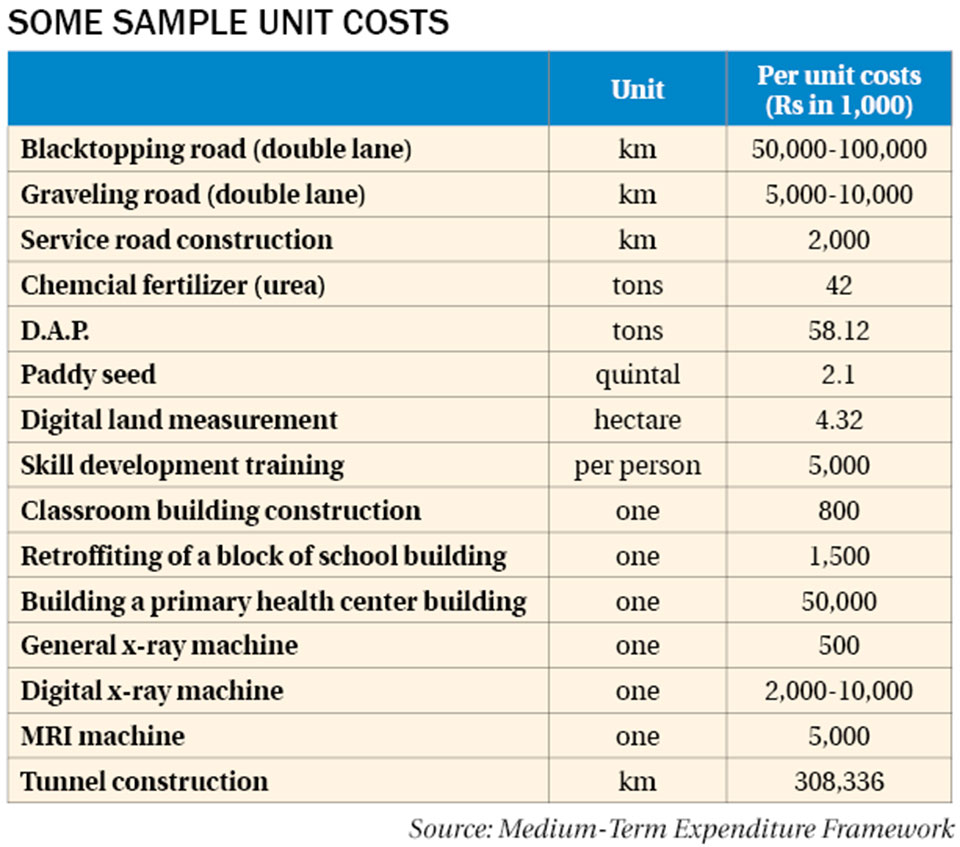 Listing of units costs expected to curb overpricing in procurement

KATHMANDU, June 10: The government has set per unit cost of all its spending for goods and services, from building a classroom of a public school to the price of a medicine provided to health posts to cure tapeworm.

The unit cost of building a classroom has been set at Rs 800,000 while the price of an albendazole tablet, used for curing tapeworm, is fixed at Rs 1.8. A normal X-ray machine costs Rs 500,000 while the price of a digital X-ray machine is set to be in a range between Rs 2-10 millions. The cost of blacktopping a double-lane road ranges from Rs 50 million to Rs 100 million depending on the locations and distance from business centers.

The unit costs of almost all major units of goods and services are listed in an annex of the Medium-Term Expenditure Framework (MTEF), a document that particularly makes projection of all government programs and plans along with amounts to be spent in the next three fiscal years including 2018/19. Minister for Finance Yuba Raj Khatiwada has already tabled the MTEF document in the parliament along with the budget document. The document will be endorsed and brought into implementation soon.Though there were some cost-counting practices in the past, they were scattered. This is the first time a synthesis of such unit costs has been given in a single document, which is now released for public information.

Officials of the National Planning Commission who prepared this document believe that such per unit costing will curb haphazard spending by the public entities as they will now need justifiable explanation to spend more than specified.

This will also be a binding document for the Ministry of Finance while allocating budgets to development projects. Budget allocation for projects of influential leaders may come into public scrutiny if it is not counted based on per unit costs set by the MTEF.

“It's now binding for all the public entities to follow the unit prices inserted in the annex of the MTEF. They will need to prepare estimated cost of any project or program before starting procurement,” said NPC's joint secretary Tirtha Dhakal, who was one of the team members to prepare the document.

The document has a 12-page annex list of the unit costs of each services and goods.

As per knowledgeable sources, most of the corruption occurs during the procurement process, when concerned officials bloat the estimated costs.

If this kind of unit costing comes into force, there will be uniformity in the pricing for even complex technology and , reducing the possibility of con.

Wide price gaps during the purchase of similar medical equipment by Bir Hospital, ala Institute of Health Sciences and Dhulikhel Hospital had drawn much controversy last year. The tender process was investigated and revised after there were claims of corruption and collusion in the procurement process.

The MTEF has been tabled in the parliament for discussion along with the budget documents provisioned by the Inter-Governmental Fiscal Arrangement Act 2017. It is regarded as an instrument to make the budgeting and planning process more pragmatic and focused on periodic plans and goals.

How trade spats increase poverty: the India-Nepal Episode of 2015
22 hours ago

The Failed Dalit Struggle
17 hours ago

Analysis: From game-changer to back-up: J&J's COVID vaccine struggles in Europe
11 hours ago

Three killed as landslide damages a house
18 hours ago