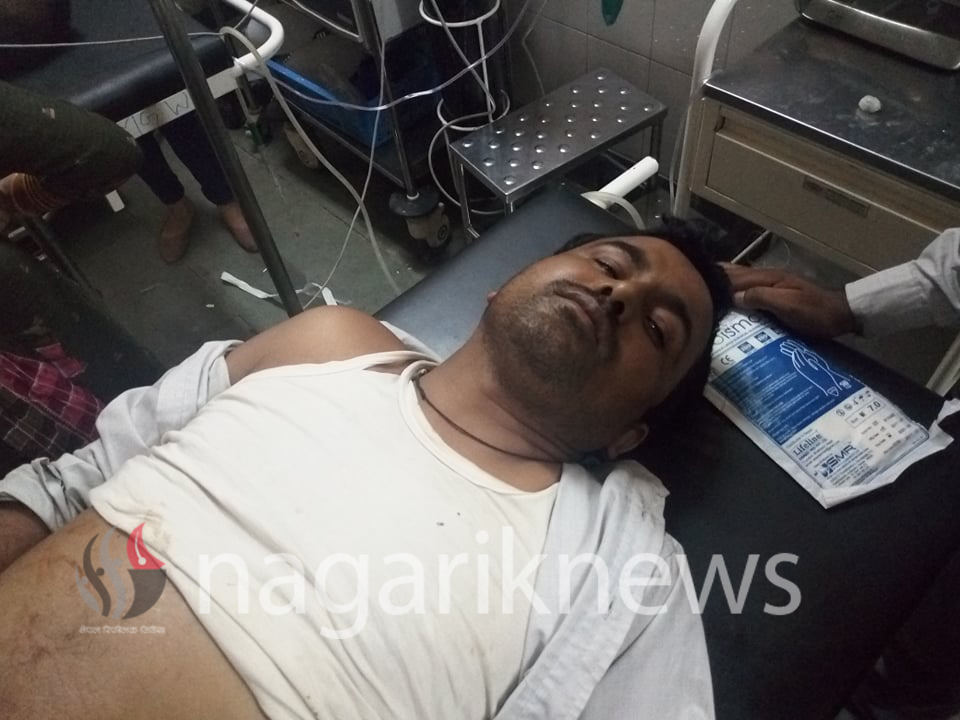 Shambhu Prasad Gachchhadar who was shot and injured by an unidentified gang of three.

DHARAN, May 27: Every month, Shambhu Prasad Gachchhadar ,35, a staffer at the Kathari-based Jiwan Bikash Micro-Finance Ltd in Morang, used to go to Dharan-4, 5 and Yangshila area of Morang to collect deposits from individuals as well as firms.

On Sunday, too, Gachchhadar left for the same areas on his motorcycle as usual. Dharan-4 and 5 fall are hills and are quite remote. It is difficult to find even a mobile phone network here. However, Gachchhadar never felt unsafe in these areas. After collecting money in Dharan, he headed for Lamichhanetar of Morang. Later, when he was returning to Dharan on his motorcycle, he was suddenly attacked by an unidentified group.

Three people who came on a motorcycle did not only loot the cash Gachchhadar was carrying but also shot him with a gun. Gachchhhadar received bullet injuries on his waist and left arm. Gachchhadar who was admitted to the emergency ward of BP Koirala Institute of Health Sciences (BPKIHS) is currently out of danger, according to the doctors involved in his treatment.

Deputy Superintendent of Police (DSP) Dhundiraj Neupane of the Area Police Office (APO), Dharan, and Superintendent of Police (SP) of the District Police Office (DPO), Sunsari, Rajan Adhikari had reached the site immediately after the incident.DSP Neupane informed Republica that preliminary investigation shows that a group of boys aged 20/22 had attacked Gachchhadar. "We have learnt that those youths had followed the victim in Lamichhanetar also but they didn't do anything there," said DSP Neupane, adding, "However, they got hold of him in a desolate area and shot at him to rob the money he was carrying."

Police recovered a shrapnel and white gloves from the incident site. No one witnessed the incident as Gachchhadar was attacked at Saunetar, Dharan-5, which is uninhabited. The victim has stated that two of his attackers were carrying pistols with them. "They pulled my bag and when I resisted, one of them hit me on the head. Later, they fired a bullet," said Gachhadar. Reportedly, they robbed Rs 400,000 from him.

DHARAN, May 26: An unidentified group shot an employee of Dharan-based microfinance and robbed of around Rs 400,000 on Sunday... Read More...

DHARAN, April 15: Even though the government had already relocated the families from Surdu Watershed area which is the prime source... Read More...