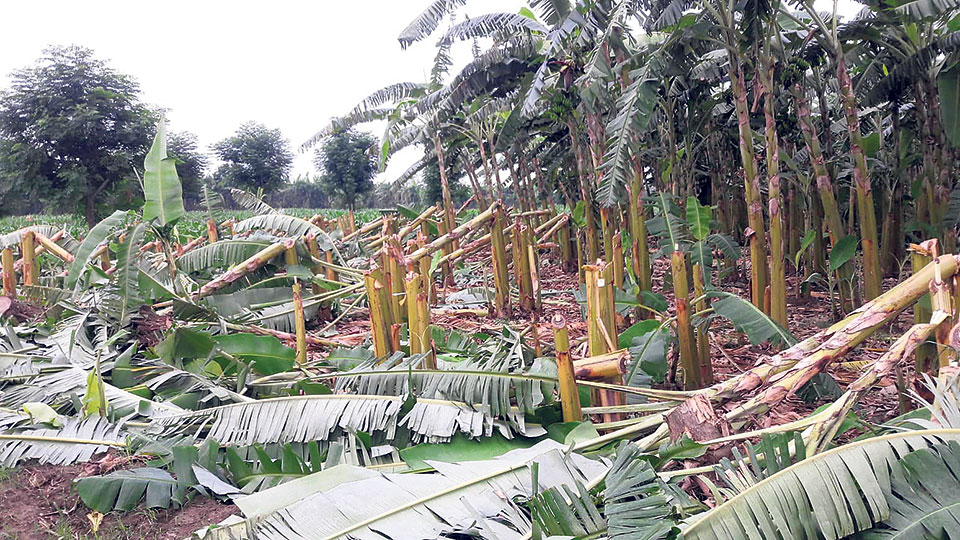 A banana plantation in Bhateni of Kalika-6 in Chitwan, which was damaged by an unidentified group on Monday night. Photo: Republica

CHITWAN, May 2: An unidentified group destroyed banana plantations of 12 farmers in Bhateni in Kalika-6 of Chitwan district.

Bishnu Hari Panta, president of Chitwan Banana Producers Association, said that more than 3,000 banana plants were deliberately cut down by the group on Monday night.
Farm owned by Kopila Dahal has suffered the most. The group chopped down 1,200 plants from her farm. Similarly, the group cut down around 600 plans in the farm of Shova Bhatta and 300 plans in Jhalak Subedi's farm.

The group also cut down banana plants in farms of Navaraj Dhital, Shankar Amgai, Gopi Lamichhane, Lila Pangeni, Purna Bahadur Khadka, Devi Prashad Gotame, Dhruva Acharya, Govinda Dahal and Bhuminanda Dawadi, according to Panta. “It looks like a planned act. Nobody can cause such damage on a whim,” he added.

Chitwan is one of the largest producers of banana in the district. Eastern part of the Chitwan is considered as pocket area for banana farming.

A farmer earns around Rs 500 from a single plant. This means 12 farmers suffered a combined of around Rs 1.5 million.
Last week, police had arrested few people from Bhateni area while taking drugs. They have been suspected of destroying the banana farms.

Panta requested the authorities to take needful action against the culprits and provide compensation to farmers.

“We have drawn the attention of local representatives, administration and police toward the incident," Panta told Republica.

Farmers have also filed a case against the incident at the District Police Office, Chitwan

POKHARA, May 13: A bomb went off last night at the premises of the Barahi Higher Secondary School at the... Read More...