Unheard stories about the 'banner guy'

That is how anyone would typically describe 'Laxman Singh Khadka'— the banner guy or as he introduces himself as 'Khalasi' (conductor) of Nepal – when they first see him. 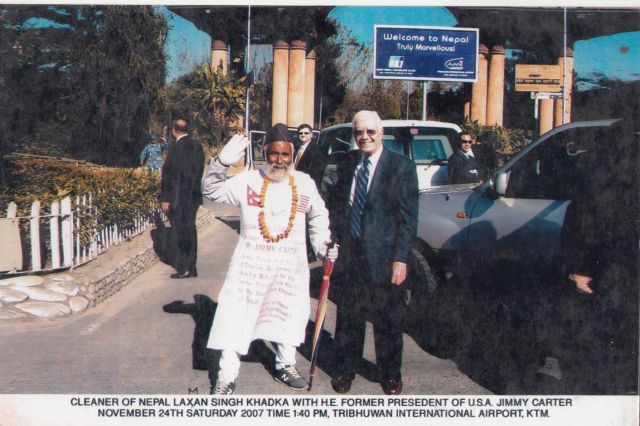 This 70-year-old person is a quite familiar figure amongst people living in Kathmandu. He is often seen walking around the streets in Kathmandu Valley and sometimes cleaning the statues of martyrs and the former kings placed at major intersections of the Valley's roads. He places banners with self-written slogans and often sweeps and cleans the Sahid Gate (Martyr's Gate) area in between Bhadrakali and Sundhara. He paints the statues and decorates them with garlands on the occasion of Martyr's Day that falls on Magh 16 (ie January 30 this year) every year.

As the Martyr's Day is just a few days away, Khadka has already started his preparations to mark the day.

“This is my way of expressing my love and respect toward Nepal. I do this because everyone else these days seem to be detached from events and happenings within the country and completely uninterested about the eminent history our country has,” Khadka explained his motivation behind these works. 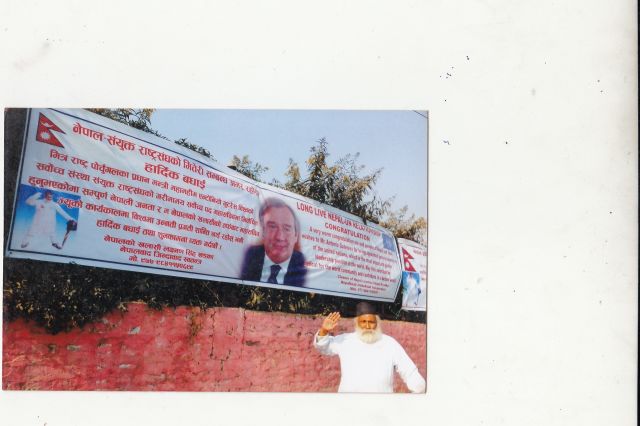 Khadka said he has been cleaning Sahid Gate area and painting the statues of martyrs since 2004. Once in 2005, Khadka was even accused of stealing inscriptions displayed at the gate, but police investigation later proved he was innocent.

“I know people will not believe this. But I have spent 1,000 nights at Sahid Gate looking after the statutes. I used to take a small stove to cook food and I would sleep there. This gave me peace,” claimed Khadka, whose life turned topsy-turvey after his youngest daughter committed suicide.

Before he could explain anything else about himself or what he has been doing since ages, Khadka paused to show his pictures from the very beginning of his journey as the banner guy. The first picture he showed was from about three decades ago — with his hair still dark and his body still youthful and lively. 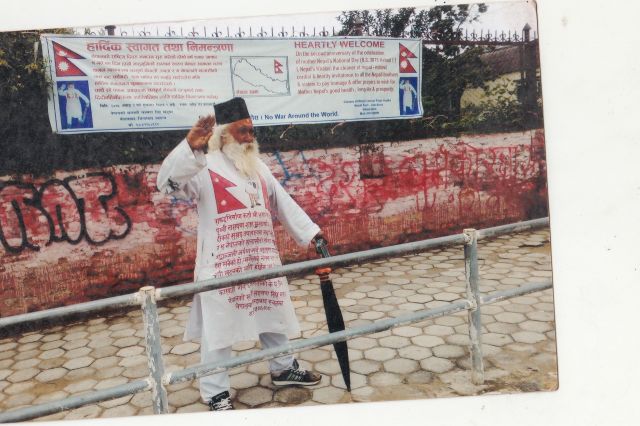 Each of his pictures were taken on different occasions, in different places and dressed in different shirts with different banners behind him; all that read his self-created slogans about various national or international events. But one thing was common in every picture he showed to this scribe: He could be seen striking the same pose, holding a salute gesture in every picture.

Asked behind the reasons of this typical posture, Khadka said a salute depicts an individual's respect toward something or someone.

“So, you can see me saluting in each of these pictures as it reflects my intense respect for my nation,” he said.

There were hardly any national days when he did not prepare banners and posted them in major thoroughfares of Kathmandu. But now he rarely does so because everything has turned quite expensive for him to afford.

“Things are turning out to be very expensive these days. I only make new banners on a very few important events. Or else I use the old ones,” he said.

It was back in 1986 when Khadka made such banners for the first time in his life. The first banner read, Merry Christmas and a Happy New Year, and was placed next to the American Embassy in Kathmandu.

“Once I saw people being happy looking at the words written in the banner, I realized this is something I would continue doing for my lifetime,” he said.

Khadka then started making banners with self-written words about national and international events. He was appreciated by people for his work as it was unique and something that was never done by others before.

Although some would criticize him and often pass negative comments saying his deeds were stupid and made no sense, Khadka was never deterred by the criticisms.

“I was always motivated in doing this because no one else had done this before and no one else does what I do even these days,” he said.

Khadka wears white shirt bearing Nepal's national flag and self-written slogans. He estimates that he has about 300 of such shirts, all with different slogans. And, these shirts are not sponsored by any third party, but are made them at his own expense.

Khadka does not just make banners; he also cleans up and paints statues of notable figures like that of martyrs and former kings placed in different places of Kathmandu Valley. The reason behind this Khadka says is to get satisfaction for himself.

“To do what no one else has done and to stand out amongst 30 million Nepalis is a great thing to experience. Not everyone is blessed with this fate,” said a proud Khadka.

ROLPA, Jan 21: As many as 73 youths of Jelbang sacrificed their lives during the decade-long Maoist insurgency. This village... Read More...

Petrol, diesel prices down by Rs 2
1 hour ago
A three-day regional symposium on microbial ecology held in Pokhara
1 hour ago

Will Mahara remain influential in left politics?
2 hours ago