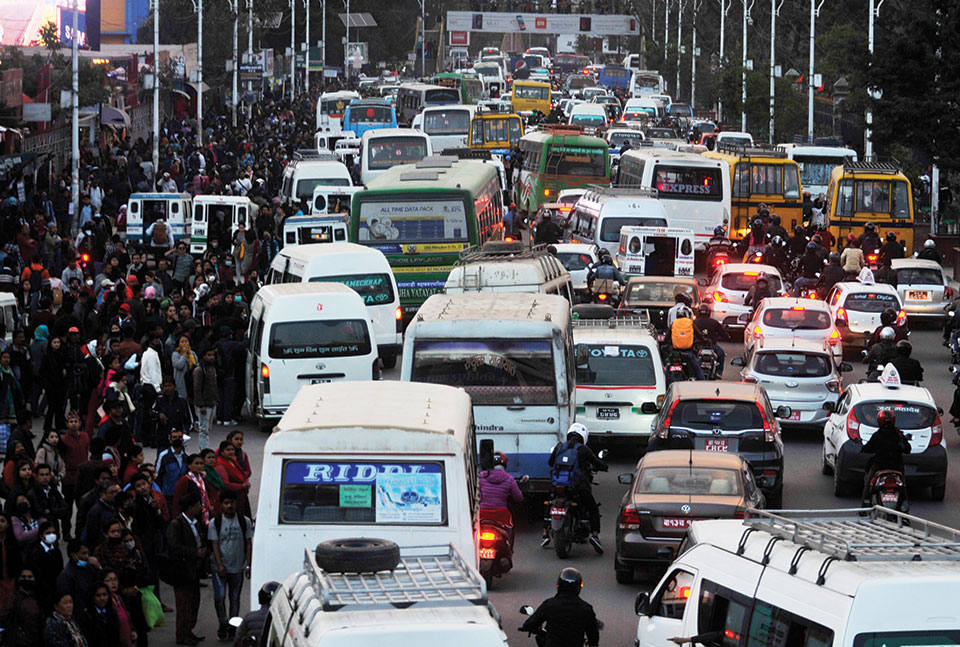 The prolonging terrible traffic jam in Kathmandu valley compels me to think twice before leaving home. The hurdles we face on the road are way too many. The situation becomes horrifying when many a number of vehicles get stuck in a long queue and the roads get totally blocked for hours on end all the way.  Moreover, the side roads and inner roads also face heavy traffic jams since the drivers always seek for the alternatives. Wrong lane driving is one of the major among numerous reasons of traffic problems. About 90 percent driving license holders are either not well aware about basic traffic rules or they totally ignore them.

Reckless driving results in horrible consequences. Only effective penalty will discourage such behaviors. The concerned authority should take necessary action against the individuals accused in these cases.
Interestingly, while the number of drivers penalized for violating traffic rules is increasing steadily, the number of violators is also rising. This is because of less effective penalty system. The Metropolitan Traffic Police Division (MTPD) has collected Rs 122,577,000 as revenue within the five months of the current fiscal year. This includes the fines collected against drunk-driving, lane violation, and haphazard parking. Similarly, Rs 293,145,000 was collected in the last fiscal year and Rs 356,067,000 from the fiscal year before the last. MTPD has also penalized 13, 803 vehicles for not following the road lanes. Likewise, 11 181 vehicles were punished for parking on footpath. Additional 4136 vehicles were penalized for charging more fares to the passengers.

It is worrisome that the two wheeler riders do not follow traffic rules. Mainly, motorcycle and scooter riders do not have patience to wait, which cause road accidents and blockage. The situation becomes horrifying when the large number of vehicles gets stuck for a long time. All alternative routes are blocked and they do not find even a small space for turning, which even damages the vehicles but traffic police often do not take action against the rule breakers.

One of our neighbors residing in England visited Nepal after 18 years to participate in a family function. He hired a car for mobility during his stay in Nepal. But he could not drive because of traffic chaos and also met with minor accident the very first day. He was compelled to hire a driver.

Organized traffic management is not possible only through disciplined citizens. Traffic administration should impose extreme penalty to minimize and control such incidents.

Since the country is importing huge number of vehicles, traffic management is becoming more hazardous and stressful in the capital city. Roads have not been expanded in the same proportion. Besides, there are no enough traffic police personnel to manage vehicle movement smoothly. Growing number of vehicles, narrow roads, unplanned road expansion, insufficient number of traffic personnel are responsible for worsening traffic situation.

Police officials argue that traffic management will be possible only if government carries out road projects efficiently. Take Melamchi Water Supply Project. Roads were dug up in 40 different places of the valley for laying the water pipes which obstructed vehicular movement. This could have been avoided with better coordination and efficient planning.

We see traffic police carrying out vehicle checks on the road. This should be done more frequently but by taking mobility in consideration. Traffic checking during the pick hours could further affect vehicular movement. Thus it should be done in such way vehicular movement is not hampered. According to a recent report, one police personnel has to look after around 1000 vehicles covering a distance of 1.65 kilometers a day. This is not fair. More personnel should be recruited and they should be mobilized efficiently. Installing new traffic lights could be beneficial for both riders and pedestrians.

Roads of capital city lack sufficient pedestrian crosswalks and footpaths. Most of the Zebra Crossings for pedestrians are almost invisible. Even if there are some, they do not ensure pedestrian safety. Pedestrians must be encouraged to use zebra crossings.

Moreover, parking hassles have been increasing rapidly. Unplanned city structure is the main reason of parking problem which has emerged as one of the major challenges in Kathmandu. The state should find a sustainable solution to it.

Only one entity cannot solve the problem. At times, traffic authorities tend to overlook public transportations and target private vehicles. This should be corrected. Dysfunctional traffic lights, signals, inadequate zebra crossings and overhead bridges, unclear lane marks, haphazard traffic parking and many other issues need to be addressed.

The government collects large sum of amount from traffic violators. This money should be properly used. If every sector contributes to traffic management, we can solve the traffic problems gradually. We, the vehicle riders, are as much responsible to run the vehicular movement smoothly.