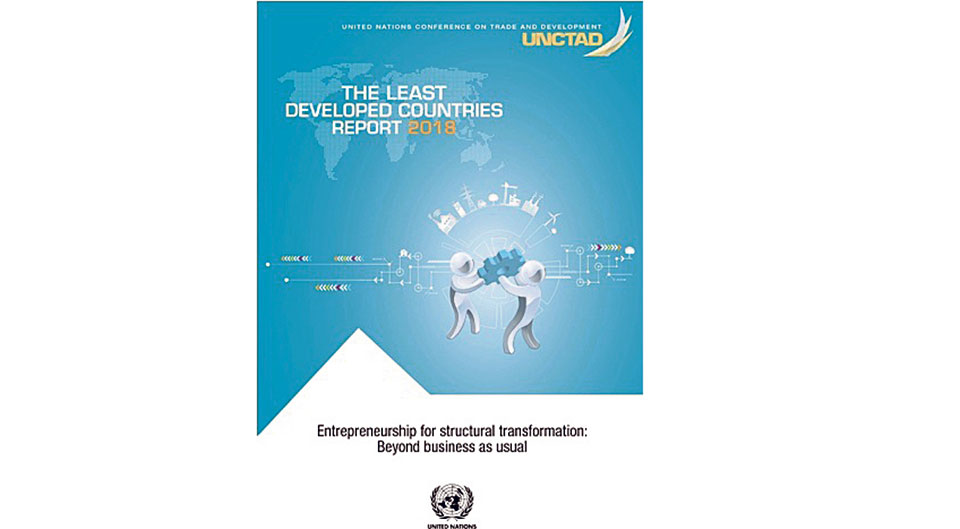 The report looks at the conditions for creating and growing high-impact businesses in the LDCs, a group of 47 nations that includes most of sub-Saharan Africa, some Asian countries along with Nepal, and several island states.

Several structural features of the economies of LDCs tend to weaken entrepreneurship and the growth of enterprises, including limited finances, insufficient infrastructure, lack of institutions, poverty, restrictions on women’s empowerment, high registration costs, and elevated political, economic and environmental risks, according to the report.

“The result is that most firms in LDCs are micro or small enterprises and 58 percent of the formal firms have at most 20 employees,” read a statement of the UNCTAD issued after the release of the report.

The report states that large numbers of people in LDCs are forced into small-scale, low-value entrepreneurship by necessity. “Entrepreneurship is dominated by self-employment (which accounts for 70 percent of total employment), informal micro and small enterprises with low chances of survival and growth and little propensity to innovate. Small companies account for 58 percent of all firms in these countries,” the statement added.

Speaking at a press meet in the capital on Tuesday to brief journalists about the report, Swarnim Wagle, former vice chairman of National Planning Commission, said that the LDCs including Nepal have not been able to create conducive environment to link themselves to global supply chains.

Also speaking at a panel discussion, founders of some start-ups including Tootle and Khaalisisi said that scaling up their businesses has been a major challenge for them.

“The major challenge is scaling up the business owing to the lack of access to financing as the sector that we are working is not even recognized as an industry,” said Aayushi KC, the CEO of Khalisisi, an startup that works on waste management.

KATHMANDU, Aug 20: The Ministry of Labour, Employment and Social Security has given pace to the formulation and implementation of... Read More...

KATHMANDU, May 23: Six amendment proposals have been registered seeking an amendment to the policies and programs for the fiscal... Read More...

COVID-19 risk in Nepal is beyond prediction: Minister Gyawali
2 hours ago

Father arrested on charge of raping daughter
44 minutes ago

COVID-19 risk in Nepal is beyond prediction: Minister Gyawali
2 hours ago