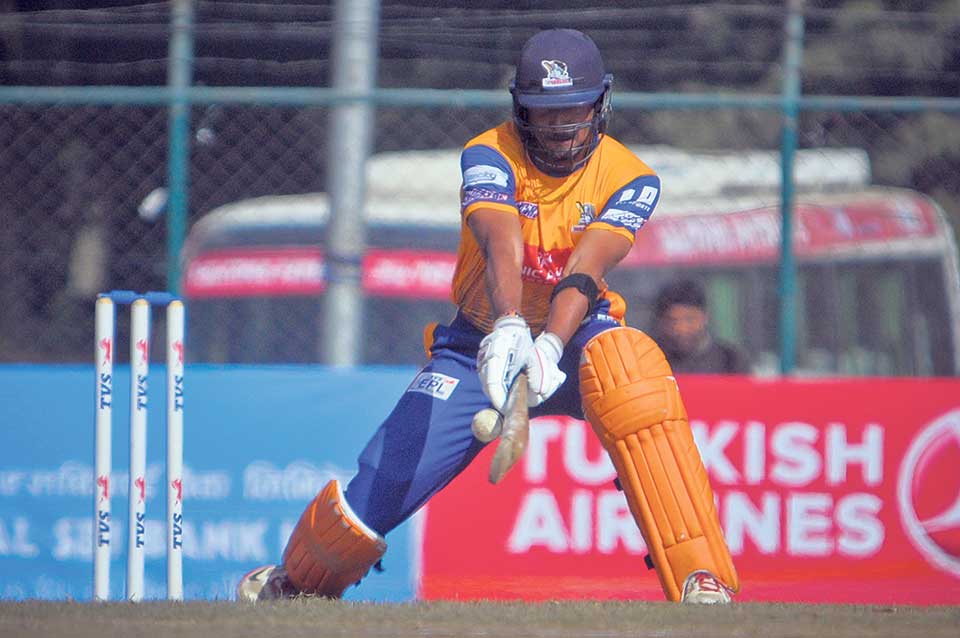 Paras Khadka of Biratnagar Warriors bats against Bhairahawa Gladiators during a qualifier match of the Everest Premier League cricket tournament at the TU Cricket Ground in Kirtipur on Wednesday. Photo: Bijay Gajmer

KATHMANDU, Dec 28: Biratnagar Warriors has moved a step closer to the title of Everest Premier League (EPL) Twenty20 Cricket Tournament, as the Paras Khadka-led side reached the final with a comfortable eight-wicket victory over Bhairahawa Gladiators in the first qualifier match on Wednesday.

Despite the defeat, Gladiators will have another opportunity to reach the final as it will face Lalitpur Patriots (winner of the eliminator match) in the second qualifier clash on Thursday and a victory will ensure its place in the final.

Gyanendra Malla-led Patriots recorded a 27-run victory over Pokhara Rhinos in the eliminator to set second qualifier match against Gladiators.

In the day's first match at TU Cricket Ground, Kirtipur, Paras Khadka's Warriors won the toss and chose to field before restricting Gladiators to 127-8 in 20 overs. In reply, Warriors reached 131-2 in 17 overs.

Sharad Vesawkar-led side failed to make the desired start as it lost openers Bhupendra Thapa (2) and Rahul Yadav (7) cheaply. Gladiators came under further pressure after losing the third and fourth batsmen Vesawkar and Rohit Kumar Paudel for just eight and six runs respectively. Gladiators was limited to 27-4 inside 8.1 overs. However, Aarif Sheikh and Punit Mishra guided their team to the respectable total by smashing 46 and 49 respectively.

Pakistani batsman Babar Hayat continued his fine form for Warriors, an only unbeaten team in EPL, as he smashed a half-century. Man-of-the-match Hayat's 44-ball 62 included five sixes and four boundaries. With a total of 302 runs acquired in six matches, Hayat remains the highest scorer of the tournament. Likewise, the second highest scorer of the competition Anshuman Rath scored 32-ball 26 for the winning side. The Hong Kong international has made 230 runs in the tournament.

Similarly, Captain Khadka remained unbeaten in the match with quickfire 42 runs off 24 balls. He hit four sixes and two boundaries.

Harishankar Shah and Punit Mishra took one wicket each for Gladiators.

After the win, Warriors' Captain Khadka said that all the players of his team are fulfilling their roles effectively. “Everyone is doing well in this competition so far. Foreign recruits Babar and Rath are batting exceptionally and bowlers are also taking enough wickets,” said Khadka.

He also said that his team is still cautious about the final match. “We are one win away to become the champion but caution is still there. We cannot afford to make any mistake in that particular match because that could waste all the hard work made until then,” added Khadka.

In the second match of the day, Patriots was invited to bat first and made a total of 138-5 in the allotted 20 overs. Patriots then bowled out Rhinos for 111 on the back of collective bowling effort.

The winning team Patriots made a strong start to the innings with its openers Jaykishan Kolsawala and Shankar Rana sharing a 60-run partnership for the first wicket.  Kolsawala scored 22-ball 28 and Rana made 34 run-a-ball.

Patriots' innings came under scrutiny after losing its third and fourth batsmen Captain Gyanendra Malla (2) and Kushal Bhurtel (8) cheaply. However, man-of-the-match Sunny Patel guided his team to the respectable total smashing unbeaten 26-ball 38.
Rhinos' Isarullah took three wickets for 14 runs and he was supported by Sushan Bhari who added two more for the Pokhara-based outfit.

Pakistani all-rounder Israrullah was the top scorer for Rhinos with 22-ball 25. Sushan Bhari and Kishore Mahato were two other notable contributors for the team as they made 17 and 23 runs respectively.

Patriots defeat Rhinos to face Gladiators in the second qualifier

KATHMANDU, Dec 27: Six different Lalitpur Patriots bowlers picked up a wicket each in their quest to bundle Rhinos out... Read More...

Gladiators to face Warriors in Qualifier 1