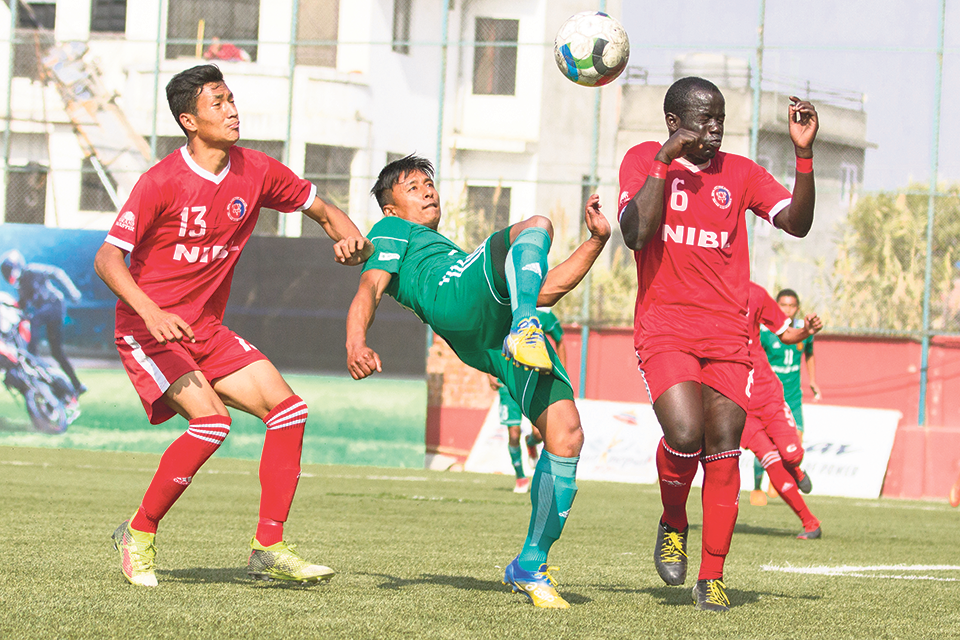 KATHMANDU, Dec 7: The departmental team Tribhuvan Army Club, who was on a chase with the leader Manang Marshyangdi Club, has faced a setback after a goalless draw against Friends Club in Lalitpur on Thursday.

At the All Nepal Football Association (ANFA) Complex in Satdobato, Army had to share the point with Friends as its main player could not play due to suspension.

Army’s main striker and captain Bharat Khawas was out of the match for facing two yellow cards in his first five games, and his replacement Nawayug Shrestha, who played the last 10 minutes of the match, could not do anything useful to grab a win for the departmental side.

Shrestha was out of the playing order due to heel injury and has played only two matches so far. Army head coach Nabin Neupane said that Shrestha is still not fully fit.

Army has lost the chance to stay in the second place losing two points with the goalless draw. Army, who could not perform as it used to in other games, created some chances, but could not convert them.

Neupane said that even though his side shared a point with Friends, it is still in the contention to win the title.

“Even though we drew against Friends, we have the chance to win the title winning the remaining games. We have some tough teams to face, but we are still hopeful of win against them,’’ Neupane said.

“The lack of striker troubled us in the game. The other forwards who played in their places did not do well in the finishing. The team looked in problem as we missed captain Bharat and Nawayug. We had to share a point as we could not finish our chances.”

Friends head coach Ramesh Maharjan said that he is happy with the performance of his players as his team managed to snatch a point against Army.

“We are in a difficult situation and we came to win this game. We were successful in getting a point against a team like Army playing really competitive football which is a proud thing for us. The luck also supported us in the game. I am happy with the performance of the players,’’ Maharjan said.

In the other game played later on the day, bottom sides Brigade Boys Club and Machhindra Club also played a goalless draw.

This is the first game in which Brigade has drawn so far. It had lost four and won just one prior to this match.  While, Machhindra, who has three points from six games, has drawn three so far. No team has drawn more matches than Machhindra in the competition.

The other is New Road Team that is at the bottom of the table with a point from six games.

Even though both the teams created some good chances to score, the finishing for both sides did not work very well. Brigade kept Machhindra under pressure and played well in the first half. Among which, Hritik Khadka

gave a cross to Kailash Basnet in the 45th minute, but his header hit the post. Brigade’s Jaya

Gurung was named man of the match.

After Thursday’s matches, the sixth round of the league has ended. Manang is at the top of the pile with cent percent win. It has 18 points.  Three Star Club and Sankata Club are second and third with 15 points each, while Army is fourth with 14 and Police is fifth with 10. Himalayan Sherpa Club is sixth with 10 as well. 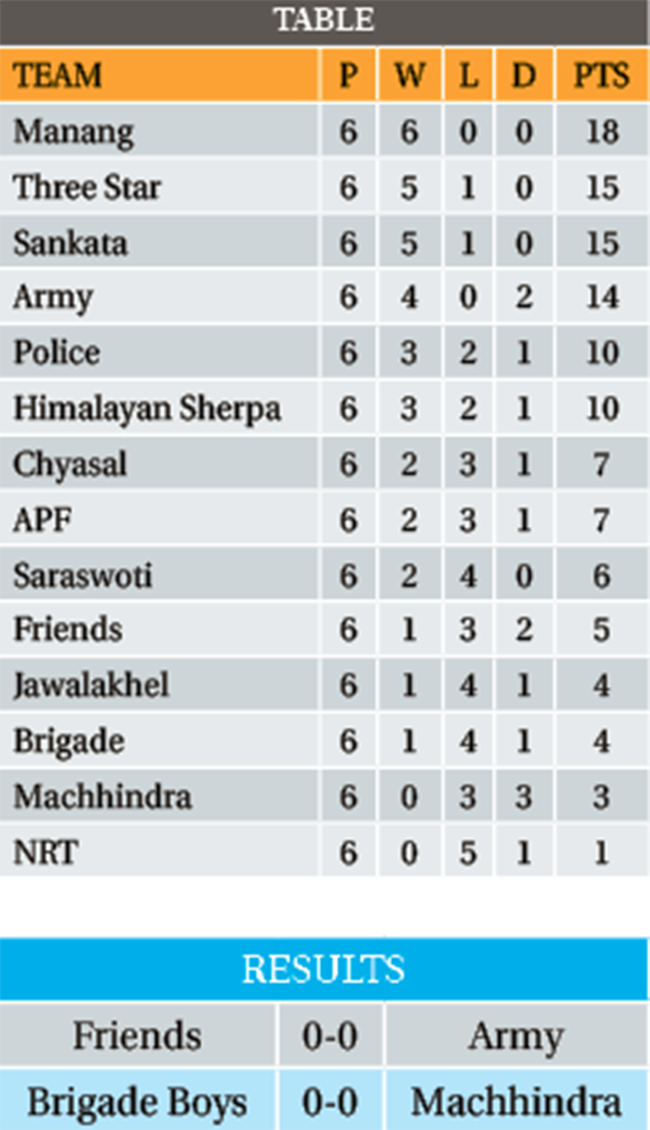