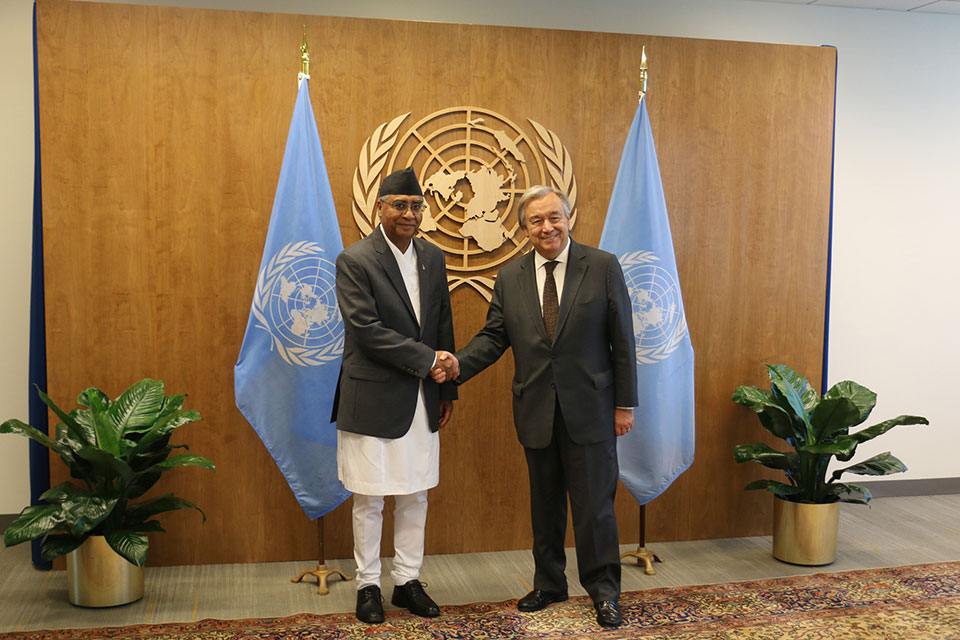 NEW YORK, Sept 24: UN Secretary-General Antonio Guteress has lauded Nepal's efforts for concluding the local level elections in the recent days and wished for the success of upcoming elections.

In a high-level meeting between Prime Minister Sher Bahadur Deuba and Secretary-General Guteress on Saturday, the latter expressed happiness over Nepal's ongoing process to institutionalize democracy, PM Deuba's Foreign Affairs Advisor Dr Dinesh Bhattarai told RSS.
In the meeting held at the office of UN Secretary-General, they exchanged views on a number of issues ranging from the implementation of the Constitution to Nepal’s role in UN peacekeeping operations, and from Nepal-UN cooperation to the evolving challenges to development.

On the occasion, PM Deuba also updated the Secretary-General on recent development including the preparations for holding provincial and federal level elections.

Reiterating Nepal’s commitment to peacekeeping, the Prime Minister called the United Nations for making best use of Nepal’s Birendra Peace Operations Training Centre, oldest in region, and help develop it as a regional center of excellence for peacekeeping training.

The Prime Minister drew the attention of the Secretary-General to the need for placing the LDC and LLDC issues at the centre of the work of the United Nations.

During the Meeting, the Secretary-General also appreciated Nepal’s contribution to peacekeeping operations.

He expressed condolences on the loss of lives and property caused by recent floods in Nepal.
The Prime Minister congratulated the Secretary-General on his appointment and wished him a successful tenure. The Prime Minister also extended an invitation to the SG to visit Nepal.