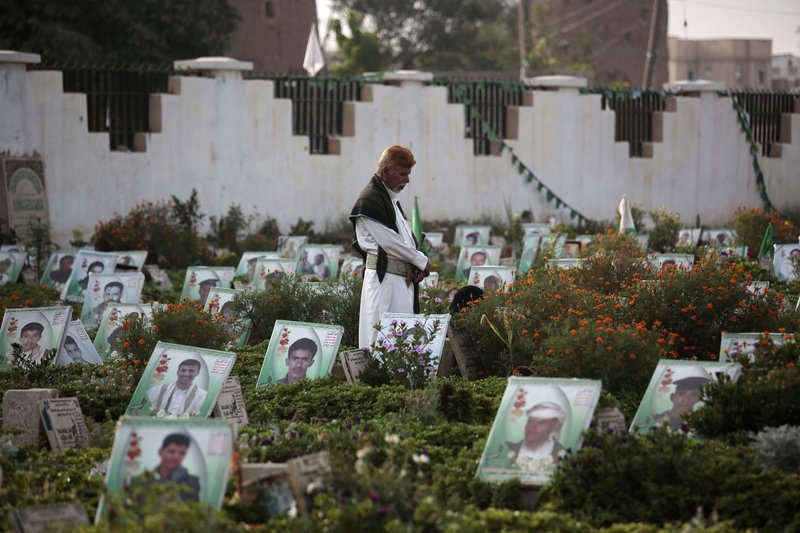 GENEVA, April 25: The U.N. secretary-general is appealing on dozens of countries to boost aid funds for war-torn Yemen, which is considered one of the world's greatest humanitarian crises and faces "the world's largest hunger crisis."

Antonio Guterres kicked off an aid conference in Geneva co-hosted with the Swiss and Swedish foreign ministers, aimed at better addressing a crisis that has been overshadowed by Syria's war and other Mideast conflicts.

"Our humanitarian appeal for 2017 is $2.1 billion and only 15 percent has been met until the present moment," Guterres said in his opening remarks to the gathering in the Swiss city.

About 17 million people are food insecure, he said, "making this the world's largest hunger crisis."

Yemen's war has killed over 10,000 civilians and pushed the Arab world's poorest nation to the brink of famine. Aid groups want improved access to people in need, a halt to airstrikes by a Saudi-led coalition that is fighting Yemen's Shiite rebels, and more respect for international law.

The war pits the coalition of mostly Arab Sunni countries against the Shiite rebels known as Houthis, who seized Yemen's capital and some other areas in 2014 and forced its internationally-recognized government to flee.

Unlike the Syria war, Yemen's conflict has not produced a flood of refugees to neighboring countries — making it a relatively contained crisis that has drawn fewer international headlines. Violence and administrative blockages have impeded the flow of aid and resources into the country.

One Western diplomat, speaking on condition of anonymity to discuss the ongoing discussions, said hopes were high that wealthy Gulf states — some involved in the Saudi-led coalition fighting in Yemen — would step up with greater funding during Tuesday's gathering.

However, organizers insist that aid is a stopgap measure, and that ultimately Yemen's suffering will only end with a political solution to stop the war. They sought to highlight the magnitude of the catastrophe.

"On average, a child under the age of 5 dies of preventable causes in Yemen every 10 minutes," Guterres said. "This means 50 children in Yemen will die during today's conference, and all of those deaths could have been prevented."

"We are witnessing the starving and the crippling of an entire generation," he added. "We must act now to save lives ... we are here today to turn the tide of suffering and create hope."

Nearly 2.2 million children are malnourished, including half a million severely malnourished and at imminent risk of death if they do not receive urgent care, said the U.N. children's agency and the World Food Program.

"Without further action from parties to the conflict and the international community, Yemen is at a serious risk of plunging into famine — with even more children's lives hanging in the balance," said Geert Cappelaere, UNICEF's director for Mideast and North Africa.

Since 2015, about 3.3 million people have been forced to flee their homes, though nearly 1.3 million of the displaced have returned to their home regions, according to the U.N.'s International Organization for Migration. The IOM is seeking $76.3 million in the overall relief appeal.

IOM said Tuesday that it has the highest coverage of any U.N. organization in Yemen, with more than 600 staffers involved in operations in 20 of the country's 22 governorates.

U.N. officials have warned of the prospect of a total collapse of Yemen's agricultural sector and health system, compounded by poverty, environmental decline, and violations of human rights amid the conflict.

WHO's director-general, Margaret Chan, said some 325 attacks have been verified on health facilities, schools, markets, roads, and other infrastructure since the Yemen war escalated two years ago.

Fewer than 45 percent of health facilities are now fully functioning, and the flow of "essential medicines" has fallen by nearly 70 percent, Chan said.

"Health needs go well beyond the prevention of outbreaks," she added. "Conditions like diabetes, high blood pressure, and cancer are killing more people than bullets and bombs."

Is Nepal growing as hub for conference?

SANAA, April 26: Ongoing fighting in Yemen's northwestern border province of Hajjah has resulted in 68,000 internally-displaced families since the... Read More...

Husband and wife trapped in river rescued
54 minutes ago